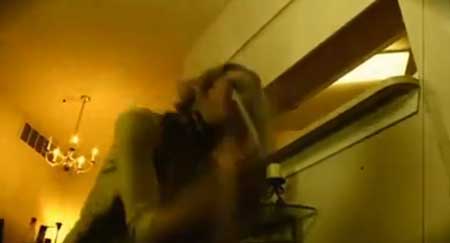 A B-movie actress (Jamie Normand) & her would-be killer (Martin Hovsepian) are trapped and must put their differences aside in order to fight off giant, intelligent spiders, with a deadly agenda to enslave humanity. “Night of the Living Dead” meets Giant Spiders in “Destroy all Spiders!!” – This short film harkens back to those awful 1970′s drive-in monster movies, complete with bad edits, nonsensical plot points, cheesy effects & bad one-liners!!!

Before I start going into the review of this short film, I just want to say that I do understand that it is supposed to be a nod to those old, cheesy horror movies that were completely lame. I do get that. However, I think that the way that Destroy All Spiders was done, in such a blatant, suffocating way, got to the point of being utterly tacky. And that’s never a good thing. There’s ‘being retro’ and there’s ‘trying way too hard to emulate something that wasn’t even worth emulating in the first place’, and I think Destroy All Spiders is definitely the latter. I mean, who uses the grainy film effect anymore? (And that sepia-esque colour scheme that lasted for the duration). I personally thought that these easy ‘add-ons’ worked to the detriment of the movie, but I respect the fact that the director (Juan Diaz) made a creative choice and stuck with it. It’s just a shame that it was the wrong one!

When making comparisons to other films (aside from many of the classic ‘monster’ flicks that I shan’t go into), I would have to use the obvious Eight Legged Freaks as an example. The reason for this is because spiders (specifically alien spiders) are used as the ‘antagonist’, and similarly, there is a slightly tongue-in-cheek atmosphere surrounding the whole situation. I actually found it rather odd that neither of the two main characters seemed too shocked to see these spiders, just accepting it as an everyday occurrence, but the acting was kind of dodgy throughout so this may not have been intentional. Also, I suppose a certain connection can be drawn with Kill Bill, due to the use of different chapters within the film in order to split it into very distinct ‘segments’. Although I thought that this was an interesting idea, I felt that each of the ‘segments’ were too similar to one another and it makes me question whether there were any point to the chapters at all.

The storyline was generally quite contrived and the attempt at character development was rather weak. Neither of the characters ended up being that likeable, and that is almost a death sentence in a film. I personally didn’t really care about the characters and thought they were bumbling idiots, deciding to settle on the spider’s side instead. I am aware that an even shorter prequel has been made by the same director (called Skitter) which offers a back story as to where these mysterious spiders came from, but I think that we should have been given a little more depth in Destroy All Spiders to be honest.

I think that it would be hard for anyone to watch Destroy All Spiders and take it too seriously. I mean, there’s a spider using a gun at one point and an entire subtitled section for the spiders! It’s just so utterly ridiculous that you can’t help but watch with a smile on your face. The spiders themselves were just so pathetic to look at that I actually laughed out loud. It was feebly animated and quite obviously just a toy, and whilst this is somewhat endearing, there does come a moment when you get fed up with the jokes. Watch this if you want a giggle! 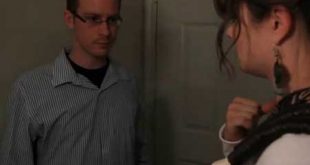