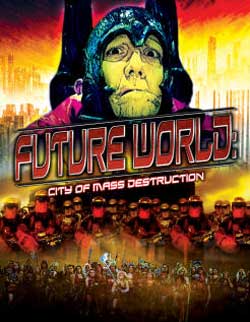 Set in a post-apocalyptic landscape 28 thousand years into the future, “Future World: City of Mass Destruction” is an amazing vision of the last city on earth. After four atomic holocausts and the second Ice Age, only one city remains on our ravaged planet – a city on the edge of insanity, overrun by mutants and madmen, and largely controlled by the tyrannical Devoz Corporation. This dying metropolis is mired in the throes of a power struggle amongst the city’s final three corporate dynasties. The surviving corporation must in the end turn to a tribe of Amazon warrior women it once tried to destroy to save their dying planet. Visionary director Daniel E. Falicki guides you through a world of lesbian warriors, insufferable Grugs, a vicious Spider Queen, and a Blue Genie with loads of “smokable” fun!

Where oh where do I begin with this offering of cinematic vomit… this travesty of filmmaking not even fit for the worst of Canadian amateur handheld films? This piece of useless nonsense that isn’t even fit for the Razzie Awards? Like most things in life you have to start from the beginning which is probably the best part of this garbage scow of a film that, if the producers had an ounce of sense between them, would have scuttled this floating turd before it left port.

The non-descript cityscape stock photo is hit with a nuclear bomb then we are transported through a wormhole with some slacker riding on a rocket ala Flash Gordon. Not ANY Flash Gordon but the crappy, ripped off, 50s Flash Gordon no one asked for, wanted, or watched that you can pick up on DVD out of Malaysia at your local dollar store in the 50% off bin. It simply makes no sense and this is JUST the opening credits. Just wait… it gets worse. 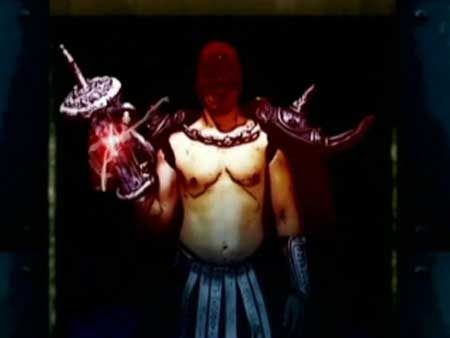 Let us focus on the premise of the “movie” for a moment. The world it is set in has suffered through several nuclear wars AND an ice age. Out of the rubble, ice, and severe nuclear fallout one godforsaken (he’s forsaken anyone who has chosen to screen this believe me) city rises and reigns supreme over a vast nothing. Is the city complete rubbish? Sure. Are the people mutating, deformed, part machine? Of course. You would expect the world to be pretty much devoid of anything but rudimentary technology. Nope. In fact they are fairly technologically advanced. There are swords of course… and magic… and slave princesses… blah, blah, blah.

The story is an old one. The have nots deserve more and the haves still want more and want the have nots to be completely lacking in anything. So it is basically democrats vs. republicans. What sets this apart from anything is that pretty much EVERYTHING was shot on green screen. There is so much CGI is this clusterfudge piece of crap that even Michael Bay would say it’s too much. It’s not even good CGI. Just because Sony Vegas Pro gives you an option to keyout green screen does not mean you should use it… ever. It simply is horrifically bad. Like all infomercials… wait… there’s more!

Acting. Even if a story is bad and the effects are bad and the directing is bad then you can hopefully save the piece with good acting. Think of the acting in Future Word as the zit you get the night of prom. There is not much you can do about it except keep slapping makeup on it and hope no one notices. Unfortunately they put the makeup on with a paint roller after several layers of spackle.
In the world of graphic design there is a technique called comic booking. Essentially you take a photo, run a few filters, and it washes out the photo and adds grainy dots to it as well as enhances dark lines. This effect is supposed to give the look of a printed comic page. Anyone who actually thinks that it is does is very delusional because all it does is make something look sloppy and crappy and it should never be used. Guess what the knuckleheads at Flim Flam Studios did with Future World? They applied this filter to the ENTIRE film! This makes an already horrible offering that much worse.

There is nothing remotely redeemable about Future World. I don’t even want to give it my customary rating because it doesn’t deserve it! If you come across this movie online, in a bin, or wherever the hell they plan on releasing just run away. Run far away. You would get more entertainment by crapping on a paper plate then staring at it for a little over two, grueling hours. 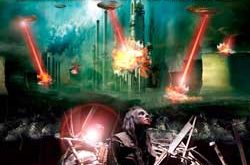