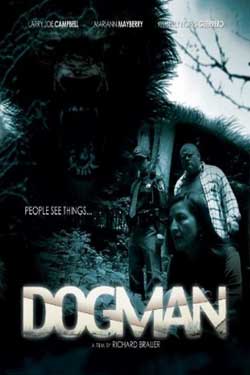 Hanklin Purvis enjoys the outdoors, and he loves to hunt. He and his wife, Dorothy, live on a farm in the rural mid-west. For some reason, during the season before autumn, things start happening. The first victims are family pets, then wild animals. But it’s not until people are injured that the police get involved. The attacker is not human, that’s for sure and it needs to be stopped. Then they discover that the wounds have a deadly bacteria and the clock is ticking for those infected. Enter Hanklin’s neighbor, Francis Wellman, a Native American who believes she has discovered an ancient antidote. And will they ever find the perpetrator of these horrifying attacks?

Apparently, this film was based on a popular local ballad, ‘The Legend’ by Steve Cook (a friend of director, Richard Brauer for many years) for an April Fool’s day joke, which itself was made up of different sightings of ‘dogman’ – there is such a thing as ‘the Michigan Dogman’, which was first reported all the way back in 1887. Richard Brauer claimed that, ‘We’ve all heard the story of the Dogman for 25 years. I like to use something I understand, something I know about. I like to use local resources, such as ships, woods and local folklore.’ He even compares the dogman to famous unproven creatures such as the Loch Ness Monster or Bigfoot. I personally hadn’t heard of that before, but the fact that it has some basis in real life adds a certain amount of intrigue to the whole film. It’s a long shot, but who knows, Dogman could actually be a very accurate story. 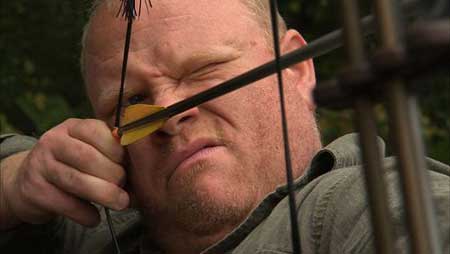 I actually feel like perhaps the title of the film gave away the whole ‘element of surprise’ that Dogman attempted to create. This means that we know straight away what kind of monster we’re dealing with here, so we are just waiting for the characters to catch up to us – which is something of a pain to watch. The point becomes overly laboured and I feel that the audience has been completely underestimated here. We are constantly fed information that we already figured out half an hour ago, why not speed things up a little bit (and even try and catch us off guard with a few unexpected twists). The director, Richard Brauer, says about the film, that, ‘I think it has enough frightening moments, mixed in with real-life relationships and situations to make for good entertainment. There are woodland creatures all over the world that get blamed for things, and our character takes some heat for his share. 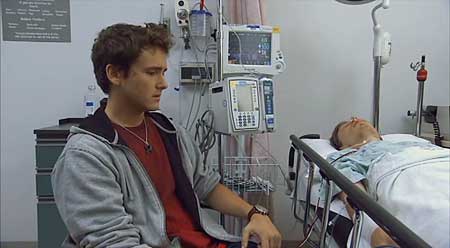 There was a whole lot of build up that by the time anything interesting started to happen, the film was already mostly over. This is a real shame. I also dislike the fact that we don’t get to see the ‘Dogman’ once, not even a sneaky peek! I must admit, I feel a little cheated. I know that The Blair Witch Project managed to be scary without ever having to show the witch, but I feel like Dogman was a different situation entirely. The minimal special effects meant that it wasn’t terrifying at all – I know they say that people’s imaginations are often more horrific than anything that can be shown in horror films, but we need something to work with! The slow pace and lack of any adrenalin-fuelled action severely hindered Dogman’s chances of becoming a horror classic. There are a few jump scares and the music was wonderfully subtle, but the acting was fairly average. 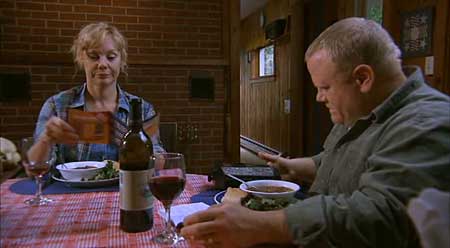 Dogman is focused mainly around an outdoorsy fellow and his wife, who begin to notice strange happenings outside their house (they do live in the middle of nowhere!). As things start to escalate, the man’s nephew gets bitten by some kind of beast and this inspires him to look into these bizarre events in more detail. In fact, he becomes obsessed. The film explores the legend of Dogman being slowly uncovered, hopefully in time to prevent any more victims. But they have a mightily difficult task on their hands, and they definitely need to work together in order to successfully overcome the Dogman.

I didn’t like the ending at all, and unfortunately this rather tarnishes my opinion of Dogman in general. I thought that it was pretty lame and could have done with some extra development, just to conclude all of the events that have happened. It took so long getting to this point, that it’s silly to leave the ending hanging wide open. 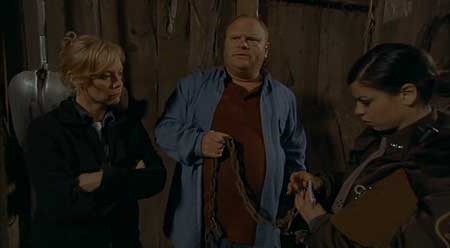 The British film Dog Soldiers, where a group of soldiers out training in some woods come across what can only be described as werewolves, is slightly similar to Dogman. In contrast, the creatures in Dog Soldiers can transform people into werewolves by biting them, whereas in Dogman, the poor victims simply die from their wounds after a short while. Obviously, Dog Soldiers is a lot more violent and gun crazy which makes it an entirely different movie, but the fundamental backdrop is very similar. As far as what kind of movie Dogman is, I’d even be tempted to liken it to The Ring (which may seem a bit of a stretch, but hear me out). It involves the main characters putting together various pieces of the puzzle to solve the mystery of what this creature in the woods is. Especially when one young man gets bitten, as a time frame is then put onto it, requiring them to work out how to save him before it’s too late. There’s something mythological about Dogman, that’s for sure, to the point where it almost feels like the normal laws of nature don’t exist. Like a werewolf who just sneakily takes some keys from inside a car? What the hell is that all about? 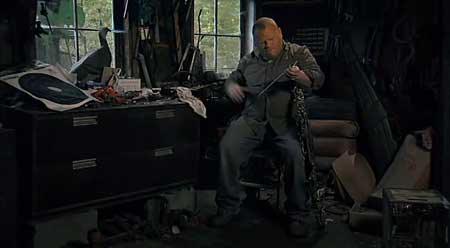 I’m also intrigued by the fact that there is just one police officer working in that entire film (and that she happens to be a beautiful young lady). You’d think that once the case started to get big, someone else would join her, not just a bunch of useless civilians. They turn up to the recorded sighting at night time (what?) and completely unprepared for what we all know is out there.

Basically, Dogman was pretty average. It’s not all that memorable or all that exciting, but it wasn’t completely horrible to watch either. Give it a chance, sure, but don’t expect any greatness to come from it. The first day of its screening was doubled as a fundraiser for the Paul Oliver Memorial Hospital Auxiliary, and I definitely approve of the charitable gesture, but does this make up for the lack of quality of the film? No, sadly not.