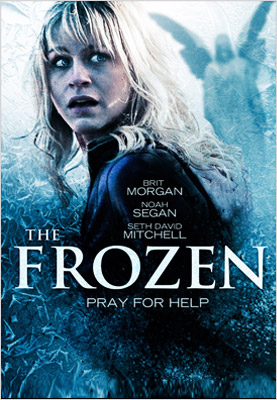 After a harrowing snowmobile accident, a young couple is stranded in the woods and must survive while waiting for help to arrive. Events take a turn for the worse after the disappearance of Emma’s boyfriend, leaving her on her own not only to battle the elements, but also to elude a mysterious hunter who is tracking her through the forest.

“The Frozen” certainly centers itself in a mountainous winter environment, but usually when I see a film with the term “frozen” in its name, I assume more or less a film about surviving the cold. Now “The Frozen” does have its share of that as the story evolves, but it also makes a clever play for supernatural content. I suppose that is about all I can really say on “that” subject without giving the clincher away. “The Frozen” is a great mash-up of adventure and horror brought together under a scenic setting.

Our story begins with a young woman named Emma (Brit Morgan) who has just discovered that she is showing positive on a pregnancy test. Her boyfriend Mike (Seth David Mitchell) has planned a winter getaway camping trip for the 2 of them to enjoy a romantic weekend in the mountains (Carbondale, Colorado). Mike, who has just purchased a new snow mobile is anxious to get them out into a private location so that they can enjoy the quiet times and fresh mountain air. Emma is reluctant but goes along with the idea to make Mike happy. Soon they arrive and head out on snowmobile up into the mountains for a scenic spot that they can set up camp. It’s all very romantic but ladeled in tension as Emma fears that Mike has taken them to a situation that is outside their usual scope (or training). The 2 of them set up camp, build a tent, and keep a nightly fire burning. Emma who is facing a pregnancy in process is a bit tense most of the time with the secret she has yet to tell Mike. 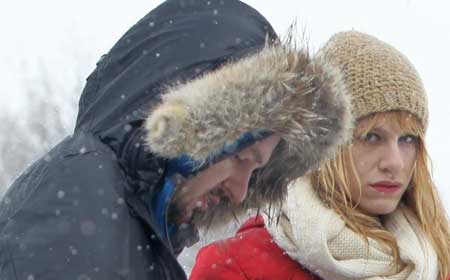 Everything seems to be going as planned until they hit a rough spot in their snowmobiling trek that sends the 2 of them flying off head first. They awake to find that the snowmobile is not working which sets the tone for concern. As they head back to their tent, Emma begins to see a man (Noah Segan) in the forest who keeps disappearing out of view.

It is at this point that the film begins to takes on a typical thriller premise. Worried about a potential intruder, the 2 of them try to keep things together while Mike works on fixing the snowmobile. Emma begins to emerge as the clever one when she finds herself alone against an unfamiliar environment in the middle of nowhere. Actress Brit Morgan takes the lead with a gradual increase of worry and dread that gives you the sense that you “might” of seen this scenario before in another film or 2. Though what really works here, is the 3rd act which has its share of misdirection tactics to throw you off. In all, Brit Morgan gives a solid performance in this opportunity to step out from her usual True Blood series role (Debbie Pelt – aka Alcide’s girlfriend). 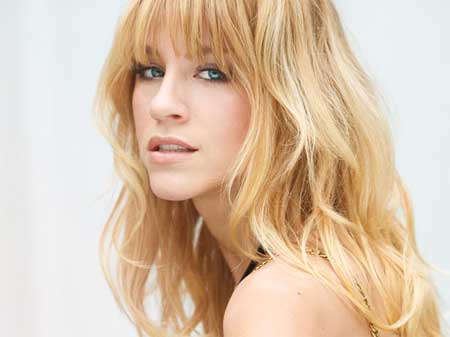 Director Andrew Hyatt makes his directing debut who’s previous work is listed as being an assistant on several pretty well known films. Hyatt proves that he has a great sense of story telling aimed at keeping your attention.”The Frozen” works on a simple level that uses its environment to provide a perfect setting for the story and the subtle errieness. I didn’t notice that the budget on “The Frozen” was estimated at $1,000,000, which seemed a bit high, for what you ultimately end up with.

FX work was very minimal in the sense of showing “phantoms” with simple airbrushing applied. It might have lost points on this end, if not for the fact that the FX were not what this film was about. In the end it leaves you with a sense you often get with “feel good” style films proving some clever reveals and a …”now I get it” finale.