On New Year’s Eve, a small town sheriff hosts a party at his cabin in the woods; on the way home, one of the party-goers drunkenly desecrates a native shrine releasing a terrible curse.

This movie has, on the face of it, all the elements to make a classic horror film: a literary source; a cabin in the woods; an ancient curse; an evil awakened; a B-movie icon in the cast. They’d have to be pretty clueless to mess it up from there, you’d think. Well, even taking the low budget and low ambition into account, that’s exactly what has happened with this dog’s dinner of a movie. Every aspect of it is so far below the required level that it’s comfortably the worst film I’ve seen this year.

The problems begin right from the get go. A female narrator starts relating the tale with as much enthusiasm as someone at the end of a double shift at an all-night garage. Okay, she may not be entirely familiar with the work of Rudyard Kipling but if you’re doing the opening narration for a film the least we should expect is some verve. The narrator explains that east of the Red River the normal rules of fate no longer apply and man is at the mercy of the gods of the forest. This hasn’t stopped local Sheriff Strickland (Dick Boland) having a New Year’s Eve knees-up at his log cabin to which, among others, he has invited his friends Fleete (Film Threat’s Phil Hall), Debbie (B-movie scream queen Debbie Rochon), Maggie (Margaret Rose Champagne) and Natalie (Ellen Muth).

After many hours of heavy partying, Fleete is obnoxiously drunk so Strickland and Debbie volunteer to walk / carry him home through the woods. On the way, the trio stumble across a native shrine which the insensible Fleete desecrates by burning a mark on the idol with a cigar. Out of nowhere, a silver-coloured, horribly disfigured creature appears and bites Fleete on the chest. Strickland and Debbie manage to drag Fleete back to the cabin and put him to bed. The following morning Fleete appears none the worse for his heavy night, apart from a severe craving for undercooked meat, but events take an alarming turn when Fleete takes a bite out of Maggie’s arm. The friends manage to subdue the now raving Fleete and slowly begin to realise that his condition may be linked to the desecrated shrine. 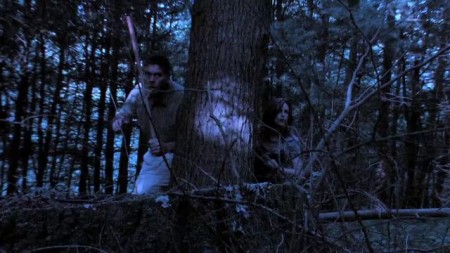 A sound enough plot, you might think, and you’d be right because it’s remarkably faithful to the Kipling original apart from having been updated to modern times. The trouble is all in the handling. The cinematography looks dreadfully cheap and has an unfortunate pink / orange tone to it which just doesn’t look right. Furthermore many of the interior shots are very badly lit – one sequence around the breakfast table looks like it’s taking place in total darkness. The exteriors are not much better: the light doesn’t match in a number of shots and some conversations take place with neither character visible.

Similarly, the characters and situations never even remotely appear convincing. While I can (just about) swallow all the characters arriving at an isolated log cabin on foot, when they get there two of them – dressed in party gear – immediately, and I mean immediately go canoeing. The log cabin itself appears to be a very badly stage dressed public space; I mean, who has an ‘Exit’ sign in a private house? The party is ludicrous with the only entertainment on offer appearing to be a table top spinning skittle game. There’s no actual party music but there is the ever-present extra-diegetic music. The partygoers sing Auld Lang Syne even though some of them clearly don’t know the words. I could go on but am in no mood to tackle how bad the acting is; suffice it to say it’s of a standard that is in keeping with the rest of the production.

It gives me no pleasure at all to trash a film in this way. Every time I sit down to watch a movie it’s in the hope that it turns out to be brilliant, and that’s especially true for low budget horror. In most cases even if the film doesn’t quite work it’s generally possible to find some redeeming qualities. However, I’m sorry to say that MARK OF THE BEAST defeated me for I can find nothing to say in its defence other than that it’s mercifully brief at around 70 minutes.