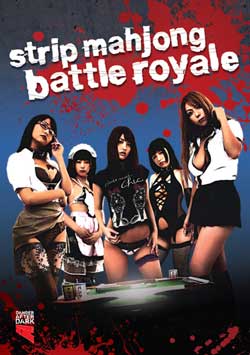 A handful of mysterious Japanese women take part in a deranged web show that makes them strip off their clothes when they lose a round of Mahjong. When there is nothing left to hide, secrets are revealed and they must take their punishment.

You have to love a film that is completely transparent like “Strip Mahjong: Battle Royale”. We are greeted with a small smattering of hotties on the front cover and told thru the synopsis that they have to take their clothes off in order to win “the” game or be punished. To be more specific, a battle of “Strip Mahjong” must be played under lock and cages at the mercy of the host Kato and his quirky assistants. You see these women all owe “alot” of money, 5 million to be exact (really??). As a repercussion…well, they have been kidnapped, brought in, (in chains) and forced to play a game while being broadcasted per pay per view. The front end is really a ploy for an easy exploitation session with Asian women who come in fully dressed under different background as and slowly are made to discard their “outers”. This is prompted by the zany host who calls the shots each round while occasionally telling us about how the stripping is relative to one’s soul (sure thing…bud). His assistant Ranran, helps to keep the game in play while a masked G-string enforcer awaits in the background. 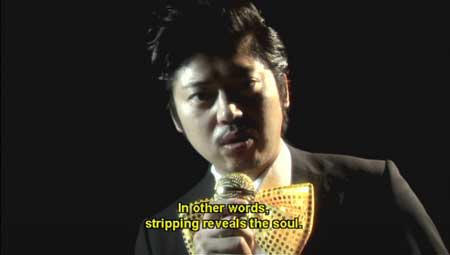 The contestants are: “Aftershock Expedition” singer Yuka Kashiwagi, top class lawyer Aoi Onizuki, Uptown girl Misozu Kaneda, and freeter (whatever that word means) Mirai Kisaragi. The winner will of course be relieved of their debt with the prize listed as a whopping 10 million. They are all equipped with electrocution neckbands used to dispose of the losers. 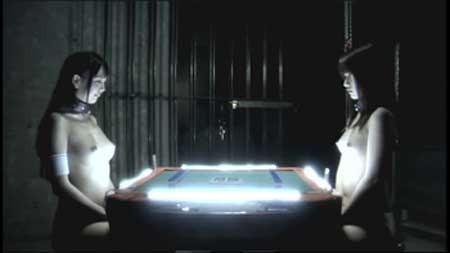 The game “Strip Mahjong” actually made no sense to me, as it’s some form of Asian card game that I couldn’t make heads or tails of. Though it is set up like a combination of scrabble and poker using “tiles” and a battle of wits. Thru the game, you’ll hear them yell out “bra top”, “Haneman”, “Hellwait” and things like “discard titles”. But hell, do we really need to understand what it all means??

Easily…….. the film is an excuse for stripping hotties down to their underwear before moving on into full nudity. Host Kato makes it even weirder as he teases the girls in a cage before ripping their bras off for television. There are told that they “could” end up being punished which I thought would be alot more edgy and gruesome. Though for viewers, this really isn’t a horror film. The most that happens is a neck zap or an awkward tit feel. You’ll know things are ramping up by the films announcement of “lingerie time” (This opposed to the later “punishment time”). 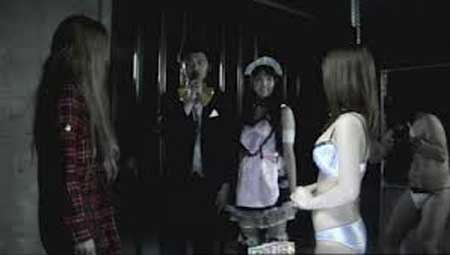 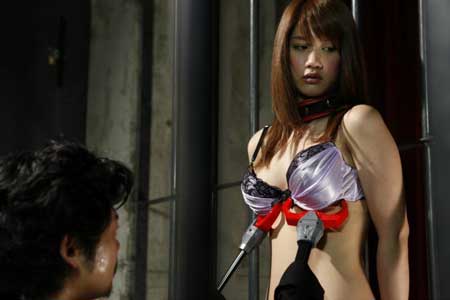 “Strip Mahjong: Battle Royale” is a film designed to play to an older exploitation trend, but fails in the horror department. I suppose I was anticipating an derivative movie that mirrored something like “Red Room“, however, this film is really just a drawn out striptease. As long as you know what “kind” of film this is, you’ll be alright. Kato is good for a few laughs as a pretty wacky game show host, beyond that it’s a countdown to full frontal. There is not alot to talk about on this one which focuses on game playing and bra discarding. 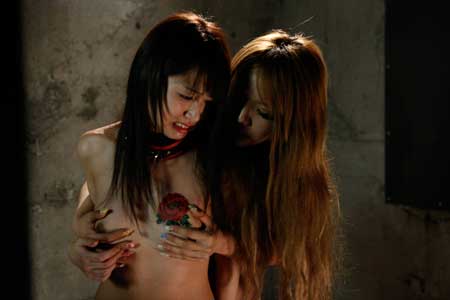 This “winner take all” premise has been done before and will be done again. Strip Mahjong: Battle Royale is indeed sexy and a bit quirky with plenty of indulgent camera shots (and a touch of dyke action added for good measure). I’m not convinced that I ever want to play “Mahjong” myself, I think plain old poker will suffice. This little ditty comes from the production teams of Jolly roger and Danger After Dark. 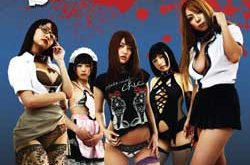