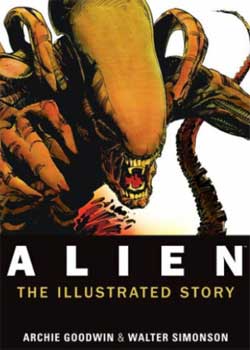 Alien has to be one of the most merchandised genre movies. From books to toys to video games, the sci-fi classic has been spun off into countless forms. Its profitability is no surprise; I’m not alone in considering it among the greatest films of all time. Shortly after the movie’s release in 1979, the story was adapted into comic form under the name Alien: The Illustrated Story. After being out of print since the original run, the acclaimed graphic novel has been restored and reprinted courtesy of Titan Books.

Like its film counterpart, Alien: The Illustrated Story begins with the calm before the storm. A commercial starship is shrouded in silence before its 7-member crew is awakened from hypersleep. I’m sure you know the story: after the crew investigates a nearby derelict spacecraft, an extraterrestrial makes its way aboard the Nostromo and takes them out one by one. It’s up to Warrant Officer Ripley to exterminate the alien.

The graphic novel is faithful to the film. Many frames mirror Ridley Scott’s artistic direction and H. R. Giger’s beautiful set design (although the novel may have been created before the film was completed; the actors likenesses appear regardless). All of the iconic imagery is intact: the mysterious space jockey, the dank ship, the facehugger, the shocking android reveal and, of course, the full-grown xenomorph. The most recognizable image – the chestburster eruption – receives a gorgeous full-page spread that’s suitable for framing.

Alien: The Illustrated Story is written by the late Archie Goodwin (as based on Dan O’Bannon’s original screenplay) and drawn by Walter Simonson, with lettering and design by John Workman. Some tension is lost in whittling the 2-hour film down to a 64-page comic, but it remains a pulse-pounding, if brisk, execution of sci-fi-horror. The novel also includes some minor moments that were deleted from the film. My single, tiny complaint is that it doesn’t conclude with Ripley’s “signing off” dialogue; instead, it’s bookended by silence once again befalling the ship.

Titan’s new edition of the novel is approximately 8″x11″; a different scale than the original. It’s softcover but firm, printed on a nice, glossy stock to make the colors pop. The artwork has been meticulously digitally restored from the original artwork. You can see that the images were painstakingly colored by hand (with five credited colorists), long before modern computer colorization technology existed. Minor imperfections like slightly crude gradients only add to the appreciation; the artwork is vibrant and stunning.

Adapting a motion picture into another form of media is no easy task, and crafting a successful graphic novel is just as difficult. Between the superb source material and the talents of Goodwin and Simonson, Alien: The Illustrated Story beats the odds and remains effective more than three decades later. Whether you had the graphic novel during its original run or were unaware of its existence prior to now, Alien: The Illustrated Story is a great companion piece for any Alien fan.