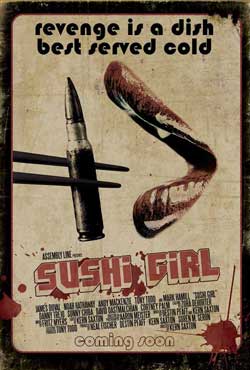 Six years after a jewellery heist had gone awry the band of would be wealthy thieves reunite. Will their union be strictly for nostalgia purposes or is there something more sinister in the air?

Gritty, violent and unapologetically exploitive, Sushi Girl embarks upon an all new level of torturous unease. From scene one the audience senses a churning sensation of rising tension. A beautiful, innocent young woman (Cortney Palm) is applying makeup before a mirror and we feel her anxiety. Duke played by Tony Todd approaches her from behind. Under any façade he’s a most imposing, intimidating individual, yet the director’s use of panning to varying close ups as he whispers lethargically into her ear is a terrific set up for the shape of things to come. 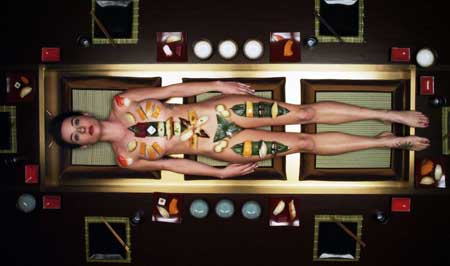 Fish, an ironic enough name played by Noah Hathaway is newly released from prison. Having served a six year sentence he’s been summoned by Duke to an undisclosed location. One by one the remaining band of would be wealthy thieves reunite in an abandoned Japanese restaurant. Lying in the midst of the action is one completely stark naked woman on the table with a few delicacies of sushi arranged here and there. If there was ever a more vulnerable position I’m at a loss to come up with it at this moment.

The film takes a gradual, darkened turn. The setting is ideal for such circumstances. Lighting has been compromised, dim almost to an intimate level. It seems the remaining four Duke, Francis, Max and Crow have a score to settle. They never retrieved their cut for the heist and feel their estranged comrade in arms Fish is holding out on them. 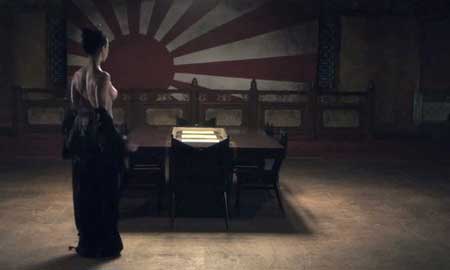 Much of the tone of Sushi Girl relies upon dialogue which I find remarkably refreshing. All too often an exploitation flick will rely far too heavily on the obvious gratuitous nudity, violence, drug use, the epitome of what most exploitation is. Sushi Girl raises the bar beginning with Todd’s speech face to face with a duct taped restrained Fish. The context of his emotional fuelled anecdote is enough to chill the very bones of even the most hardened of cynics.

A ticking timer is utilized to count down in increments of ten minutes, allowing Fish full disclosure of the prize. In pulsating suspense we await a seemingly inevitable breakdown only to witness an onslaught of ruthless aggressive persuasion.

Some much welcomed comedic interlude is offered at the peak of dread in the form of Crow played by Mark Hamill. The actor best known for Luke Skywalker steals the show in all his flamboyant grandiose that will render any fantasy fan speechless. The ongoing rift and conflict between him and the character Max played by Andy Mackenzie is priceless and leave you laughing with guilty pleasure in near hysterics. Few could ever for see a moment in cinematic history where the actor best known for Skywalker brutally inflicts punishment on Fish or Hathaway best known for the child actor in the Never Ending Story films. 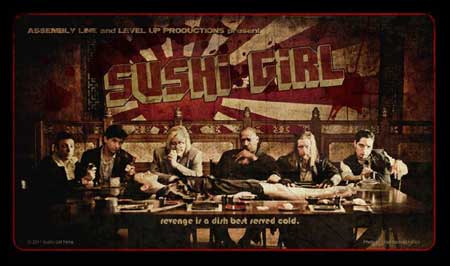 The director delves back and forth into some needed exposition of the botched heist. Many of the sequences peel back the layers of greed, desperation and betrayal psychologically and invest the audience further into the tale. A delightful cameo from Danny Trejo, wielding a machete is well received from the audience that sadly is over as quickly as it had begun. There is also some deceantion in the ranks as we begin the question the motives of one reluctant Francis played by James Duval. Francis meets a rather untimely demise as we get a glimpse into his involvement in the reunion.

Although the special effects and makeup may appear subtle from the onset, their role in depicting effective imagery is paramount in Sushi Girl. As each frustrated and desperate character unleashes their brand of torture the character of Fish is rendered grotesque and brutalized. Clearly the visuals are not for the squeamish as each ups the ante in hopes of getting a full confession from their fellow degenerate. The sounds of whirling wind from Max and he spirals a loaded sock with broken glass is hauntingly eerie. The aftermath of Fish’s filleted face is testament to these thugs mean business. 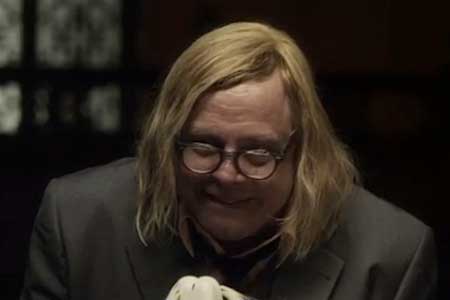 Perhaps the most unsung involvement of the film is of course Palm’s role. She’s provided some critical instruction at the beginning of the film to remain completely docile, nude on the table to simulate a tasty dish, no less. No easy task to remain motionless, oblivious to your surroundings while such havoc is unleashed at your very finger tips around you. If you’re under the impression her role remains at this you’re in for a very unsettling surprise. Although Sushi Girl may not be for everyone, the squeamish at heart it is most definitely a rare delicacy for the rest of us. After all isn’t that what sushi is all about? 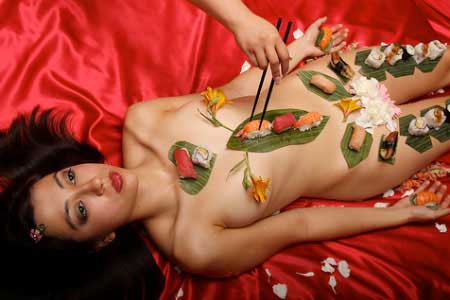 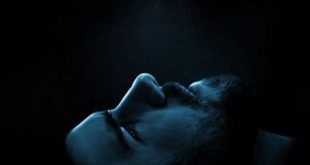