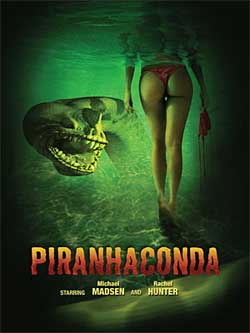 At personal risk to the ragged shred of integrity I still grip like a sleeping baby clutches a binky, I must confess that I have a soft spot deep in the c**kles of my heart for SyFy Channel movies. What else is there to do on a lazy weekend afternoon with a case of Pabst Blue Ribbon and no place to go? Better yourself with a good book? Pshaw, this critic says.  I’d prefer festering in the sweet stink of atrophy to the likes of “Behemoth“, “Mega Shark vs Crocosaurus“, or my personal favorite, “Iron Invader.”  Any one of the million or so titles the network has been cranking out since the mid-nineties makes for an enjoyable diversion to productivity (defined here as “anything other than watching SyFy flicks”), if not high art.   Lately, savvy schlockmeister Roger Corman has jumped aboard this boundless money train, serving as Executive Producer for many of the recent entries in their dubious catalogue.  “Piranhaconda” is one of his, again employing director Jim Wynorski to take the reins.  Wynorski, after creating one of the great guilty pleasures of the 1980’s with “Chopping Mall“, has built a vast and varied portfolio of exploitation films, most of which you’ve never heard of and are better off for that blissful ignorance.  Trust me, only benefits can be reaped by possessing zero knowledge of “Busty Cops”, and my sincerest apologies for ever mentioning it. 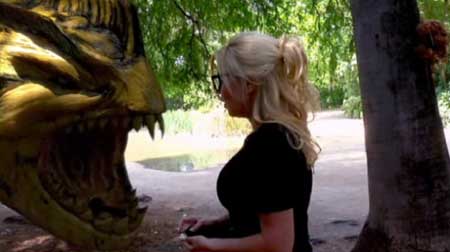 Even by the low standards the SyFy Channel gleefully embraces, “Piranhaconda” is a repetitive hot mess.  The ridiculously large cast serves as a human buffet for the titular beasties, employing the same tired CGI effects with nearly every single gory kill.  Person sees colossal snake/fish, person shrieks, snake/fish bites off some, most, or all of said person, leaving behind a bloody red mist that only seems palpable within the frames of such films.  Over and over and over again.  In the midst of this bromidic carnage are approximately twelve differing plots and subplots, only two of which ever converge into cohesion resembling a story.  Professor Lovegrove (Michael Madsen), his father a victim of the piranhaconda’s wrath years prior, has been relentlessly pursuing what the Hawaiin locals refer to as the “River Devil” for at least five minutes or so at the onset.  He also desires to prove its existence in the scientific community, therefore cementing his name in zoological history.  Why does this character require two separate justifications for his obsession?  The reason couldn’t possibly be to showcase Madsen’s acting chops as he relates his old man’s fate, since he seems to bear the distinct look of chagrin worn by a man two seconds away from screaming, “But I was in ‘Reservoir Dogs’!”  I’d seen the same expression across Chris Penn’s countenance post-“Dogs” as well. 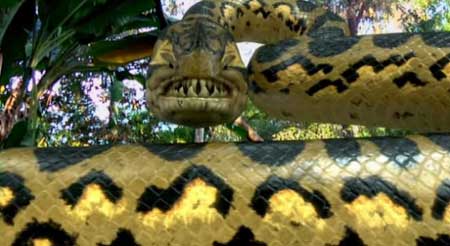 We are also initially introduced to the cast and crew of a slasher flick entitled “Headchopper III”, which sounds like a pleasant viewing dream compared to “Piranhaconda.”  They are shooting on the same island of Kaua’i, and consist of the usual Hollywood stereotypes who permeate horror movies and are most likely closer to reality than one would like to believe: The spoiled starlet KImmy (Shandi Finnessey), frazzled director Milo (Chris De Christopher), hunky stunt man Jack (Rib Hillis), wisecracking pyrotechnic engineer Gunner (Kurt Yaeger), and good girl production assistant Rose (Teri Ivens).  They are brought together with the Professor by a band of gun-toting ruffians led by Michael Swan as ringleader Pike, who happens to be the only player involved aware that nobody should be taking any of this nonsense seriously.  The . . . rebels?  Missionaries?  We’ll stick with ruffians, because I love any excuse to use the word.  The ruffians kidnap all involved in hopes of a big ransom payoff for their safe returns.  Their devious plans are soon thwarted by the piranhaconda, now joined by an equally hungry and cheesed-off mate.  As with all of SyFy’s productions, there is little mystery in contemplating who amonst this group will live and who will be gobbled up, littering beautiful island terrain with the aforementioned claret cloud and a body part or two. 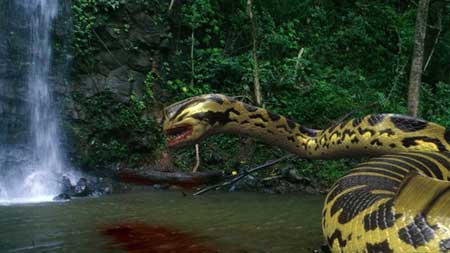 There is a minority of moments throughout that hint at a fleeting sense of tongue-in-cheek fun here.  When his mistress and cohort Talia (Rachel Hunter) coins the term “piranhaconda” to describe the creatures, Pike responds, “I can’t believe you just said that,” a knowing wink to other Corman-produced features for the channel.  A minor supporting character, sealing his own fate, declares early on that nothing bad ever happens in Hawaii.  Former p*rn star Angie Savage is also on hand to provide a laugh or two, if only just by being Angie Savage.  It always warrants chuckles when “actresses” first attempt to break out of the adult film industry, because they often still look and act as though reciting lines from “Foreskin Gump.”  These passing morsels of levity are merely a hint at what could have been, however, making the largest sum of the movie’s parts all the more grating. 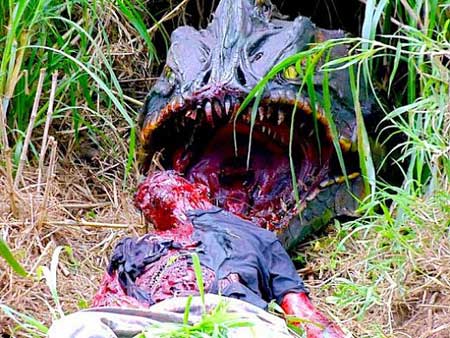 “Piranhaconda” is not unbearable.  It flirts with utter tedium, but never crosses that line into boring rubbish.  It is merely rubbish, and one would have to be morally bereft to tongue-lash SyFy, Corman or Wynorski for its inconsequential existence.  Not a single one has ever made an unkept promise in regard to their crafts, and to expect more would be akin to asking my cat to perform long division.  Truth be told, I may have actually appreciated “Piranhaconda” much more had I screened it after that case of Frank Booth’s favorite, as opposed to during.  Lesson learned.