This Halloween brings a third feature from Graham Jones whom VARIETY calls “a very talented director”.

THE GREEN MARKER SCARE is an Irish horror movie animated by children that contains virtually no sex or violence but which according to Jones may be even scarier as a result.

“Explicit or effects-driven stuff has never interested me as a filmmaker,” Jones says. “It’s always been my sense that what you don’t show is more powerful. I’d wager THE GREEN MARKER SCARE is more disturbing than any big-budget American horror this year because not only does it deal with people who prey on children but was actually animated by a group of children. It has a terrible authenticity.”

A father of three himself, Jones ensured that he was ethical in the making of the film and has a history of dealing provocatively with challenging issues like suicide, nomadic communities and schizophrenia in his movies and books. He also favours female protagonists. The main character in THE GREEN MARKER SCARE is an Irish girl-sleuth called Noreen who discovers that something very sinister is taking place in her small country town.

“We decided to start with the old mold of the girl-detective,” Jones says. “But instead of giving her harmless art burglars to deal with, throw her the worst thing imaginable and watch her mind grapple with it. The penny still hasn’t dropped about Ritual Abuse in the 21st century and that made it interesting for a naïve cartoon character to stumble across.”

Jones’ new film is also unusual in terms of distribution which is testament to how much the media landscape has changed since he began making films. His debut HOW TO CHEAT IN THE LEAVING CERTIFICATE went on general release in cinemas all over Ireland, his second movie FUDGE 44 offended Japan on DVD and now his third THE GREEN MARKER SCARE is premiering online until the end of November – link jumps straight to trailer: 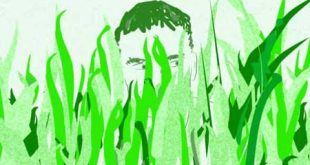