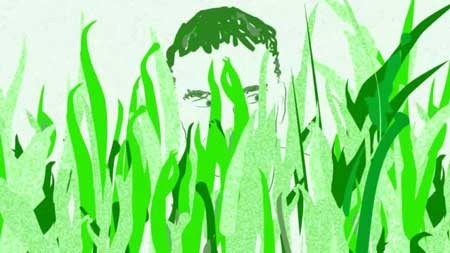 Starting as an old-school sleuth story, young Noreen begins investigating the suspicious circumstances surrounding her father’s death, uncovering a shocking and sinister conspiracy that has been wreaking havoc in her hometown for years.

Got a feature film this time, just to be different. And this is totally different. Today we have THE GREEN MARKER SCARE, an animated film from Ireland, written and directed by Graham Jones.

I got to watch the original trailer for this film, and see the tagline which is – “…if horror films made by adults don’t frighten you, try watching one made by children”.

Now I know what you’re probably thinking, and it’s probably not too far from what I was thinking. We are both wrong. The film is written and directed by Mr. Jones (who is decidedly a grown up) but the animation on the film is all done by hand in shades of green marker (ergo the title, I suppose) by school children from Counties Cork, Limerick, and Tipperary in Ireland. The story in this film is decidedly grown up as well, but there is a placard right at the beginning of the film explaining that the children working on the film were kept in the dark about the adult nature of the story. 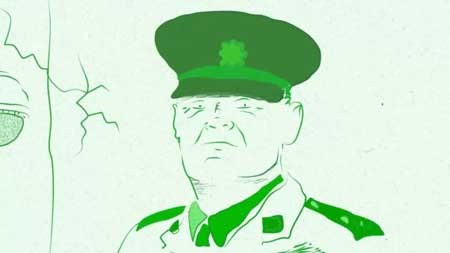 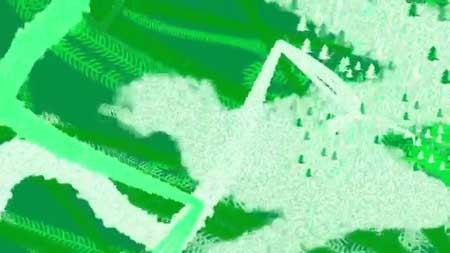 The animation is very simple, mostly eye and mouth movements, with some quite lovely backgrounds. The illustrations are quite good and in some cases very clever in the use of the limited color pallet. The child-like nature of the animation makes the film difficult to watch, but it also adds a very disturbing layer to the story overall. Nothing awful is shown on the screen, but made clear in the dialogue.

Also, there is very little music in the film. The score appears in certain segments, mainly travel seques. The score is composed by John Wright, whose band Redkid provides the music. Otherwise, most of the background sound in ambient.

So what’s the story, you ask? The film follows Noreen (Ali Coffey), an amatuer sleuth and long time Nancy Drew fan, as she rushes to the hospital where her father is in critical care after a car accident. Noreen’s father is a REAL detective who always brought Noreen along on cases, but now with his final words, he sends Noreen off on one last quest.

See, the last thing he says before he passes away is that he was murdered. He was injured in a car accident, but what if it wasn’t an accident at all? The driver who hit him is Mary Creighton (Sarah O’Donnel) and she’s in the same hospital. But when Noreen goes to talk to her, she finds a woman mumbling to herself and clearly of not much use.

Noreen asks the local police superintendant to look up Mary’s criminal history as a favor, and sets off to learn more about the woman who is responsible for her father’s death. This is a journey that starts off harmless enough, but that rabbit hole is pretty damn deep. Soon Noreen comes to realize that there are secrets within secrets in this town, and one of these secrets is black enough to have cost her father his life.

Who can she trust? Just how deep does this go? Will she find the clues she needs to solve her father’s last case before she joins him in death?

And this thing gets darker and darker. It’s like Scooby Doo and the gang actually found true evil, and are completely unprepared to deal with it. I really don’t want to give anything away, but let’s just say this is not a film to watch with the family.

Our principle characters are Noreen and her school friend Cian (Cathal O’Donnell), her erstwhile companion in the investigation. Interesting cast note – Ms. Coffey isn’t an actor. She’s a casting director, and this is her first acting credit. Same for much of the cast, actually. And like many animated films, several voices are performed by the same person.

Mr. Jones has a few other films to his credit, including a fun film called FUDGE 44, a fake documentary about bank robbing puppets in Japan. Also a type of detective story, similiar to this film, although not as dark of a story. It does take a brilliant swipe at Western journalism and our lack of real knowledge about countries other than our own.

THE GREEN MARKER SCARE may not be for everyone, and for different reasons. I can’t stress enough that the subject matter is not for children and could be disturbing to some adults. Others may just find the whole thing ridiculous and the animation style hard to watch. But I have to admit that once it got going, the film is fairly engaging.

So on a scale of one to five, five being awesome, I’m giving this film 7 green markers.