Get ready for another vampire film only this time it takes place in a post apocalyptic world. Stake Land is another bleak future vision of America where a boy named Martin watches the country collapse around him due to economic and political disasters. In the aftermath of the collapse somehow vampires rise up creating an epidemic sweeping what’s left of the nation. When Martin meets Mister, a rogue vampire hunter, it’s up to the both of them to escape north to Canada. Martin only has Mister to depend on as his own family was slaughtered by the vampires and now he must learn from Mister how to hunt and survive.

This movie has all the normal characters from a post apocalyptic world. It has your everyday survivors, militia, and of course the extreme religious fundamentalists. These are the characters that make up nearly ever post apocalyptic story except this time we also have vampires. I don’t know how I feel about that as it seems like vampires were thrown in to cash in on the recent interest in those creatures. The pictures look great though the teaser trailer is weak. Let’s give this more time but for now I think this movie might not be anything new. 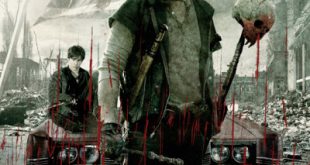 Get Ready For ‘Stake Land’ Trailer and Poster Debut