Shamrocks & Shenanigans to all of you..my acolytes. All of you who worship & praise at the altar of The Black Saint. I am just about fully recovered from the abomination called “The Last Exorcism” & I am ready to bash all of you over the head with bits of news from what the late, great Forrest J. Ackerman called “Horrorwood”. Now before I get started I just want to let you know that there is a lot of superhero news clogging up the drainpipe this week & although we worship all that is horror & terror,

I also throw in some sci-fi news just to spice things up a bit. I don’t like to say this but deep down we are all lovers of the superhero genre as well. At least I believe we are. While none of them are scary most of them are very entertaining & I feel that since there is so much news in this genre this week it should be acknowledged. And if you have a problem with it…f*ck you! The Saint writes what he writes & you read it. You don’t want me to visit you with that demon from “Last Exorcism” Abalam do you? The movie sucked but he ain’t no joke (I know him personally). We play Canasta together every so often. He’s a real sore loser too…but don’t tell him I told you that.

Wolverine 2
Hugh Jackman has dropped out of “Avon Men” to focus all of his resources on getting the sequel to last years hit off & running. The script which is complete & written by Christopher “The Usual” suspects McQuarrie is an adaptation of the storyline when Logan visits Japan & falls in love & the usual mayhem occurring because of it. There is no director attached to the film as of yet but Tony “Taking Of Pelham 123” Scott & Matt “Cloverfield” Reeves are considering the project. Filming will take place early next year.

X-men: First Class
It seems like they keep adding new actors to this f*cker every week. January “Mad Men” Jones has officially been cast as Emma Frost in “X-men: First Class to be directed by Matthew “Kick Ass” Vaughn. Emma Frost is officially known as The White Queen who’s power of telepathy earned her classic villainous status in the comic before she became one of the X-men’s most central members. In addition Bill MIlner & Morgan Lily have been cast as younger versions of Magneto & Mystique respectively. The older versions of the characters will be played by Michael Fassbender & Jennifer Lawrence for most of the film. In addition Zoe Kravitz has been cast as Angel, A young mutant with fly-like wings. This on top of the likes of James McAvoy, Caleb Landry Jones, Nicholas Hoult, Kevin Bacon, Edi Gathegi & Jason Flemyng who all are featured in this beast of a movie that starts filming in the UK very soon. 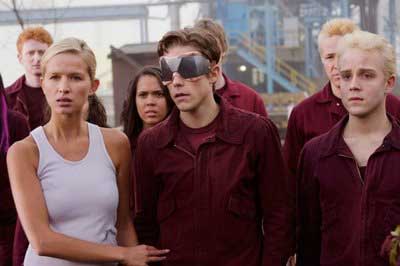 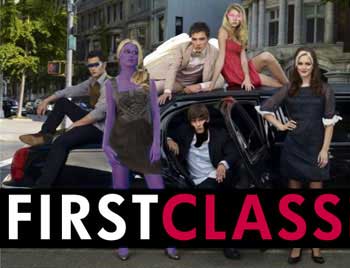 “The Avengers” in 3D?
It’s official: Marvel’s upcoming production of “The Avengers” is going to be shot in 3D & is going to be huge! Joss “Buffy” Whedon will be writing & directing the film with Mark Ruffalo replacing Edward Norton as The Hulk, Chris “Fantastic Four” Evans as Captain America, Robert “Chaplin” Downey Jr as Iron Man, Scarlett “Iron Man 2″ Johannson as The Black Widow, Chris Hemsworth as Thor & Samuel L.”Every other movie produced in Hollywood” Jackson as Nick Fury. Disney will be distributing this bad boy for Marvel in the summer of 2012. I really can’t wait for this one. I hope they do the comic justice.

“Judge Dredd”
You know, I kinda liked Stallone’s version of Judge Dredd when it was released in the 90’s. I loved the fact that I hardly understood what he said while he had the helmet on & when he took it off it was even worse! “IAMDULAWH” was what “I Am The Law” sounded like when he uttered those words. I thought it was hilarious. But it had great special effects & a pretty good storyline so I enjoyed it immensely. Well now it’s getting rebooted & Karl “Star Trek” Urban will be playing the titular character. Producers Andrew Macdonald & Allon Reich have also confirmed that they are planning the film to be a “Hard R rat ed, gritty film in which Dredd will not remove his helmet. If it ain’t coming off, why hire a talented actor like Urban? Just asking…

“Battle: Los Angeles” Vs. “Skyline”
You know every so often the geniuses at Hollywood begin production on films that are strikingly similar or even of the exact same topic or character. We’ve had killer asteroid movies produced at the same time, Biopics (Capote), Giant bug movies, etc.. The films usually just come & go & one does better than the other & life continues. But there are two films being released next year that are basically the same film & there’s a bit of conflict of interest going on at the same time. “Battle: Los Angeles” is a $100 million dollar movie about a marine platoon battling alien forces that have taken over Los Angeles & is scheduled to be released next March. “Skyline” is a $20 million production with a more “Cloverfield” type of plotline as it follows a group of friends trying to survive an alien attack in Los Angeles. The problem is that the company who produced all of the special effects for “Battle…” Hydralx is owned by the brothers Strause Who directed “Skyline”. Sony believes that the Strause brothers used the money they paid Hydralx for the special effects for their movie to produce “Skyline”. Which in their eyes would be called a “Conflict Of Interest”. I think they have a case but they shouldn’t worry because the Strause Bros. directed “Alien Vs. Predator: Requiem” & I don’t know about you but that was a piece of crap. But it is an interesting story which I will follow closely.

“Toyer”
MIA Director Brian DePalma is back in the saddle again with “Toyer” about the hunt for a “Serial Lunatic” who doesn’t rape or kill but rather psychologically tortures his victims & then puts them in medically induced comas. Shooting starts in Venice this fall.

“7 Minutes In Heaven”
J.J. Abrams is producing this Jack Bender directed film based on the old make out game that we played as teens. Most of the plot is being kept under wraps but I do know that two teens go into a closet to play the game & when they come out of the closet all of their friends waiting outside are dead. It’s a really interesting concept & right now a writer is looked for to flesh out the idea. Paramount will probably produce.

“My Soul To Take”
Wes Craven’s latest opus is opening on Oct. 8th. which will keep it away from “Paranormal Activity 2” & “Saw 3D” which is probably a good move because the trailer is online now & it isn’t very promising…& it’s in 3D as well. Which was news to me. It really sounds like “Nightmare On Elm Street”. The story is about a serial killer who was captured & executed but swore he would return to murder all the children born on the night he died. How? IDK.

“Vanishing On 7th Street”
Brad “The Machinist’ latest is a global blackout that makes countless populations to simply disappear leaving only there clothes & possessions behind. A small handful of people gather together in a dimly lit tavern on 7th street trying to combat the apocalyptic horror. It starts Hayden Christensen, Thandie Newton & John Leguizamo.

“The Thing” Teaser Poster.
I don’t know about you guys but I like this a lot: www.encoremagazine.com.au/aussie-posters-at-the-movie-convention-4143 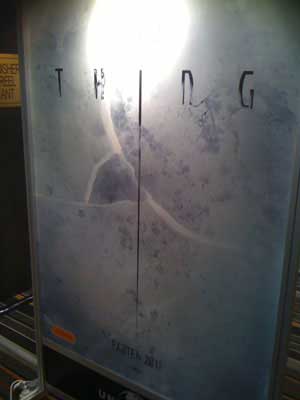 Whew!!  There is so much more I can tease you guys with but The Saint has things to do, places to go & Minions to round up. So until next time my devoted acolytes remember to always keep your elbows off the table when you’re eating dinner, separate your whites from your colors when you’re doing the laundry (this is never a problem for me…Black, remember?), & of course to always say your prayers before you go to bed. And who are you going to be praying to? Just in case you’re a new acolyte, remember to PRAY TO ME!!