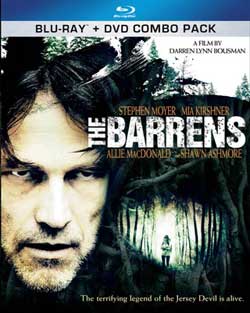 Anchor Bay Films invites viewers to revisit those campfire ghost stories that launched thousands of nightmares at summer camp with the October 9th release of The Barrens, the twisted new chiller from writer/director Darren Lynn Bousman (Saw II, Saw III, Saw IV, Mother’s Day). With a stellar genre and mainstream cast including Stephen Moyer (“True Blood,” Priest), Mia Kirshner (“The Vampire Diaries,” “The L Word,” “24”), Erik Knudsen (Scream 4, Saw II, “Continuum,” “Jericho”) and Allie MacDonald (House at the End of the Street), The Barrens arrives on Blu-ray™/DVD Combo Pack for an SRP of $29.99 and DVD for an SRP of $26.98.

Pre-book is September 12th. Audiences will also be able to experience The Barrens on the big screen, through a combination of a limited theatrical release and additional theatrical showings–available wherever fans demand them–through a partnership with Tugg.

It’s known as the Jersey Devil, the winged beast spawned 400 years ago by Satan himself. Some say this creature still inhabits the dense pine forests of southern New Jersey, where Richard Vineyard (Moyer) takes his family for a rustic weekend camping trip. As the Vineyard family ventures further into the woods in search of the perfect campsite, Richard teeters on the edge of sanity. Welcome to a new kind of horror that lives – and kills – in a place called The Barrens.

Bonus features on The Barrens Blu-ray™/DVD combo and DVD include commentary by writer/director Bousman and director of photography Joseph White; and a deleted scene.