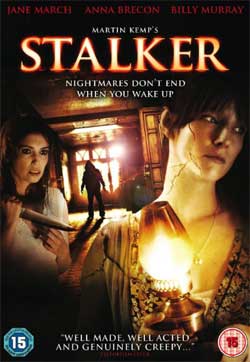 Paula is a troubled best-selling writer overcoming a mental breakdown and having trouble finishing her second novel. Taking her agent’s advice she head out to her family home in the middle of nowhere to get her thoughts together and focus on writing without being distracted. She takes an eager young personal assistant along with her unaware of the fact that she is a dangerous, homicidal nutcase who likes to kill people who get on her nerves or piss her off. It isn’t long before Paula finds out the truth about her assistant, and after getting on her bad side she realizes that she may not be alive long enough to actual do any rewrites on the novel she has been working on.

I knew pretty much nothing about Stalker before I sat down to watch it. Going simply by the title I assumed it was just another Fatal Attraction/Malicious/Swimfan-like flick where some dude screws some psycho chick and is then stalked by her when he tries to call off their relationship. It was apparent pretty quickly that I was wrong just a few minutes into when it started heading more in the direction of films more in the vein of Single White Female or The Roommate and I dreaded having to sit through yet another movie about a crazy woman who becomes obsessed with a friend/acquaintance who eventually tries to kill her so she can take over her life. Strike two, I was wrong again. It is a bit similar to Single White Female at early on but then something happens toward the halfway point that turns out to be a pretty damn decent twist that helps make Stalker stand out from the rest of the crowd.

The film itself is more of a thriller than a horror film, and in a lot of ways it reminded me of one of the suspense/thrillers that they used to show on USA Network on Wednesday nights back in the early to mid 90’s before the entire channel went to Hell in a hand basket (Tainted Blood starring Kerri Green from The Goonies is the best one, if you haven’t seen it then you need to check it out because it rules). It starts out a little too slow for my taste, but once things get going it is quite the entertaining little film and I found myself liking it more than I would have ever thought that I would have. I think that if most viewers hang in there for the first thirty very boring and slow-moving minutes or so and give it a chance like I did that they will be quite pleased by how everything turns out at the end. Trust me when I say that it is important to tough it out because the eventual payoff is worth it.

I don’t want to give anything away, but let’s just say that the big twist is nothing short of awesome. I never saw it coming and once it was revealed I was pretty impressed by the fact that the filmmakers were able to sneak something past me without me once knowing (or even suspecting) what was coming.

In my opinion not every movie needs some sort of huge twist and sometimes they just don’t work (I love High Tension up until the unnecessary twist at the end as I thought that it was very forced and it damn near ruined the entire movie for me), but it works in this instance. As a matter of fact I think that the people behind it hadn’t included the twist that Stalker would have been just your average run-of-the-mill suspense film just like countless others that didn’t have anything special going for it. My hat is off to the filmmakers for having the balls to try something different and I think that a lot of viewers will feel the same way once they find out what the twist is for themselves.

I also liked the fact that the death scenes were pretty hardcore for a suspense/thriller and most of them were horror movie quality. We get a very graphic strangulation with a piano wire that ends with a slit throat, a claw end of a hammer to someone’s eye, and multiple bloody stabbings. Paula’s assistant is a pretty violent bitch and she enjoys taking out her victims in some pretty nasty and painful ways. As a guy who loves gore of any kind I most definitely approve!

I really dug Stalker once I was able to get into it (however I absolutely hated the scene involving the cat as I don’t think that violence against ANY animal-even if it is just in a movie-is okay). I will warn you that it starts off very, very slow and the only thing that kept me from falling asleep was laughing at a certain character’s horrible toupee (you will know who I am talking about when you see it as it is pretty obvious he is wearing a rug) but it does get better. Check it out if you run across it, you could do a whole lot worse and I think that you will really dig how things play out.