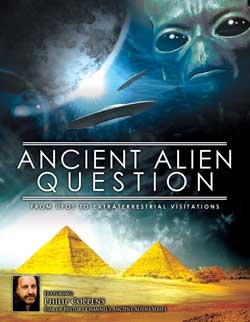 Some challenging questions for our troubling times: Have we been visited by extraterrestrial beings? Did these “Ancient Aliens” contribute to the birth of human civilization? Do our ancient monuments contain evidence of their presence?

Those questions and more are explored in the powerful new film “Ancient Alien Question: From UFOs to Extra Terrestrial Visitations,” one of the latest provocative DVD releases by cutting edge multi-media powerhouse Reality Entertainment

Join Philip Coppens, featured guest on the History Channel’s “Ancient Aliens” series as he reveals an array of astonishing truths about our history, including a radically different understanding of the pyramids and how they were constructed. Explore the origins of crystal skulls and how they were found. Learn the extraordinary stories behind monuments such as the Nazca Lines and Puma Punku, and who built them. Analyzing the latest historical and archaeological evidence, Coppens provides substantial proof that extraterrestrials came to earth millennia ago. Learn of the considerable evidence of their presence on earth, and how our ancestors were far more technologically advanced than currently accepted, and that certain cultures interacted with non-human intelligences.
Forty years after Erich von Däniken posed these questions in “Chariots of the Gods,” this feature presentation provides clear and concise answers to the great historical enigmas.

Creating works that fascinate, intrigue, scare and taunt us with invitations to enter realms and possibilities about the universe, Reality Entertainment is a world renowned producer of mind bending, cutting edge films by world class authors, researchers and experts from across the globe.  Loaded with trailers and full length features, the company’s dedicated YouTube page has millions of video views.

The Feature Documentary Film Is One of Many New Titles From Reality Entertainment, Renowned Producer of Cutting Edge Films Where “Reality Is What You Make It” And “Strange Is Normal” 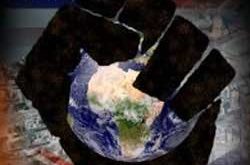