Film Review: You’re Nobody ‘Til Somebody Kills You (2012) 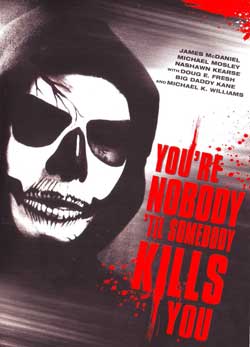 An action packed and gritty story of two New York City homicide detectives that are forced into the high-stakes world of the hip hop industry. A complex web of murder, sex, money and music unfolds as the homicide detectives track a serial killer with an appetite for some of hip hop’s biggest stars.

Before I get any further into the what’s & where’s of this review I want to note that I, The Black Saint was lived in the birthplace of hip hop…The South Bronx. I was around when Kool Herc & the Herculoids were creating something that they had no idea would become what it is now. I grew up on Grandmaster Flash & the Furious Five, The Fat Boys, Scott LaRock/KRS-One & Boogie Down Productions. I hung out at the famed “Disco Fever” club when rap was still in it’s nascent stages. I even was a semi successful DJ myself & can still spin the wheels of steel with relative skill (Arthritis has slowed me down quite a bit though). I even still own over 3000 L.P’s & 12″ singles back from the day when you needed to have 6 copies of “Apache” by the Incredible Bongo Band. I wanted to get all of this out first because I think it’s safe to say that I know my rap music very well and if I’m going to review a movie about someone targeting rappers for death that is supposedly true to the streets…then it better not only move me, it better move the crowd. 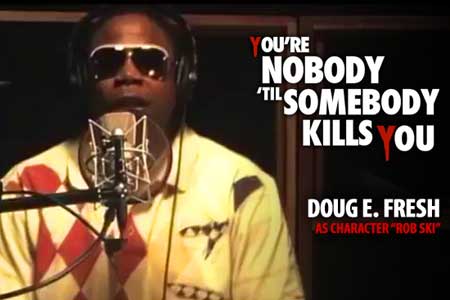 Sadly, “You’re Nobody ‘Til Somebody Kills You” isn’t that movie. Someone is killing rappers in NYC and the only clues the police have are some silly poems left on the bodies of the victims. Two detectives are assigned to solve the crime, Johnson (James McDaniel) & Francelli (Michael Mosely). The running gag in the film is that Francelli (Who is white) knows all about rap & it’s history while Johnson (Who is of course..black) knows nothing of it, doesn’t care to know anything of it and to make matters even more difficult for the investigation he’s retiring in a week! What to do, what to do…

So we get to hear Francelli explain to Johnson about “Beefs” between rappers and how the murders of Biggie & Tupac have yet to be solved while Johnson rolls his eyes at his young partner as he tries to solve the crime in a more clinical, scientific manner. The crimes themselves? The rappers are murdered with a knife (A very small knife) by someone wearing a hoodie and a skull-face mask. All involved in the investigation seem to think that up & coming rapper Manchild (Nashawn Kearse) is the next logical target for the killer although whoever is doing the killing seems to be doing their best to kill whomever they damn well please as Manchild is getting all of the attention (& protection as well). The fact that Manchild’s “Hit” single features some of the most plodding lines it’s ever been my displeasure to hear in a rap seems to be besides the point…apparently the youth of today will listen to anything. And since he never seems to get past the 3rd or 4th (Repetitious) line of his track before he’s scared away by someone or something that’s really saying something. 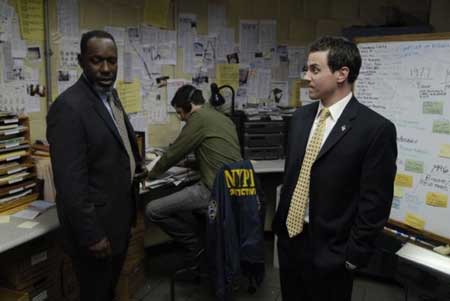 The movie just lurches from awkwardly staged setpiece to setpiece. There is no real cohesion to any of the scenes here and although the script is at best amateurish, it does have a nugget of potential deep down inside of it somewhere. Director Michael A. Pinckney also wrote the script and he seems to be trying to make a comment on the violence in rap that is prevalent today, both in it’s music & it’s creators. There is something to be said about what those who want to succeed in the music business will do to enhance their image of their “Cred” to appeal to the masses. But Pinckney misses his mark and he just can’t seem to make up his mind as to whether he’s making some kind of social commentary or if he’s making a horror film. The film might have worked a lot better if he decided which way he wanted to go because he doesn’t strike a happy medium between the two herein. What should be an energetic & gripping thriller ends up being a soap opera with a really bad soundtrack.

The actors are strictly amateur level except for McDaniel & Mosely who seem to play pretty well off of each other. Although their roles are straight out of the “Buddy Cop” genre they seem to be having fun with it and making what would’ve been the “Token” black character a white one here was a smart choice. Everyone else, and I mean EVERYONE ELSE looks like they’re either there to make a few quick bucks before going to get some pizza or someone told them that they had talent. The line readings are stale & have a “Gangsta” veneer to them that is strictly out of the “Wannabe” handbook. None of the rappers featured here are convincing and their tracks stink to high heaven. Even old school superstars like Big Daddy Kane & Doug E. Fresh come off as cloying and unoriginal…and they’re two of the all time greats! How much they got paid to appear in this film is beyond me but I hope it was worth it to them both. They deserve so much better. 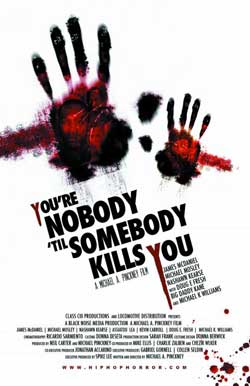 I knew who the killer was as soon as they made their first appearance in the film which is the death knell for any murder mystery. If you know who’s doing all of the (Small Knife) slicing as soon as you see them, then why watch the rest of the movie? Just FF to the end and see if you were correct. This is a big problem in a film that purports to keep you guessing but fails miserably. And why on Earth do all of these tough guy rappers go down so meekly? In my day…they would’ve went out on their shields, not mewling softly in a corner begging for their lives (Not to say that I wouldn’t be mewling. I most certainly would as I have a allergy to serial killers wielding small knives).

The worst thing about this movie is the way it’s being promoted. Spike Lee’s name is invoked all over the posters & credits but he’s just one of the executive producers, one of a few actually but his is the only bankable name in the whole production so his name is plastered all over the joint. i suspect he invested a few bucks and told the director not to mess up, jeez…I hope Spike gets his money back. If you’re at all interested in rap music and the people who make it then go out and rent “Krush Groove” or even better “Wild Style”. If you’re interested in rap music & watching the people who make it murdered then wait for another movie cuz’ this ain’t it. 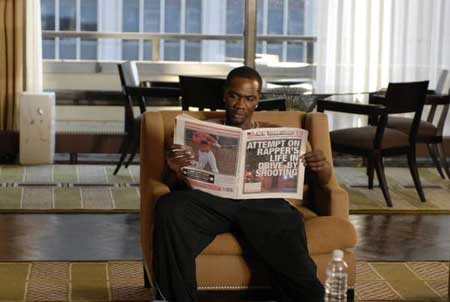 The Black Saint is bestowing one shroud out of five to “You’re Nobody ‘Til Somebody Kills You“. It could’ve been something substantial if it knew what it really wanted to be but it fails and even worse, it’s generic and boring. And could somebody tell me why in a movie about rappers & rap music there is a Techno song over the end credits? Shit, it’s not even a good one at that…