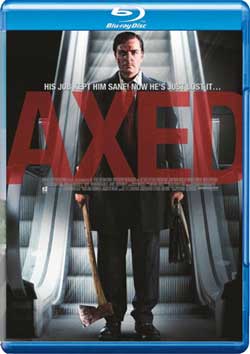 When an unlikable businessman loses his job he goes totally and completely batsh*t crazy. His solution is to take his family (who he treats like garbage) on a fun-filled trip to a secluded house in the middle of nowhere for a little rest and relaxation. Unfortunately the real reason he takes them on the trip is so he can kill them and then himself (he thinks if he only kills himself that they wouldn’t be able to make it without him). Will his wife and teenage son and daughter be able to escape with their lives or is this going to be the last family vacation any of them ever take again?

I have seen a lot of pretty lousy horror films from England in recent years, and to be honest I can name the ones that I liked on one hand (the totally awesome and underrated Thora Birch vehicle The Hole and 13Hrs come to mind immediately)while there were countless others that I didn’t care for. Axed falls somewhere in the middle and to be honest I am not exactly sure if I liked it or not. I’ll admit that it has a pretty cool premise and several things going for it, but at the same time it also has its share of serious flaws that are pretty hard to ignore. Did I enjoy watching Axed? Yes, for the most part I really did. At the same time though, I also found it to be tedious, frustrating, and more than a little ridiculous at times.

I’ll start with what works. I really did dig the premise as I thought that it was somewhat original and if nothing else the people behind it can say that they at least tried to do something a little different. I think that it is particularly relevant in this day and age where people are losing their jobs left and right due to the sh*tty economy. I know several people who have been laid off or have lost their job completely over the last several years (I went through it myself back in 2009), so I know how the main character feels when he finds out that he has been given the boot.

He may be a total prick who I couldn’t stand for most of the movie, but I could certainly relate to the freak out that he has in the parking garage after he is let go by his employer, and I think that a lot of other viewers who have been in the same situation will agree (plus he gets to beat the living sh*t out of his former boss a couple of times, and who among us have never wanted to do that?). I’ll admit that this film is a more extreme, more horror-themed version of Falling Down, but it works. I just like the fact that the dad feels that he has to kill off his entire family because they couldn’t make it without him if he just kills himself as I think it speaks volumes in regards as to how delusional and narcissistic the character is (when in reality none of his family members really care anything about him because he is such a jerk who mistreats all of them-especially his son-at every opportunity).

I’ll have to admit that the biggest problem in general with the movie was the characters. I absolutely hated Kurt and couldn’t wait for him to die. He was as about as intimidating as George Plimpton during his run as host on Mousterpiece Theater and it was hard for me to take him seriously as a deranged killer since he was just more annoying than anything. His family was equally bad, as his wife (did she really cheat on him with his boss or what?!?) did nothing but whine and mope around, his son was utterly and completely useless (who does pretty much nothing while his mother is being strangled to death with the exception of lightly swinging an axe at her attacker), and his daughter (while nice to look at) was dumber than hell (I have a hidden cell phone that I can use to call for help but I won’t use it when I need to and to prove how stupid I am I won’t even put it on silent so the person who wants to kill me knows I have a phone)and did pretty much nothing even though we are led to believe that she was a badass or something. 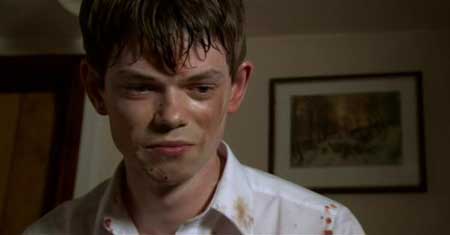 To be honest I think that the characters from this movie were probably dumber than most of the ones from the 80’s slasher flicks that take so much sh*t for doing stupid things that lead to them being killed. If I knew that my dad had lost his sh*t and that he was going to kill me and the rest of my family (especially after watching him kill someone else in front of me) I would have gotten the hell out of there as soon as possible. What do the people in this movie do? Hang around and make pretty much no effort to escape until it is too late.

Axed wasn’t terrible, but I won’t be in a big hurry to watch it again anytime soon. The stupidity of the characters (and Kurt’s annoying temper tantrums) get old very fast, and I wasn’t too upset when the film finally came to an end as there are only so many times you can basically see the same scene over and over again before you want to pull your hair out. Check it out if it sounds like something that you would be into, but keep your hopes pretty low.