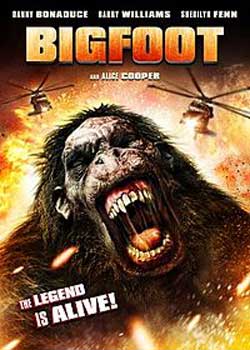 Headstrong yet prickish local DJ/concert promoter Bonaduce is putting together an 80s music festival in Deadwood, South Dakota and feels the need to destroy several acres of beautiful forest in order to build the stage and fit the “thousands” of fans he just knows are going to be in attendance. Solemn yet frumpy folk singer/treehugger Williams wants to save the forest and sing depressing songs on his acoustic guitar and the only times in the entire movie that he actually tries to crack a smile is when he’s smoothtalking his THIS close to being underage female envirogroupies. Oh, and many, many, many years ago, Bonaduce & Williams were in the same band together but broke up under a hazy cloud of suspicion. 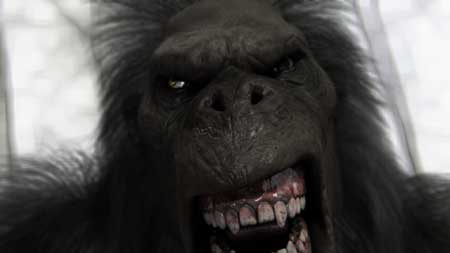 Okay to be honest, the only thing under a hazy cloud the night I watched this latest offering from The Asylum that premiered on the SyFy Channel was me, from imbibing too much rum to dull the pain of two hours I knew I would never get back.

OHHHHH sh*t, almost forgot…thar be a Bigfoot in this movie too!! But not just his foot – his whole damn body is huge. Only a few times does he shrink just a lil bit in order to fit into the scene properly. The rest of the time he’s as tall as a two story house! He’s also impervious to apparently ANY caliber of bullets AND fireproof. Oh…and, and, and, he can punt Alice Cooper through the uprights for an easy goal. Holy f*ckballs, he must be, like, THE Alpha-Squatch. A Super-Squatch, if you will, destroying the town and everyone in its path. If only the likes of Wild Bill Hickock, Seth Bullock, and Al Swearingen were still alive to save the day and the bustling town of Deadwood, this would’ve been a much better movie. Or at least in Al’s case, get the Squatch drunk and give him a special on five for the price of one hookers in his saloon. Hell, I’d buy that for a dollar any day!!

RAMBLINGS:
Somebody talk me down and somebody do it fast!! I’ve had it with my 2nd favorite movie (and/or real life…) monster getting ass-raped with a handful of sand instead of actual lube when it comes to making a quality movie about the titular creature, and then not even getting flowers or candy the next morning. Werewolves have, for the most part, been getting the shaft for years…it’s either a romance with a werewolf in the background or it’s just plain awful. The UNDERWORLD series is the only one doing it right these days, so I guess I’ll take that over nothing. 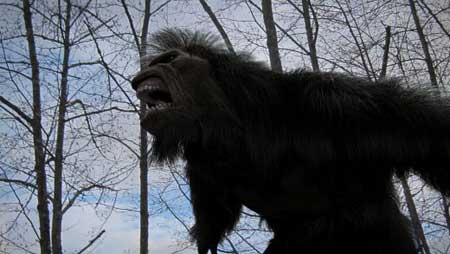 Same goes for Bigfoot (or Sasquatch, Yeti, whatever you choose) and I’ve had more than enough of this sh*t. I understand low budgets, trust me. I understand schlock…EVERYONE knows that I’m the King of Schlock. But what I don’t understand is how a network that here lately has been doing so many things right when it comes to their cheesy Saturday Night Premieres – especially creature features – can suddenly screw up so royally when it comes to dropping a couple million bucks to make it good. For that matter, f*ck good…just make it entertainingly cheesy on a level that Ro & Ally & Jen & Nic & Jackie and me and a few others in our SyFy Saturday circle can get drunk with and have a great time…not drink with to forget about the sh*t we have to suffer through, to which I ultimately wind up suffering alone through so that I can write the review accurately. Congrats, ABOMINABLE and SASQUATCH MOUNTAIN…six years later, you’re still the reigning Kings of the Bigfoot flicks.

But now, the irony has finally hit me…the two main stars in this flick hit superstardom as teenagers in the early 1970s with THE BRADY BUNCH and THE PARTRIDGE FAMILY respectively. The irony is, during the time they were singing and acting their way into the hearts and pants of millions of horny teenage girls, the Bigfoot stuff coming out around that time – LEGEND OF BOGGY CREEK, CREATURE FROM BLACK LAKE, Andre The Giant putting on a fuzzy suit for his two-part stint on THE SIX MILLION DOLLAR MAN, hell even the now cheesy as f*ck Sid & Marty Kroft produced Saturday morning series BIGFOOT & WILDBOY (yeah, I pulled THAT one out) – are all actually better AND have higher production values than BIGFOOT 2012. And if I’m puzzled by this fact, I can only imagine how you must be feeling right now. So irony can suck it…this sh*t ain’t right. Not by a long shot.

I’m still so pissed by this movie that I have to let loose a little checklist for the people responsible for this, just in case anyone decides to give the two writers of this dreck any kind of paid work again:

• If you’re going to “tribute” the same formula used by the much-superior MEGA PYTHON vs. GATOROID – so much so that you go to great lengths to have the same knockdown dragout brawl between icons of a particular genre & decade as well as rip the EXACT SAME FUCKING ENDING from said superior flick, then you’d best have some kickassingly cheesy & entertaining dialogue and scene setups to take our minds off the fact that yes, people like me know what I’m watching when I watch it, drunk or not. MPvG was cheesy classic schlock at its finest with an awesomely surprising ending. BIGFOOT was a how-to manual on how to do it all the wrong way, with the exact same ending. Shame on you for that one alone…strike one.

• I totally get that you’re environmentalists. You have to be as many, many, MANY f*cking times as you drove the point home with the dozens of scenes and who knows how many hundreds of words devoted to saving the environment with the subtlety of GWAR leading a church choir on Sunday morning. I love our environment too, but I don’t need it CRAMMED DOWN MY FUCKING THROAT IN EVERY SCENE!!!! Sweet Jesus Tits, that was 80% of the dialogue. IT’S A HORROR MOVIE NOT A GREENPEACE RECRUITMENT VIDEO!!!! That’s just lazy, preachy, and the equivalent of Mr. Van Driessen singing Lesbian Seagull over and over and over again for two hours. You can make your point without drowning us in it. If you’re NOT environmentalists though, then DOUBLE shame on you for shoving all that sh*t down our throats and being even lazier writers than I originally gave you credit for. Either way, that’s strike two… 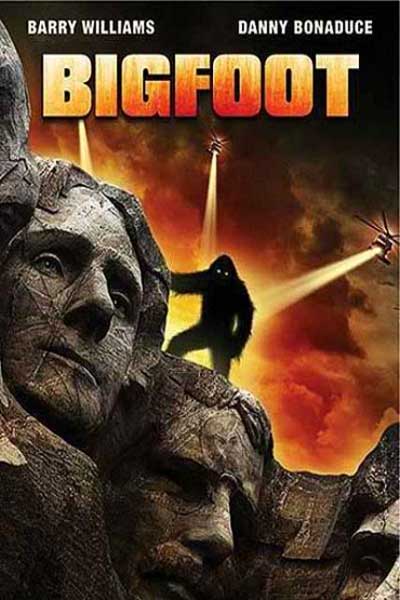 • You wound with a perfect 70s icon cast as well as a gorgeous gem from the 90s – Greg Brady, Danny Partridge, Dr. Johnny Fever, Audrey Horne, and a special appearance by Alice Cooper, all in the same movie…HOW COULD YOU FUCK THAT UP????? Horrible, horrible, SUCKTASTIC dialogue with hardly a tribute one to any of those iconic characters that could have totally been poking fun at themselves for their amusement AND ours. Looks like that’s the one thing from MPvG that you DIDN’T rip off that you actually should have paid attention to and maybe thrown a little more of into your own “script”. And that’s strike three…you’re f*cking outta here!!!!

And so am I…still have a few drying chunks of nacho cheese left to clean off my TV from this sh*tfest.