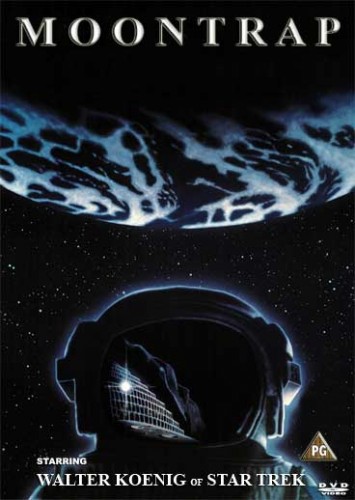 “During a routine flight, two veteran space shuttle pilots discover an alien artifact and bring it back to earth. It soon turns out to be an extraterrestrial war robot, which is able to recycle any biological or technical material for its own deadly use. The two astronauts are sent to the moon where NASA expects to uncover the mystery of the alien robot’s origin. They discover an ancient humanoid culture and battle the ultimate threat of the war machines heading for earth.” (courtesy IMDB)

If ever there was a movie of which it could be said “If you’ve seen one, you’ve seen them all,” Moontrap (1989) is it, with more visual references to previous science fiction films than Terminator Salvation (2009). In the first thirty seconds following Moontrap’s main titles, we get references to the opening music of 2001: A Space Odyssey (1968), the opening shot of Star Wars: A New Hope (1977), and the opening narration from Star Trek. It’s just too bad that hero Colonel Jason ‘Einstein’ Grant, played by Walter Koenig, never saw Alien (1979), because if he had he would have known that guys in spacesuits shouldn’t mess around with organic-looking pods they find in derelict spacecraft. 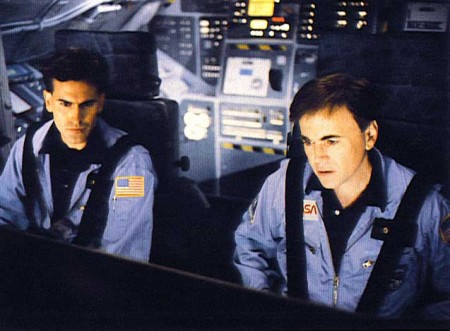 With his co-pilot Ray ‘The Penetrator’ Tanner played by cult star Bruce Campbell, they are a pair of over-the-hill jet jockeys flying the space shuttle Camelot on a satellite repair mission, when they discover an alien spacecraft. Somehow ground stations didn’t notice a quarter-mile long object heading for Earth. On investigating, they unleash a giant killer robot which later creates havoc on Earth and leads them to seek its origin on the moon. There the explorers discover a prehistoric moon-base, apparently built by humans fourteen thousand years ago. The base is littered with human skeletons, miraculously still articulated (yes, I’m amongst them – keep an eye out for my tattoo), and Mera (Leigh Lombardi), a cryogenically frozen young lady who gets to be menaced, to scream, and to take off her shirt. 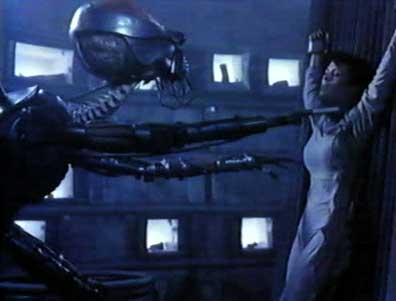 Our heroes survive an attack by another killer robot by blowing it to pieces with their guns, which apparently don’t have any recoil. With their Lunar Excursion Module stolen and facing continued attacks, Colonel Jason knows what to do: He pops up a moon-tent and promptly shags the girl! 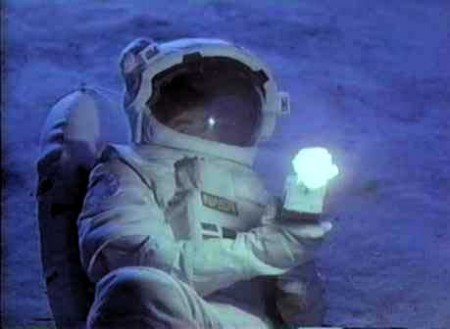 Mera and Jason get captured and taken aboard the robot’s spaceship, heading to Earth. Jason discovers that their missing LEM has been incorporated into the alien ship. “It’s the lander,” Jason states for the benefit of audience members who have their eyes closed, “The last piece of gear needed to complete their ship, and they waited fourteen thousand years for us to bring it!” Good thing for the robots that NASA used that particular design, or the wait might have been for nothing. 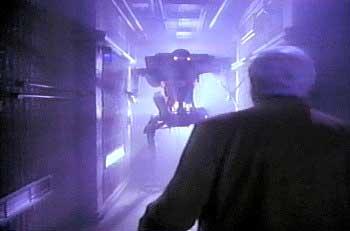 Jason sets the Self-Destruct on the LEM – a surprise NASA refinement – and makes his getaway. He fires a burst from his weapon, and this time it has recoil. This newfound recoil blows him and Mera right out of the conveniently located opening in the hull and on to the space shuttle Intrepid which, happily, is nearby. The Laws Of Improbability have triumphed again! 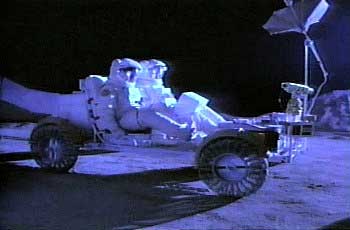 But there’s still time for one more cliche before the final credits roll. One of the robots has made it to earth, opening up the possibility of a sequel, or maybe even a television series, overly optimistic wishful thinking on the part of the film-makers. Despite all of this, the film’s effects and sets are quite nice, Bruce Campbell is always a joy to behold, and Walter Koenig definitely has screen presence – as proven by his chilling performance years later in Babylon Five – especially without his ridiculous Star Trek accent, though action-adventure may not be his first best vocation. 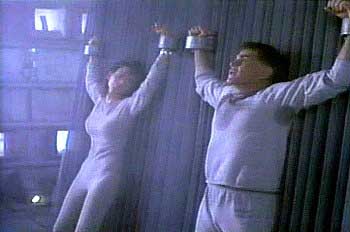 Having demonstrated to you the perils of probing the dark depths of Hollywood, I’ll vanish into the night, after first inviting you to rendezvous with me at the same time next week when I’ll discuss another dubious treasure for…Horror News! Toodles! 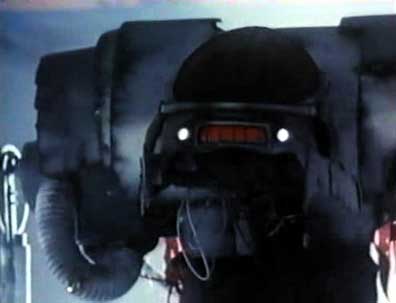