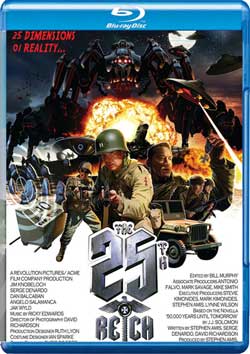 In 1943, five US soldiers are recruited by the OSS for a time travel mission to save the world from the tyranny of Hitler’s 25th Reich.

Director/Writer Stephen Amis is someone I just have to meet. After seeing “The 25th Reich” I just wanna be able to pick this man’s brain and figure out what he was thinking while he was making this movie because it had the potential to be a gloriously delirious mash up of genres the likes of which have never been seen. But budgetary constraints stop it from reaching the heights that it’s shooting for although Amis doesn’t let that stop him from trying to make his movie the way he wanted to. He comes close though…really close. 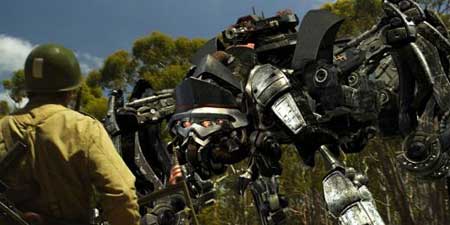 The film takes place in the year 1943 during the second world war. We’re told that as Hitler is pounding the allies in Europe, American troops are forced to retreat from the advancing Japanese to the relative safety of Australia. General Macarthur has commissioned a pair of black pumas to act as “Ceremonial Mascots” of the newly arrived American infantry but after an accident in transport the pumas escaped and disappeared into the bush. General Macarthur then dispatches a small squad of soldiers to track down the animals and bring them back, dead or alive. Led by Sargeant Carl Weaver (Serge De Nardo) the squadron of five drives off into the high mountain wilderness where the pumas were last seen. But what is the real reason they’re on this mission? Is the capture of two pumas that important in the middle of a war?

We’re introduced to the five men assigned to the mission as they are driving into the bush. They fit right into the classic stereotypical roles you might expect of any war film. In addition to Weaver there is Captain Donald O’Brien (Jim Knobeloch) who, before he was drafted, was an actor of some renown. Corporal Haywood Updike (Jak Wyld) who’s a typical southern boy with an itchy trigger finger, Rifleman Roberto Barelli (Angelo Salamanca) a big hearted Italian who hails from Brooklyn & Private Eli Ishback (Dan Balcaban) who’s overwhelmed by being in the same squadron with O’Brien. Not much mention is made of the large device that’s attached to their jeep on a trailer but Sargeant Weaver looks at it nervously every time they hit a bump in the road. The others think it’s a radio receiver but Weaver knows what it really is and he ain’t telling.

The radio receiver is actually a time machine & what it’s going to be used for is way too convoluted for me to explain in a few paragraphs but our heroes do go back in time & after an attack by some prehistoric mosquitos and the discovery of something that really shouldn’t be there they travel forward into the future to find that Hitler and the Nazi’s have not only won the war and subjugated the planet but have much bigger plans for the entire universe. Did I just write that? What the hell am I talking about here? Well I’m not stuttering here acolytes, this movie is really nucking futs..

Based on a novella called “50,000 years to Tomorrow” by JJ Solomon, “The 25th Reich” has big ideas propelling it forward but not enough of a budget to get those propellers spinning. The entire film takes place in the Australian bush so there is absolutely no change in what the present, past and future look like which was a smart if obvious choice for a place to film the movie in. The special effects are either purposely cheesy or just the best that the production could squeeze out of it’s meager budget, I’m not quite sure which though. The major effects don’t arrive until the last 15 minutes of the film anyway & they are fun to look at despite their failure to convince.

The bulk of the film consists of the five men arguing with each other. there are the usual secrets that a few of them harbor to themselves that come out later but it does become something of a slog as I waited for something to happen. Luckily the actors did a pretty decent job of keeping me entertained as I listened to them try to maintain their fake accents. Best performance comes from Knobeloch who underplays his role just right, especially with what his character experiences towards the end of the film. Which leads me to….

The very obvious homoerotic subtext that runs throughout the entire film! I’m not sure if the novella was written with this in mind but this movie is rife with phallic symbols, imagery, dialog and towards the end poor Captain O’Brien is the recipient of an attack that actually made my jaw hit the floor. I have never seen a film that even attempted to pull off a scene like this one let alone succeed in doing it but I guarantee you that once seen it will never be forgotten. It is one for the ages…

At the climax we’re treated to giant mechanical Nazi spiders (complete with Nazi helmets) that are in no mood to be trifled with and a pretty exciting cliffhanger with the promise of a sequel titled “The 25th Reich and the War With God”! And they literally mean God, as in Jesus Christ and all that. Apparently he’s waiting for them in the 25th dimension and they’re on the way. Again….what the f*ck did I just write there? There are some great opening & closing credits here & the rousing (If familiar sounding) score by Ricky Edwards gets the blood circulating but ultimately the film fails because it tries too hard to be bigger than it is and that led to it feeling very ordinary & small. The middle third will absolutely kill you if you’re not into it at that point but hang in there for the aforementioned “Jaw Dropper” scene. You’ll be amazed, repulsed, amused or a mad combination of the three but you won’t forget it.

“The 25th Reich” rates two out of five shrouds for me. I really wanted to like it more than I did and it does have potential but it just didn’t have enough of a budget to make it work. Hopefully, if the promised sequel gets made it will warrant a bigger budget as that title promises something really, really big and exciting. I mean…Nazi’s Vs. God in the 25th dimension? How much bigger can you get I ask? 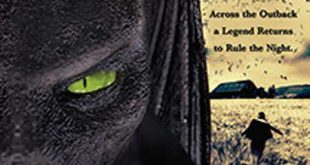