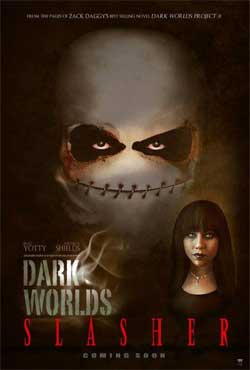 William Rosum is a bit of a celebrity. He’s in the papers all the time. He’s the talk of the town Everyone is dying to know where he’ll be, what he’ll do and most of all – who he’ll kill. After 55 slayings in 5 years, William has earned a reputation as the Careview Slasher, but as he will soon learn, sometimes the price of fame can be deadly.

Last week I was surprised to find a message in my inbox from Michelle Shields. For those of you who don’t know her, she is an indie film actress who has appeared in films like “Frankenstein: Day of the Beast” and “Sister Mary”. She basically sent me an invitation to view the new short film she is part of called “Dark Worlds: Slasher”. How could I turn it down? The project is based on the novel “Dark Worlds: Project 31” written by Zack Daggy who also had his hand in writing the shorts script with Allen Sale. Spearheaded by Darkrider Studios and directed by Chris Jay (“Lethal Obsession” and the upcoming “Mother’s Blood”), “Slasher” is the first installment in what is being planned as an anthology. So, is it worth your precious twenty minutes? The answer is simple: HELL YEAH!!!

William Rosum (Beau Yotty) has earned himself a reputation in the media. People know his work and they are following it closely. The call him the Careview Slasher and his job is murder. The body count is rising with no apparent end in sight. He loves the thrill of the hunt but things have been a bit stale lately and his victims have not been very challenging. When he sees his Snow White Allison (Michelle Shields), he feels things will be different with her. He just has no idea HOW different they will be.

“Dark Worlds: Slasher” is a perfect example of why short films still matter. It’s short, slick, entertaining, and leaves you salivating for more. Everything in the production is top notch. The acting, production design, and a killer soundtrack, can’t ask for much more. It was light in the gore department but that isn’t a necessity since the story takes precedence and it is a damn fine one. I’m not always a voice over fan but here it works terrific since we get to hear what is on the killer’s mind while he is hunting down his victim. A very unique idea and it works terrific in the short. Director Jay does a great job of moving the pace along quickly while still allowing us to become invested and/or interested in our lead character. The film takes itself seriously while allowing a thread of dark humor to weave its way throughout. Both lead actors give us a sense of who these characters are and the Careview Killer mask is creepy enough to give some a few nightmares.

Since this is so short I won’t drag this on any longer than it needs to be for fear of giving away too much of the story. I have no idea what the release plans are for the film but it will be well worth your time to seek it out when it does. Great stuff ***** (out of 5)!!