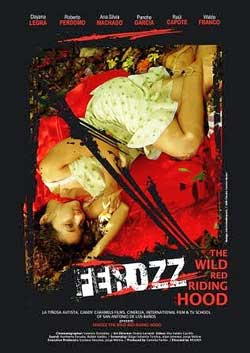 A young, attractive widow is protected from her vicious mother-in-law, by a male relative who practices Satanism, and lusts after the old woman’s sexy adolescent granddaughter.

“Molina’s Ferozz” is a Spanish 2010 film directed by Cuban director Jorge Molina. Its title was changed to “Ferozz: The Wild Red Riding Hood”, though I’m not so sure there was really much in this film that resembled the old fairy tale of influence. It was clear after about the halfway point, that this film was intended to be an odd entry built around extreme circumstances. Though I do have to say up front that the film seemed to be on the most part pointless and bizarre. I was most reminded of director Lars von Trier style of who’s audiences might find some appeal.

We are immediately introduced to a poor family under constant ridicule and verbal abuse by the absolutely grotesquely-homely-looking alcoholic mother-in-law Zuma (Francisco García). To bring all the relationship details into clarity, we have Zuma’s son Lucio (Waldo Franco), his wife Dolores and her daughter Miranda (Dayana Legrá). Dully, their mentally off beat Christ looking boy is actually Zuma AND Lucio’s son (Lucio raped his mother of which Zuma gave birth to Dully, son AND also brother to Lucio) 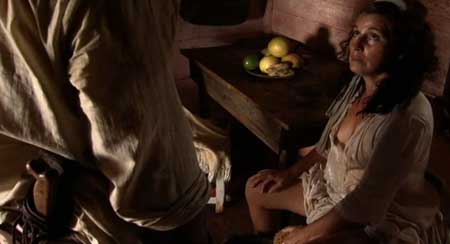 Now all these details are sort of thrown at us pretty quick but in short its quite a dysfunctional family which revolves around inbreeding and eccentric behaviors. Dolores has a crush on Inocencio, Lucio’s older brother, who works out in the fields. Zuma though seems to pry way too much bringing more drama to the family than needed.

When Zuma orders her son Lucio to rape Dolores at the dinner table, Lucio falls over dead (right after) leaving Dolores as a single widow. Zuma, owner of most of the land, wants to evict the family as a result but gets caught in a messy legal battle. In short the details don’t make much difference except that Zuma grows ill to the delight of the family (and is bed-ridden).

As the story moves forward on these gray details, we begin to dive into more of the family’s bizarre customs and culture. Dully spends most of his time whacking-off to the local women as they bathe, while young Miranda seems to be coming of age sexually herself (In one scene she washes her thighs down in front to visiting Inocencio). In another naked Miranda flirts with Inocencio who brings her clothes to her. 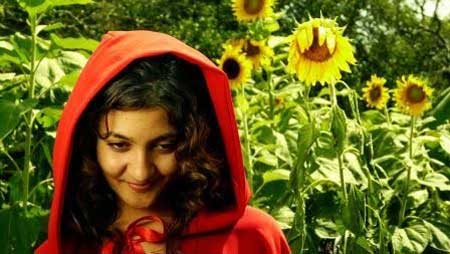 We also find out about a creature they call “Cagueiro’” which is told in the same sense as a mythical urban legend might. This creature will later fill in “some” of the film’s gray lines.

Inocencio is revealed as a practicing Satanist (of sorts) who has a crush of Delores daughter Miranda. I began to lose track at how many politically incorrect taboos were introduced into his film, but much of it was rather racy and isolated to a family whose normal comfort level went way off the deep end. (I will throw in the comment that there is a rather shocking moment involving a small puppy).

If you plan on seeing the movie you may not want to read the upcoming spoiler, but the film does escalate a bit with some heavier scenes.

Miranda is obviously the symbol of Red Riding Hood in this film (as she dons a red hood), however I’m not entirely sure “who” the big bad wolf (or how it was woven in) Perhaps it was the mother-in-law, the “Cagueiro” or even the uncle himself? In any case, in the 3rd act Inocencio loses it and ends up hacking into the old annoying Zuma leaving her guts splattered across her chest. Then when Inocencio hacks off Dully’s head, he is discovered by the visiting Miranda. As a final blow Inocencio rapes Miranda only to have her respond in a positive way by accommodating Inocencio even further. The 2 of them make love on top of Miranda’s dead grand-mothers corpse. ….nice eh? 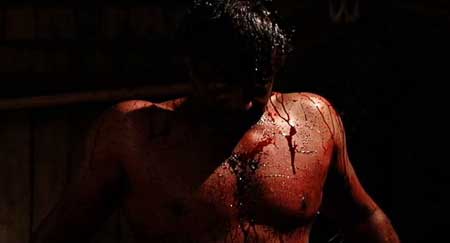 The film “Molina’s Ferozz” is bizarre in that its agenda is quite surreal at times. It’s not quite a fairly tale, it’s not quite a horror movie, it’s not quite a rape film and its not entirely an exploitation picture. Though it does use all of those elements to its portrayal. At the end when trying to categorize it, it felt like its intention was more of a obscure dark comedy based on a twisted version “of” a fairytale.

“Molina’s Ferozz” is intended for more exploitation-suited audiences. While it is too extreme for young viewers, it also caters more to an art-house crowd who likes their films off the beaten path. At times it can be highly sexually while others just disturbing. I wouldn’t say it ever goes into the direction of the more violent extreme films but does so in its own way of presenting things. Maybe worth a viewing once……….. and left at that.