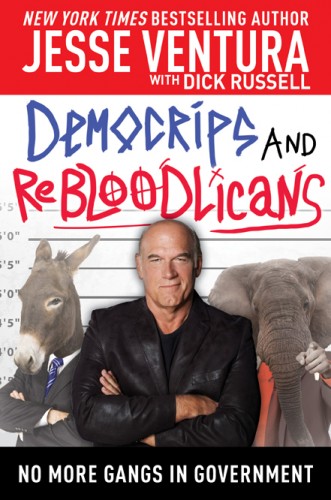 Due to schedule problems my interview with Jesse “The Body” Ventura on Tuesday didn’t take place, but Jesse’s people asked me to re-post this interview from Monday, June 11th by Forbes Magazine.

Jesse Ventura: [chuckles, signature Jesse] It’s a hard one to miss. Good to talk with you today, Ken.

KR: This morning on The Takeaway, Joseph Stiglitz was talking about income inequality and the growing inequality of opportunity in the U.S. You’re a Vietnam vet. Are we more divided now than we were then, at least politically speaking?

JV: We were more divided then. The true turning point as a nation was when the National Guard shot four students dead at Kent State. We’re divided, but they haven’t shot anybody since.

KR: Would you send your kids to war today?

JV: I’d be a conscientious objector. You’re going to war for corporations, not for people. Smedley Butler, a general in the Marine Corp., said that about our interventions in Central America. It’s a very well known critique about U.S. wars.

KR: I’ve heard it many times. But there’s a different kind of division now, not just politically right and left. We’re seeing a class division creep in. The rich really are getting richer — way richer in fact — and the middle class are definitely getting poorer. I was surprised to see, but you write a lot about that in your book. You’re a one percenter. What’s it all look like to you in Minnesota?

KR: I don’t know. You tell me. You were the governor.
JV: Not anymore. And I don’t miss it one bit. That’s all policy decisions at the state level. I gave taxes back when I was governor. They can’t even balance their budget and its state law to do so. You know where our taxes go?

JV: Well, a lot of it went to bailout out banks and the rich. During the last Great Recession or whatever you want to call it, I’ll have to quote the Wall Street protesters, the 99 percent lost money. But the rich made money. They got wealthier thanks to policies that helped them get wealthier. They didn’t get wealthier because they are smart investors.

KR: You’re right about that. Even Citi says so.

JV: You want to hear something funny about taxes?

KR: Is that a joke, like a Polish man walks into a bar?

JV: No. But it’s laughable. I’m learning to paddleboard. In Minnesota you need to get a license to paddleboard because the board is over nine feet long. So you have to pay a fee. And you have to wear a life jacket.

KR: Please tell me Jesse “The Body” isn’t wearing a life jacket on a paddle board.

JV: If I showed up with a life jacket to protect me from the wake of a boat that’s maybe a foot high I’d be laughed out of the lake. This is the stuff politicians can agree on. These are the kinds of policies we the people get.

KR: They must have hated you in Minnesota. An independent who doesn’t have to raise money because getting publicity for you isn’t a problem.

JV: I’m one of the few people who actually made money as governor. I spent less money to get elected than I earned. Everyone else pays a million dollars to get paid a hundred and twenty grand. When I was governor, I was up against both parties and they vetoed me all the time. On that front they were united. They vetoed my balanced budget because they thought it would make my re-election bid less likely for the voters so they could turn to one of the two gangs again. But I didn’t run. That surprised them. And now they have around a $5 billion deficit, worse than Wisconsin.

KR: What do you think about [Wisc. governor] Scott Walker?

JV: I think he beat [Tom] Barrett because he had more money. Whoever gets the most bribe many can put the ads on TV. And now with Citizens United and SuperPACs unleashed, these groups can lie about their favorite candidate and the politician isn’t held responsible for the content. I think every politician should wear a NASCAR race suit at this point.

JV: You know how the NASCAR race suits all have the ads stitched on them from the driver’s sponsors? Politicians should wear that too so we can see who owns them. It’s laughable what we have turned our elections into today, where bribery is okay. We should only put candidates names on the ballot without their party affiliation so people will have to actually know the candidate. They make it too easy today. You don’t have to know the candidate’s name. You just go in and vote for a party.

KR: What do you think of Karl Rove? Guy’s like the king of secret funding operations.

JV: I think he’s a chicken hawk. He leads from the rear, not from the front. Likes to send kids to war. Know how to tell if a war is justified? If you’re willing to send your kids to fight it. If you’re only willing to send someone else’s it’s not justified. I’m 60 years old now and we have been at war somewhere half of my adult life, and I’m not even including the war on drugs.

KR: Should we legalize drugs?

JV: Yes. The Beatles wrote the greatest album in history [Sgt. Peppers Lonely Hearts Club Band] high on LSD. Anna Nicole Smith died by overdosing on prescription drugs from big pharmaceutical companies. I’m not saying you legalize crack. Why not legalize marijuana. You can make biodiesel from it, and start using corn for food instead of ethanol.

KR: I was impressed with all your foot notes in the book. How long did it take you to write this thing?

JV: Four months in Mexico. I have a house down there in Baja. It’s where I can concentrate. No TV. Totally off the grid. I’m solar powered.

KR: Wow! I didn’t know that Jesse “The Body” was a pot smoking latte liberal. You probably drive a Prius.

JV: No, I drive a twin turbo Porsche 450 horse power all wheel drive six speed. I don’t even have a cell phone because when you’re driving that thing you want to concentrate on the ride.

KR: Okay. What about this: Tea Party or Occupy Wall Street?

JV: Tea Party is owned by the Koch brothers. The grassroots supporters of the Tea Party will never get what they want, unless they think lower corporate taxes and oligarchy are the answers to their prayers. Occupy is still marginally independent. I attended a Minnesota Occupy rally five different times. I handed out hand warmers. At the time, we were cheering on the Arab Spring protesters and pepper spraying our own protesters at home. Park ordinance didn’t allow them to even have generators at night to keep them warm. But there was one generator that was allowed to run, and that was the one that was powering the surveillance camera that was keeping an eye on them.

KR: Occupy seems to be weakening. They don’t have the monied interests behind them. Is the Tea Party relevant anymore?

JV: I think they are still relevant. They got a lot of people elected, but they are not the answer.[For the answers, go buy his book.]

JV: None. People ask me to run again. I’d rather be surfing in Mexico for four to five months a year.

KR: That sounds much better. I think every ex-President would agree with that. Let’s change the subject. What happened with “Conspiracy Theory”? [Jesse’s show on TruTV.]
JV: Finished eight episodes in November but it ain’t on. No start date. It’s still sitting there in production at TruTV. I’ll be surprised if they even put them on. This would have been our third season.

KR: Is there a conspiracy against Jesse Ventura?
JV: I don’t know. 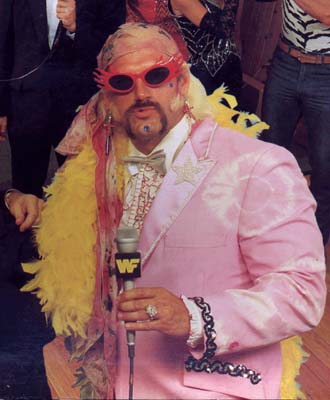 KR: I have to say that if someone ever told me at 15 that I would one day be talking to Jesse “The Body” Ventura, I wouldn’t believe it. Wrestlemania was a show!

KR: [starts to crack up with childhood memories] I remember one Wrestlemania, you’re on the floor giving play by play with Bobby “the Brain” Heenon and there’s “Hacksaw” Jim Duggan with his two-by-four in the air, his tongue hanging out, looking like a mess [Jesse starts to remember, starts to laugh] and you’re like, ‘Look at that guy, just look at that snot hanging out of his nose.’ The way you emphasized the word ‘snot’. It was hilarious to every teenage and tweenage boy in America. Me and my brother are still talking about it and we’re in our thirties.

JV: Vince McMahon [the brains behind the World Wrestling Federation, as if any reader didn’t know that] was the P.T. Barnum of the century. Hey, one time I went back stage and was telling Koko B. Ware the stuff I was going to say about him during the show. I did that all the time so the wrestlers wouldn’t get upset. We were all friends, ya know. So I say on the air that the B in his name stood for Buckwheat, because he was Buckwheat’s grandson. And I got in trouble for that. That was the first time I was really ever censored for saying something like that and ironically, Eddie Murphy was doing his Buckwheat character on Saturday Night Live and Buckwheat was on the earliest show to ever showcase a racially diverse neighborhood, but it came from a white guy so it was banned and I was scolded for it.

JV: I hope Americans learn. I’ve been telling them this about their government for the past 10 years.

KR: You’re not alone. I think it’s clicking in now.

And here’s the full interview:
www.forbes.com/sites/kenrapoza/2012/06/13/jesse-the-mind-ventura-on-politics-porsches-and-paddleboards/