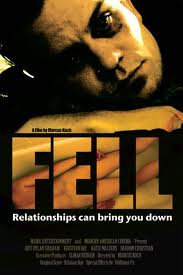 Bill has problems. He lost his job, he quit the band, his medications are running out, and his relationship with his ex-girlfriend, Jenny, has gone down the drain. But now he has an even bigger problem, there is a dead girl in his bathtub, and he can’t remember how she got there. Bill’s best friend, Derrek, is the only person he feels he can trust. Together they need to figure out who she was and what to do with her decomposing body. Relationships can bring you down.

“Fell” “movie that I had planned on not liking. I try going into a film with a clear head and open mind even though a part of me was speaking out, saying “This is gonna suck!!” It isn’t something I do consciously but it’s this little voice in my head. It sounds a little psychotic, I know, but this may be partly why I was so surprised that I like the film. This is a slow, slow film. The pacing creeps along so slow that it almost lost me a few times. Thankfully, I was able to hang in there and it turns out that “Fell” is a solid portrait into a man’s mind who is slowly losing his grip on reality. One of the main reasons I was drawn into the film was due to the portrayal of the films’ lead character Bill by actor Jeff Dylan Graham. I had previously seen him in the hilarious horror spoof “Bloody Bloody Bible Camp”. Here he is incredibly believable as a man suffering from depression and confused by the dead body in his bathtub that he can’t remember how it ended up there.

Bill (Jeff Dylan Graham) is having a rough time. He is out of work, quit his band, off his meds, his girlfriend Jenny (Katie Walters) has left him, and now there is a dead body in his bathtub. He doesn’t know how it ended up there nor does he want to go near it. Instead he tries to ignore the fact that it’s there. His depression is at a high and all he wants to do is just sleep. He tries to talk with his Psychiatrist (Barron Christian) which helps a little, but he really confides in his best friend Derrik (Kristian Day) who is almost devoted to a fault. Derrik is always there for Bill when he needs him. Bill tells Derrik about the body. Together they are going to try to figure out what happened and how it got there.

The pacing of the film is so weird. Even though it almost lost me a few times, I don’t think the film would have had the same effect otherwise. With Bill’s depression and break from reality, the pacing and repetitiveness of his day is almost heartbreaking. Bill is alone, depressed, and confused, trying to call Jenny. She isn’t answering so he keeps calling her over and over again. This goes on for almost ten minutes of screen time. Director Marcus Koch made a bold move by doing things like this and while it does grate on you, it works in the scope of the bigger picture as we learn the why. The film is mostly set in Bill’s mess of an apartment, though there are a couple of flashbacks to a time when Bill was on top of the world. We see both sides of his personality and you just can’t help but to sympathize with him. Graham does an outstanding job and is incredibly believable.

It was interesting to see that the cast was also responsible for the script. I’m sure they all contributed parts of themselves to the characters that they played, adding an extra bit of realism to it. I could see the events in this film happening in real life and I am sure that at some point, somewhere, it has.

“Fell” isn’t a film to buy, not much replay value, but well worth a rental. Don’t expect some sort of blood soaked spectacle, this is meant to be a psychological drama and it works really well on that level. It was eerie to me that Jeff Dylan Graham reminded me so much of a friend who passed away several years ago with his mannerisms, the way he spoke, as well as carried himself. So I may have been a bit more invested than I normally would. Still a solid film and I’m giving it **** (out of 5). 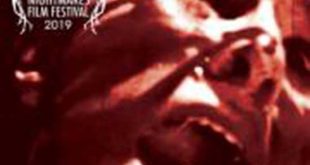