Deborah is a model and actress with mix of races from Spain and Belgium. She speak in English and Spanish. Her unique International look and bi-language let her work for the American and Latino American market. Since she moved from her country Argentina to Miami the talent agencies were knocking on her door, her image as commercial model was everywhere…many magazines,postcards,posters,souvenirs,calendars and art gallery. She was also in Play Boy TV, MTV Commercial and many TV Shows, a variety of videos as an actress,model and performer.

In 2012 Deborah will play lead actress at ” Jebadiah’s Axe” horror film that will be shoot this year in Dallas,TX. When she graduated from the University of Advertising, Deborah produced couple of videos and TV commercials, but her passion for acting will lead her to produce her own movies she said: “I will finish my book that will become the script of my own feature film”. 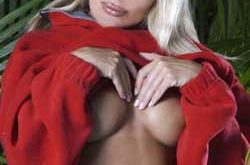