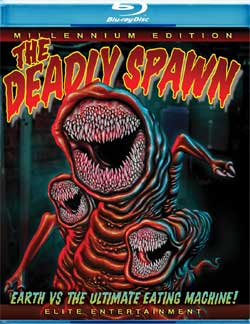 Alien creatures invade a small town and a group of four teenagers, plus one little boy, try to escape from them.

There was a time not long ago when English film censors viewed bloody scenes with intrepidation and would stringently rate them accordingly, usually giving the film an 18+ rating, meaning that it was only appropriate for 18 years old and above. While intentions may have been good, most of these films and their ratings are now quite laughable when considering today’s standards and ratings system. However, one thing is for sure, when a viewer sees that initial censorship screen, they can be certain that gore (even if it is a bit cheesy) is on the horizon. The Deadly Spawn is one of those films, incorporating splatters and widening blood puddles throughout, along with some fantastic little squirmy creatures. 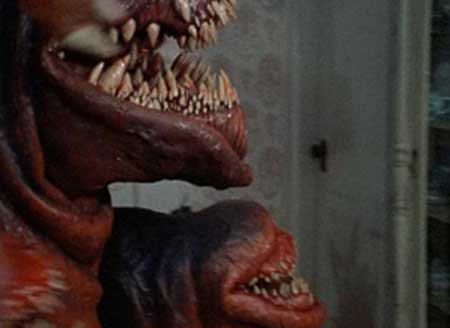 The film begins when two campers see something fall out of the sky. Upon further investigation, the object appears to be a meteor. During a quick discussion about one of the campers going back to fetch the camera, the so called meteor moves and it soon becomes clear through screams and splatter that this is not your typical inanimate space visitor.

The following morning, a couple living nearby are arising and realizing that the prior evening provided a massive rainstorm. The man of the house goes out onto the porch to collect the morning paper and doesn’t notice that a basement window is partially open (oh no, the creature is in the house). However, the storm has knocked out the home’s hot water heater, requiring him to trek down there to fix it (here it comes, the film’s first fatality). 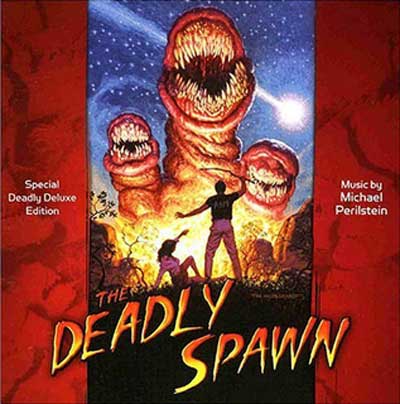 He steps off the bottom step into the four inches or so water in the flooded basement and immediately feels something just isn’t right. His destination is located in a darkened back room and with obvious hesitance, he goes to it and is attacked by a creature with more teeth than able to count, hell bent on a snack.

The woman, unaware of the basement happenings, is busy getting ready for a trip the two had planned for the day and when the man fails to return, she investigates, becoming dessert for the creature. 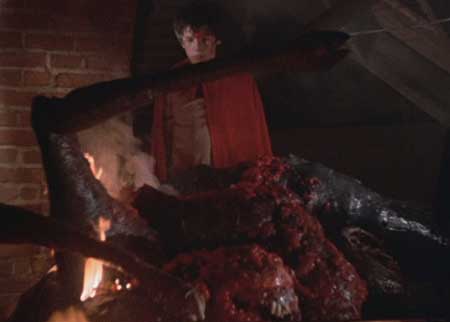 Three house guests, relatives, dad, mom and son, who have come to visit, arise from their slumbers and enter the home’s kitchen to find a previously written note explaining the home owners planned trip and automatically assume that they have already gone. As the family busies themselves creating breakfast, they realize that the hot water is on the brink and an electrician is summoned. The electrician comes and enters the basement only to find blood puddles and splatters and soon becomes a statistic.

The boy, a connoisseur of fear, often found watching horror films or utilizing his latest gruesome mask to scare someone, hears strange noises in the walls but basically ignores them assuming it is the electrician fumbling with the hot water tank. However, he decides to don his mask and goes to the basement to try and scare the electrician. 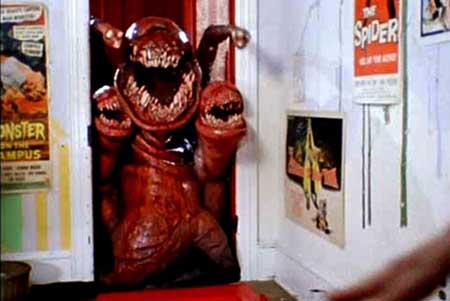 The basement is dark and shadowy, just as a typical horror movie should be, and the boy, harboring a flashlight which he uses to shine vertically from below onto his mask for added fright effect, sneaks about seeking the electrician. He enters the back room and finds both the creature, as well as what is left of the electrician…his head. Not entirely frightening by no means. But, what does offer the creeps is the creature’s offspring, resembling large tadpoles with vicious teeth and a terrible hunger, swimming about in the few inches of water remaining on the basement floor, slithering on the piping, through the house, and basically everywhere, including nibbling on the electrician’s face. Rooted in fear, the boy watches from a short distance and realizes, by tossing an object to the other side of the room, that the creature and its spawn are blind and as long as he doesn’t make a sound, they can’t find and harm him. 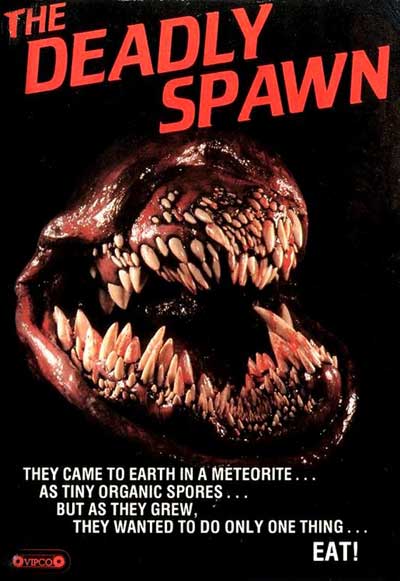 Meanwhile, three biology students are discussing their latest storm drain find, one of the creature’s babies, and decide to dissect. Noticing that it is like nothing they have seen before, the discussion turns toward what it could be and a reference to outer space is considered, eventually leading to the creature being found out and destroyed. But, did they get them all? 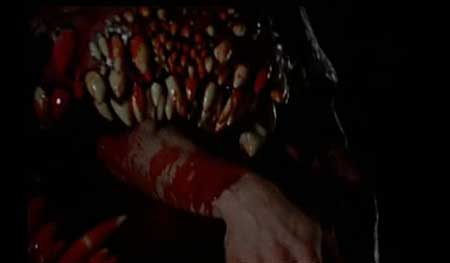 While graphic quality leaves much to be desired and the main monster itself appears to be little more than a rubber blob with warts, pimples and teeth, it is sparingly used wisely and its shadow is used more often much more effectively. As for the tadpole type creatures, they are quite believable consistently fluttering and flopping around through the water scenes, probably cutting edge special effects for the time (1983).

And, since the film is called The Deadly Spawn, this is a good thing.