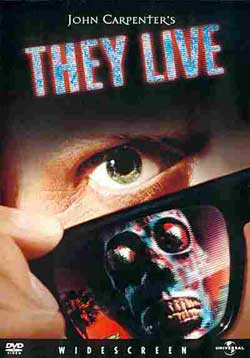 A drifter discovers a pair of sunglasses that allow him to wake up to the fact that aliens have taken over the Earth.

“I have come here to chew bubblegum and kick ass… and I’m all out of bubblegum.

“Brother, life’s a bitch… and she’s back in heat.”

They Live”, is a title that almost demands attention with the single satisfaction of well known Director John Carpenter behind it. It features all his classic trademarks including an excusive brooding soundtrack that sets the tone almost immediately. It was a starring role for Wrestler Roddy Piper who handled his role quite well bringing enough of that overconfidence he uses in his wrestling circles to the screen. “The Live” is a film about aliens…but more so it also sends a deep penetrating message about our society and how like “sheep” we are drawn to the sensationalism of advertising blindness.

The one thing you can easily predict is that if a trend begins to form, you can usually trace the bread trails. In this case, 1988 was also the year of other alien films like “Alien Nation” which went on to become a short lived TV series. “They Live” was one of Carpenter’s entry into the science fiction arena still crossing the hybrids a bit with horror. Whether you liked Roddy Piper’s “Nada” character or not, you still had to appreciate the film’s reveal about a society that has been living with blinders on. Those trademark generic labels stating “Sleep”, “Produce” and “Obey”…it almost appears like something our government would implement whether infiltrated by aliens or not. Mass control…mass conditioning, invisible to our naked eyes…makes you wonder!! 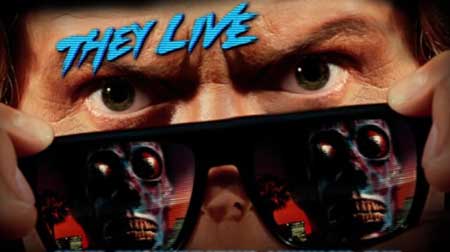 Nada is a drifter who works on local constructions site. One of his co-workers Frank Armitage (Keith David), asks him down to a local spot. Nada begins to notice a few things not adding up circulating around the church nearby. Further investigation reveals a recorded audio tape, strange glasses and piles of cardboard boxes containing even more.

These glasses are the planet’s wake up call revealing the aliens true identities and camouflaged advertisements placed in every sign, billboard, and commercial location. Nada soon discovers that while not all humans are aliens, quite a few of them are living among us in human form. The glasses when placed on the wearers eyes reveal a harrowing skull-like skeletal face structure that is otherwise hidden to human view. The aliens of course are upper class citizens involved in higher echelon positions. They carry an alert system “watch” that they use to flag those who can “see” to the authorities.

Nada proceeds to try and convince his friend Frank, who refuses. This elevates into a brutal fistfight that lasts for (what seemed like) 10 minutes. This particular scene is a trademark moment for the film (which in other circumstances would be over quickly moving on to the next scene). Instead these 2 muscle giants battle back and forth in an alley-way pummeling each other back and forth. The scene never seems to break away which means that the actors had to carry the entire moment without cutaway. In respect it almost becomes a humor point for the film.

Nada learns that the glasses are called “Hofmann lenses”, after the creator. He also has a run in with a woman named Holly Thompson (Meg Foster) of which he befriends after invading her house. Meg is hard to miss with her real life piercing, pale eyes that almost appear alien in their natural state. Holly becomes a part of the discovery which eventually leads to a TV station broadcasting subliminals to the world. 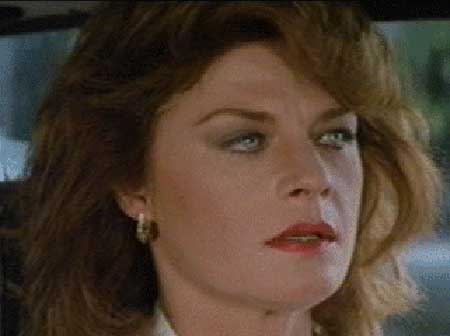 “They Live” is often regarded in the sense of a cult film for its bold take on political subversive ness. It was considered an underrated achievement for director John Carpenter but has gone on to be highly regard to Carpenter’s fans as one of his best works. It’s worthy to note that the reoccurring “Obey” bears striking resemblance to the words “Obama” bring fiction and reality into a somewhat curious union. 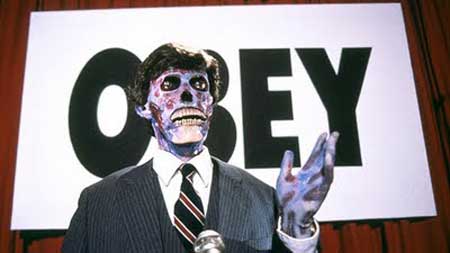 “They Live” has its share of story holes and quirky acting, though despite that, it is considered a throwback to the science fiction classics with its particular take on alien invasion. In research the name of Frank Armitage was inspired by a character of same name within H.P Lovecrafts The Dunwich Horror. “They Live” is a fun film that can be re-watched over and over again without ever really tiring. As an alien film it ranks among my top 20.