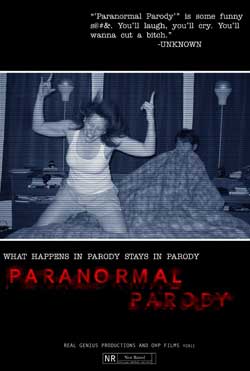 After a young couple moves into a new house, they start to experience some strange events, that just might be demonic. So they decide to videotape the whole thing. Sound familiar? At least this time the demon has a sense of humor

Ever since the viral craze of “Paranormal Activity” hit, there has been a wave of films taking a similar approach to horror. When it was apparent that the first wouldn’t be a one hit wonder with 2 successful follow-ups, another interesting thing began to brew. That is, much in the same vein as the Twilight parodies…a rush of “Paranormal” parodies. There have even been a few released “without” the intention of being funny that copy-approached their premise in the same way, but fell flat on their face.

“Paranormal Parody” succeeds where alot of others have failed. I lost count but I remember seeing at least 2 films prior to this one that took a comedic approach (to PA) and fastly put me to sleep. What this usually meant was, they didn’t make it to review stage if I couldn’t stay awake long enough to write about them.

C.J. Goodman brings enough wit and charm to this production that it carries its way thru to its end finale. We know the story, we know the routine…now it’s just a matter of mixing things up a bit to make them cute, funny, or charming. “Paranormal Parody” has a little bit of each as it tackles a much too familiar ghost that haunts a couple willing to video tape every moment. While every scene may not stand up to “roll on the floor” moments, there are quite a few that will at least make you smile. I particularly like the cat scene where a stray cat battles against their rogue Ouija ball. Ouija ball? yep no boards here.

Other subtle bits include props such as a “Dummies book of Demonology” and so on. Even the famed “stand by the bed pose” gets toyed with enough to bring a chuckle or 2. “Paranormal Parody” stars Kristen Kakos as Kristen and Benjamin Euphrat as Ben. The 2 of them connect on a chemistry level that seems believable with a perfect model of typical couples today. In fact even the sarcasm could easily mirror the “ever so frustrated” wife who doesn’t “quite” get her husband’s fascinations. Added to this round is the jumbled voice of a demon who also sounds like he wants to have a little fun while haunting.

Independents are hard to pull of especially when it comes to comedy based on a popular franchise. To date I have had to review 3 films that make fun of Twilight and found myself wishing they would just roll to credits so I could move on to something else. “Paranormal Parody” is no masterpiece though it does present a nice collection of funny moments and “couple bickering”. Actor Benjamin Euphrat is simply likeable which makes his role that much more easier to consume. Kristen Kakos seems to be the perfect match for this film that doesn’t mind rolling her eyes a few times to the sound of her on-screen husband’s voice. The end features 3 endings which simply make fun of the original film. I don’t think it’s a spoiler by saying that there is a fake body prop thrown against the screen mimicking the original that had me chuckling pretty hard. Paranormal Parody is exacty that, a parody, viewers shouldn’t expect anything but.

Other highlights included the reo ccurring use of the word “ass hat” (or was it ass face??, I forget). I did also enjoy the screaming refrigerator (ya, you’ll have to see what I mean)

Oh by the way, I will say that the house they used seemed a bit too kick ass for a paranormal film, though the hallways and rooms still worked quite well. But there was more than one time i turned to my wife to say…nice house, we got to get one of those.

In all Director / writer .J. Goodman has put together a solid comedy worthy of date night. Fans of the franchise will love the comedic flair and most likely enjoy the new perspectives. If your fan of horror comedies, then I believe you’ll enjoy what this has to offer. 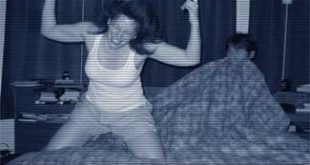