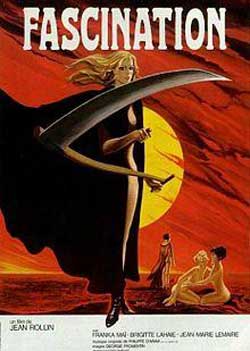 This film is a beautiful piece of genius sexploitation as only director Jean Rollin can deliver. As far as quality euro-smut from the 70’Erly 80’a goes I think you have only 3 names to really look too and that would be Tinto Brass, Jess Franco and Jean Rollin. Brass was far more famous with” Caligula” and a tad more dirty with as well. Franco was way more prolific with more than 100 plus films to his name but Jean Rollin’s works have a certain style and art to them that his contemporaries lack. 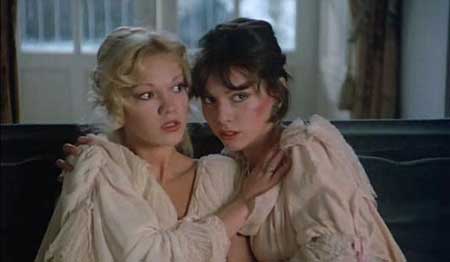 “Fascination” is not a gore film; Rollin is attributed with the first French Gore film his “Grapes of Death” but “Fascination” is a fairly “dry” film despite the blood drinking at an abattoir at the opening of the film. And if you see “Grapes of Death” it’s not really all that gory in comparison to say what Fulci was doing at the time. Then again a lot of films (even horror films) aren’t really that gory in comparison to Fulci on a whole but that is another 3000 words on the works of Fulci… So for another time then… 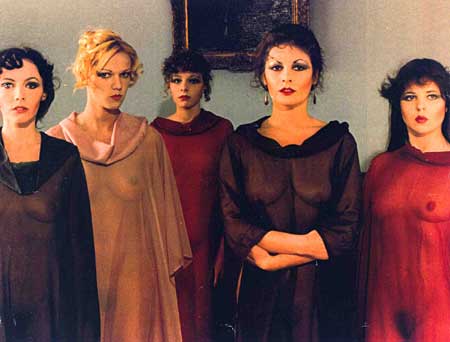 There is a something very Edgar Allen Poe about “Fascination.” By Poe I mean “The System of Doctor Tarr and Professor Fether.”The plot starts out with a bandit whom doubles crosses his thieving buddies and winds up on the lam from them in remote castle. While hiding inside he is greeted by two beautiful nymph servant girls Eva and Elizabeth (Brigitte Lahaie & Franca Maï.) They explain to him that he should wait there for their mistress to come… Or possibly death…

Oddly Bridgitte Lahaie did p*rn in France, I say oddly because she’s really beautiful, and this is back when at least American p*rn stars didn’t have that “supermodel” Tera Patrick/Bree Olsen look to them. Then again my knowledge of 70’s Euro-p*rn is limited because well, I don’t have that much time on my hands –no pun intended, but the short of it is if you get a hold of some of her works like “Paris Telefon 666” or “Vibrations Sexuells” and Bridgitte does hard core scenes. Careers like this don’t really happen in America but p*rn producers LOVE to tell aspiring actresses that they do… Bridgitte also worked with Jesus Franco on “Faceless” which connects a few dots being that Jesus directed a few p*rn films. Wow, I just wrote “Jesus Directed a few p*rn films” something about that warms my heart. Bridgitte started working with Rollin in “Grapes of Death” and “Fascination” was her second real roll now she’s like old and has her own talk radio show… If Sasha Grey wasn’t a total f*cking pretentious air head I could total see her with the same gig in 30 years… 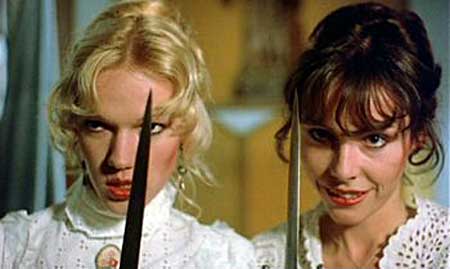 Rollin typical directed sexploitation films that deal with 2 of my favorite topics: lesbians and vampires, and he used really gorgeous actresses in dealing with these most important topics of our time or any time really. But anyone can direct a skin flick, and directing a lesbian vampire film is kind of like shooting fish in a barrel –now making it art is something entirely different, don’t believe you can fail at that one Seduction Cinema does a great job of churning out artless yet wonderful to look at lesbian vampire crap… Shooting nudity is one thing, shooting a sexploitation film that is at times creepy and keeps your interests beyond the gratuitous full frontal nudity totally different story. Yet I wouldn’t call “Fascination” a vampire film, as much I would call Rollin’s “Living Dead Girl” a zombie film, which I really wouldn’t. However if you’ve never seen the genera and have only a very limited point of reference let me put it to you this way…. It’s as much as vampire film as “Blade/Van Hellsing/Underworld” are… cause they are more just action films and very little vampire or even horror stuff happens in them. But “Fascination” feels more literary, intelligent and has nice moments of uncomfortable tension. No one really has fear of anyone else in the film despite a few corpses, knives, guns and axes, which spurns their curiosity about each other and the characters curiosity and intrepid desire leads them into danger.

The power struggles between the seemingly weak and what appear to be the strong throughout the film are on par with a film Paul Morrissey’s “Andy Warhol’s Dracula” a.k.a. “Blood For Dracula” –there is the constant anticipation that either of the servant girls will be raped by the bandit, yet by the middle of the film Rollin is leading you down a path of who really is in power and doing so with extremely sexy and stylized imagery… By Stylized I mean something like one of characters goes on a killing spree wearing a black robe and scythe and she does it commando style… I guess it’s like high school graduation where you’re supposed to be naked under the robe, only difference is at graduation they don’t like it if you’re “peeking out” –with Jean Rollin peeking out is kind of the point. 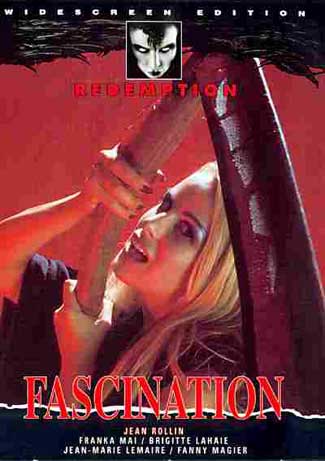 This film is verbosely classic in its gothic presentation, think Hammer with a shade or two less melodrama and less concerned with ethics and morals or good over coming evil –the standard theme in most things Hammer… Also “Fascination” is not shot on sets or with the grandiose costumes pieces that were also stereotypical to vintage Hammer. “Fascination” is like being taken on tour of a mistresses dungeon, on the tour she shows you lots of beautiful women tied up and she shows you lots of beautiful sexy things but at no point does it any of it reach a typical vanilla climax. The film intrigues you with its strangeness and keeps you interested by presenting you the possibility of one story line and then it takes its clothes off and teases you in a totally different direction. 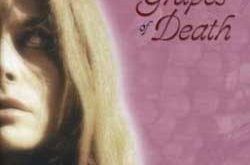 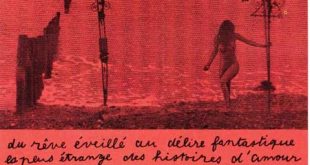