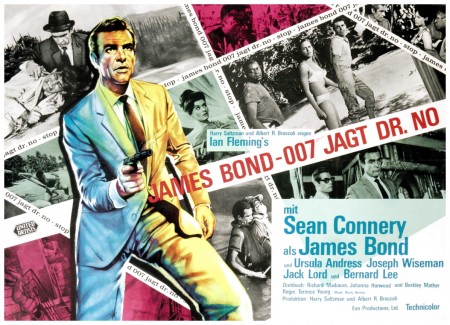 “James Bond 007, seductive British secret agent, has been sent to the West Indies to investigate the disappearance of British agent John Strangway and his secretary. Once arriving, 007 becomes suspicious of scientist Professor Dent, who was the last person to have seen Strangway before he disappeared. After learning Professor Dent is working for a terrorist with metal hands, Doctor Julius No, and Strangway is dead, 007 meets CIA agent Felix Leiter and his assistant Quarrel in Jamiaca. 007 and Quarrel head to the tropical island Crab Key, after encountering the beautiful Honey Ryder, 007 finds the island is Doctor No’s secret lair and 007 and Honey are captured but Quarrel is killed. Where 007 learns Doctor No is has been disrupting the American rocket launches at NASA and he is out for world domination and plots to unleash his vengeance on the United States of America. Can James Bond defeat Doctor No and save the world?” (courtesy IMDB)

Thematically, science fiction films in the sixties began to diversify and get away from the bug-eyed monsters that typified the genre during the fifties. There are few science fiction movies made between 1960 and 1970 that could be called a typical sixties film, although the decade did see a minor trend in satire such as Doctor Strangelove (1964), The President’s Analyst (1967), The Day The Fish Came Out (1967), Barbarella (1968) and The Bed Sitting Room (1969). The sixties also blurred the edges between science fiction films and other cinema genres, a trend that began with the James Bond film Doctor No (1962), which assimilated traditional science fiction elements – mad scientists, futuristic laboratories, mysterious rays, rocketships – into the framework of an ultra-slick contemporary action thriller. Since the early days of cinema, melodrama had often incorporated futuristic inventions into their story-lines, but the James Bond films helped make science fiction paraphernalia respectable.

Doctor No starts off as a fairly straightforward thriller – although its mixture of violence and black humour was unusual for 1962 – with secret agent James Bond being sent to Jamaica to find out why two British colleagues stationed there have mysteriously disappeared. By the end of the film, the audience has been led into a world straight out of an old movie serial, complete with an oriental super-villain and an underground headquarters full of weird and wonderful gadgets. The difference was that most of the fictional devices in the film were only a step or two ahead of contemporary reality, whereas when the serials were made, they were still far-flung fantasies. By 1962 the space race was in full swing and audiences were willing to accept things that they would have scoffed at a decade before.

The villain, who sabotages American rockets as they take off from Cape Canaveral by means of a powerful radio transmitter, also had a contemporary relevance which his cinematic ancestors such as Fu Manchu lacked. Doctor No is, significantly, half German and, when James Bond asks him if he works for the Russians, he replies, “East. West. Mere points of the compass, Mr. Bond. I offered my services to both and they refused. Now they will pay.” Stanley Kubrick took this parallel to its ultimate conclusion in his film Doctor Strangelove, which ends with a German scientist who works for America get so excited at the outbreak of nuclear war that he lurches out of wheelchair screaming “Mein Fuhrer! I can walk!” Like Doctor No, Strangelove also has a mechanical hand.

Doctor No represents the end of a long line of mad scientists and as such incorporates many of their characteristics. Like Fu Manchu, he is oriental. Like Rotwang in Metropolis (1926), he has a mechanical hand – two of them, in fact. Like Captain Nemo, he has an obsession with the sea. Like Doctor Moreau, he enjoys toying with people and inflicting pain for its own sake. But unlike the character depicted in Ian Fleming‘s novel, the film’s Doctor No also has control over the world’s most potent post-WWII symbol, atomic power itself. Bubbling away beneath its water-shield in the centre of his laboratory is an atomic reactor which he uses to provide energy for his giant transmitter and, significantly, it’s the reactor that eventually kills him. In a fight with James Bond on a catwalk above the reactor, he falls onto a platform that is descending into the pool and, since his mechanical hands are unable to grip onto the wet slippery metal, he is slowly boiled alive in the reactor’s water-shield. By the way, there is a small but important scientific error here.The reactor runs wild when the control rods are inserted whereas, in reality, the removal of the rods would cause this to happen.

Directed by Terence Young and written by Richard Maibaum, Johanna Harwood and Berkely Mather, Doctor No was a tremendous financial success and quickly became a trendsetter. By the time the third Bond film, Goldfinger (1964), was being made, imitations were already beginning to flood onto cinema and television screens, most of which contained plenty of overt science fiction elements within their story-lines. On television came such series as The Man From UNCLE, Amos Burke Secret Agent, The Wild Wild West and The Avengers, and in the cinema came the Matt Helm and Derek Flint series of films. As the Bond series continued it became increasingly science fiction oriented and increasingly successful.

It’s interesting today to see how much the series has changed over the years – bigger is not necessarily better. Little-known actor Sean Connery became a superstar overnight as the dashing, debonair British agent 007, a new type of hero: He had a license to kill; practiced judo; was a well-educated gentleman; dressed well; had great taste in food, met only beautiful women, could take on villains, traveled to exotic locations; refused to panic when the fate of the world rested on his shoulders; had charm and a subtle sense of humour; and had his own theme music that would play just by saying his name.

The story, concerning Bond and beautiful Honeychile Ryder (Ursula Andress) tracking down master villain Doctor No (Joseph Wiseman) on Crab Key Island near Jamaica, may sound like an old movie serial but producers Cubby Broccoli and Harry Saltzman kept the film from deteriorating to a juvenile level. The movie has sex, violence, wit, fantastic action and colourful atmosphere. Connery, Wiseman and Andress all give memorable performances. Admittedly, there’s a bit of a slow patch in the middle and Doctor No could use a decent henchman, but otherwise the movie works marvelously, definitely different for its era. Looking back, one can understand why it caused so much excitement. It’s on this retrospective note I’ll bid you a good night and look forward to your company next week when I have another opportunity to simultaneously raise both hackles and cackles with more dreadful dross from the drains of Los Angeles in another trouser-moistening fear-filled film review for…Horror News! Toodles!