Home | Watch the PROMETHEUS clip they showed at Wonder Con!

Watch the PROMETHEUS clip they showed at Wonder Con!

Suddenly there is PROMETHEUS everywhere but damn it’s all really good stuff so why not?

Today 20th Century Fox sent along the clip that they thrilled WONDER CON audiences with last weekend. Really nothing more than a really fast highlight reel but it certainly manages to peak your interest.

In the distant future, two superpowers control Earth and fight each other for all the solar system’s natural resources. When one side dispatches a team to a distant planet to terraform it for human colonization, the team discovers an indigenous race of bio-mechanoid killers. Ridley Scott, director of ‘Alien’ and ‘Blade Runner,’ returns to the genre he helped define. With PROMETHEUS, he creates a groundbreaking mythology, in which a team of explorers discover a clue to the origins of mankind on Earth, leading them on a thrilling journey to the darkest corners of the universe. There, they must fight a terrifying battle to save the future of the human race. 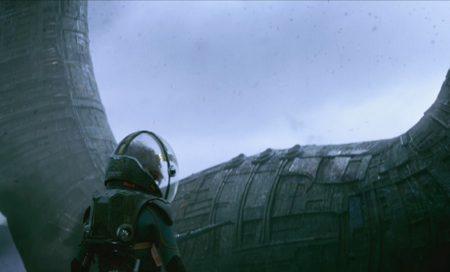