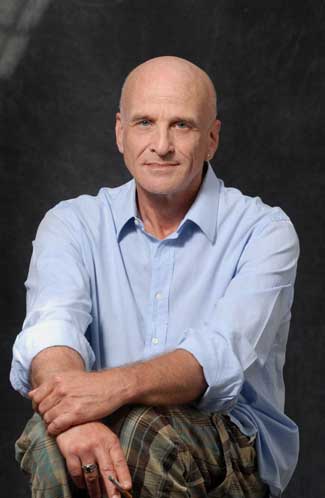 From psychopathic to ecclesiastic!
An interview with the former bad boy of Italian horror cinema, John Morghen!

John Morghen, or Giovanni Lombardo Radice if you will, is one actor whose characters always seemed to get into a lot of trouble. Perhaps he was type casted a lot, but there wasn´t many other actors had could portray these characters in such a vivid way that John, or Johnny as he prefers to be called, did. I remember seeing that famous drill scene from City of the living dead over and over again, looked in amazement over the giant hole he got in his stomach in Cannibal Apokalypse, cringed when his private parts was cut off in Cannibal Ferox, rooted for his character Ricky in House at the edge of the park and enjoyed his portrayal of the homosexual Brett in Stage fright. But Johnny has done so much more than these low budget shockers.

Because Johnny is multilingual, he has no problems to work in either Italian, French or English productions. He has proven his talents by appearing in various stage plays, drama movies and directing operas among other things. If the eighties was his way up to stardom, the last decade has been a lot more profitable for him with big budget teveseries and the remake of The Omen which has made him a star. Heeeeere´s Johnny!

1. Even though movies like House at the edge of the park, Cannibal Apocalypse, Cannibal Ferox, City Of The Living Dead and Stage Fright were made long ago, it seems like having a life of their own. Do you feel intimidated that so many remember you from these kinds of movies? And is it weird to be recognized even in a small cold country as Sweden?

At the beginning, some years ago, when I found out that my old movies had so many fans I was quite surprised. By now I got used to it and accepted this fact with pleasure, because it’s always good to be liked and remembered even by young people who weren’t even born when those movies were shot.

2. Many of the roles that you played, especially in the eighties, often ended in gruesome deaths. Was it a conscience choice to accept these roles, or was it the only roles offered to you?

Italian directors do not have a great amount of fantasy. I started with a thriller (House At The Edge Of The Park) with a crazy neurotic kind of character and was typecast as such. I did what they offered me and never hid the fact that horror movies are not the ones I prefer. But I always tried to do my best and treated the scripts as if they were by Shakespeare (a bit hard at times…). Later on I was called for different things, but mainly for TV productions (most generally European fiction shot in English). So I also had fun with Middle Ages sagas or the Bible. But I am aware that my popularity stills come from the horror movies. 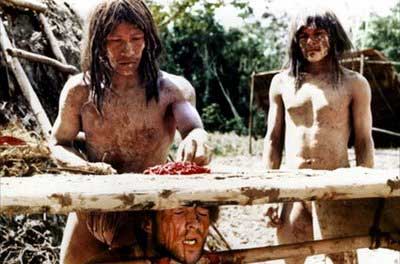 3. Which movie was the worst experience to appear in and which one has been the best?

Cannibal Ferox was an atrocious movie. I hated it from the beginning. I accepted it only because I needed the money and regretted afterwards because of the pointless and stupid racist violence in it. Surely the only one movie I am ashamed of and the most difficult and hard to shoot, because of the locations in the jungle, and the continual shouting by the director (he wasn’t shouting at me, but it was enervating all the same).
The best- even watching it back after almost thirty years- was Cannibal Apocalypse, because director Antonio Margheriti was a real gentleman and an enchanting person and I liked the character of Charlie Bukowski very much.

4. My all time favourite film with you, as the gay actor Brett, is Michele Soavi´s Stage Fright. You gave a great and memorable performance in that one. Do you have any fun memories from that set?

Shooting was hard because it was a very low budget movie, but we were all quite enthusiastic about being there because of the passion Michele Soavi was putting in the movie (his first one). I was a great friend of his since we had met whilst shooting Lucio Fulci’s Gates Of Hell and so I was very eager to give him my best. Furthermore I liked the role, because it was the first “funny” role I was offered and on stage I have a reputation for being a pretty good comedy actor. Michele gave me the freedom to improvise and I remember funny bitching dialogues with Mary Sellers. 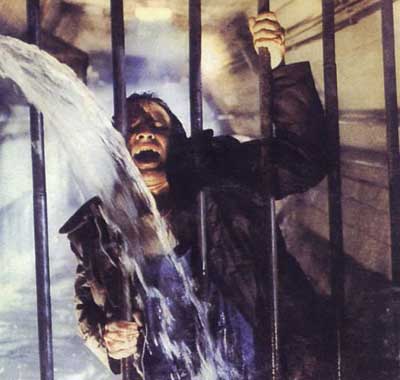 5. You also work as a screenwriter, appear in stage plays, television series, translate plays and have directed some operas. What do you enjoy the most? And how do you find the energy and motivation?

Well… money is always a very good motivation, but this apart I always put a lot of energy in whatever I do and I like to change because I bore easily. The work as screenwriter is surely the one I liked the less, because I was writing mostly for TV series and when you do that your freedom as a writer is very limited. I love the stage and miss it terribly if I am not playing for a while and I adore the movies, because of the electric atmosphere on set, the rush, the sense of adventure, exotic locations. I am a bit of a gipsy actually, so the movies tribe is really the kind of company apt for me. Translating is a quiet, homely work that I do a lot, because I can do it wherever and I think I am pretty good at it. I translate plays and to do that, in my opinion, you must have an actor’s “ear”, the immediate feeling that a line sounds right or wrong.

6. Since many of the movies made were produced on a moderate budget, was it some special connection among the actors? Do you have contact with any of the old colleagues?

I got along very well with many actors whilst shooting, but afterwards I kept in touch with very few. I am in touch with David Hess and love him a lot and I had recently the pleasure of being to some conventions with Catriona McCall, who’s really a charming and sweet person. I occasionally meet in Rome Antonella Interlenghi (still beautiful as a rose) and, as for the directors I am in touch with Deodato and of course Soavi. 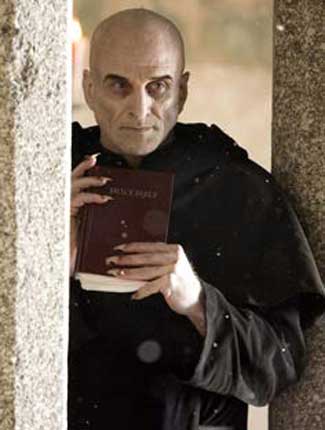 7. Soavi´s visually stunning The Church marked a turning point for your acting; you played a priest for the first time, which you also portrayed in the remake of The Omen. Do you think with age your appearance changed from rebellious punk, to a more serene confident look?

You only mention the Omen, but as a matter of fact I had a brilliant Ecclesiastic career since The Church, because I was promoted Cardinal in a Luigi Magni Tv movie (La Notte Di Pasquino) and then I was pope Pius XII in another Italian TV movie. And I fondly remember the other priest I played with Deodato in another movie I did with him – Can’t remember the English title – because my partner was Michael York and he was absolutely terrific. A real thrill. (The movie is called Phantom of Death)
As for my appearance… I really don’t know. They keep calling me mostly for bad guys, but probably age gave me a subtler quality of evilness, as it happens with father Spiletto in the Omen.

8. Martin Scorsese´s Gangs of New York also featured you in a little role, how did you get that part?

I wouldn’t really call it a role. It was almost an extra job, even if I was paid as an actor and stayed on set for one week. In the original script the actors playing Uncle Tom’s Cabin had a few lines, but they were cut before shooting because of the considerable length of the movie. At that point my agent didn’t want me to do it, but I insisted because I was curious about the huge reconstruction of the Nineteen Century New York, the big cast and the importance of the movie. To me it was fun, but if you blink an eye you wouldn’t know I was there. So I don’t even put it in my curriculum. 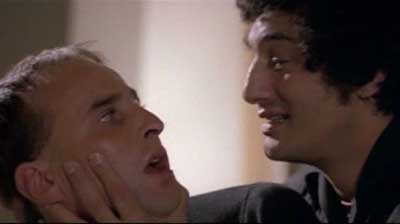 9. Since you work on several continents and in different languages, what’s the biggest difference from Italian filmmaking from, let’s say, American?

Money and fantasy, strongly related one to the other. American directors generally work with big budgets and they can have whatever they ask and take their time for special effects or difficult scenes. Italian directors, most especially the horror ones I worked with, worked with little money and thus had to stimulate their fantasy to realise the sequences they had in mind. And as for that the Italian crews are incredibly good. They can do whatever out of a string and a piece of wood. And at times it’s more fun to be on a low budget movie set than on a rich one (salary apart, of course…)

10. If you get to show your fans one movie you have made from each decade, the seventies, eighties, nineties and the new millennia, which ones would you choose?

In the Seventies I wasn’t yet in the movies. My first movie (House At The Edge Of The Park) was shot at the end of 1979 and released in 1980. So I’ll name two for the Eighties and they are House At The Edge Of The Park and Cannibal Apocalypse. As for the Nineties I would say the TV mini-series The Heart And The Sword (directed by Fabrizio Costa) and for the new millennia the Bible episode about Saint Paul in which I was the cruel king Herod Agrippa. 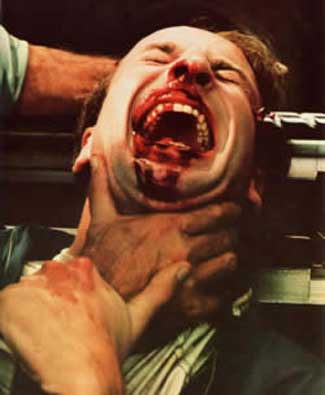 11. The final question is the one I ask to every prominent person interviewed. Mr. Morghen, What is the meaning of life?

A hard one… I’ll answer you with a quote from Life Is A Dream by the Seventeen Century Spanish dramatist Pedro Calderon de la Barca: “But whether this might be reality or a dream, only one thing matters: to behave well. If it’s reality because it is and otherwise to find friends for the awakening moment”

Clip From STAGE FRIGHT “Nails It!” 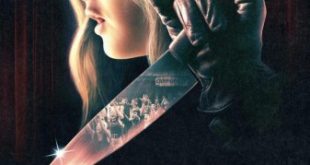 STAGE FRIGHT Gets A Trailer And A Poster