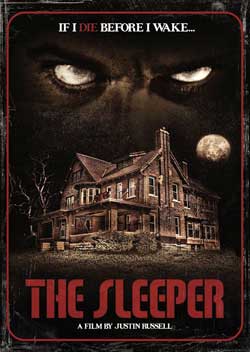 It’s 1981 and the girls of Alpha Gamma Theta sorority are having a party. As the new pledges arrive, so does an uninvited guest. Little do the sisters know someone is watching them in the shadows? As the girls shower, study, eat and sleep the stalker studies the girls. One by one he finds the girls at their most vulnerable and murders them. The police hunt for the missing girls and their killer, but will they find them in time? Or will the girls be forced to fight for their lives…

It’s not often that a killer’s primary choice of instrument is a claw hammer, but in the 2012 Gamma Knife Films flick, The Sleeper it is. It’s 1981 and the Sleeper, a stocky, but more so heavy set madman, harboring chilling white, somewhat glazed over wild eyes, a crew cut and an extremely cold disposition is making crying like prank phone calls to his next victim, Cindy, a member of Alpha Gamma Theta whose sorority house is throwing a party, is his first intended victim. Having initially stalked and taken a picture of her while hiding in the shadows, he now grips the black and white photograph with shaking black leather gloved hands, twists opens a tube of red lipstick and proceeds to draw circles around her mouth and eyes, all the while breathing laboriously through a combination of hysterical half-giggling cries. 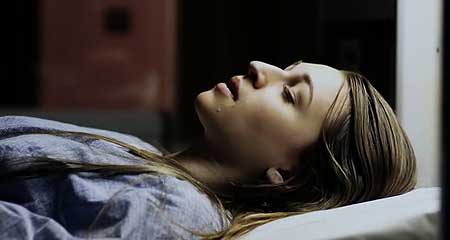 He watches the house from the darkness until the party is over and only creeps in after the typical nudity and sex scene, indigenous to almost all the era’s slasher films. As Cindy is lying asleep in her bed, the killer raises the hammer and brings the implement crashing down onto her head. Her head collapses, literally, obviously being a rubber mask and I found myself hoping that the gore throughout the rest of the film wasn’t as terrible. To my surprise, with the exception of a shower scene where the victim had taken a blow to the forehead and now sat upright against the tiled wall with a glob of black as coal blood that seemingly had been quickly lopped on for special effect sake, the gore grew considerably better with each murder. And, never have I seen the claw of a hammer used as a throat slicer before. Regardless, although it may not have been believable, the effect, a gruesome wide open gash, was just as effective as had it been the blade of a knife. 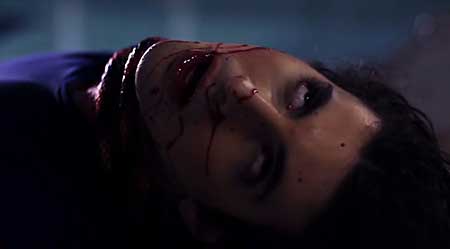 Basically, this is your standard killer is stalking victims and murdering them type yarn and includes a strangulation in which the rope draws blood, and a claw portion of the hammer deeply embedded into both the side of a skull, as well as into an eye socket.

The finally began as Amy was searching, room to room, through the house seeking the missing girls. She finds the sorority house mother dead, becomes horrified and panics. Enter the killer and the chase is on. Running into a room, Amy slams the door behind her. The killer, ala Johnny in The Shining, pounds through the door. Amy escapes and a detective Drake, who is investigating the source of the crank telephone calls, comes into the house. Just when the audience is under the impression that a revelation of why the killer is doing what he’s doing, the killer appears and strikes the detective in the back of the head, killing him and Amy takes off running out of the house and across the college campus grounds with the killer in tow. 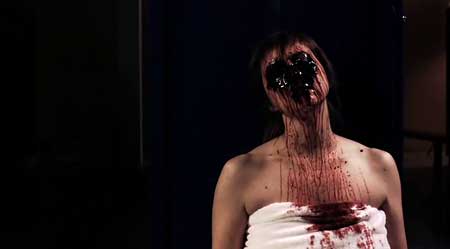 She falls down of course, but manages to get back up and enters a nearby auditorium where she hides underneath a row of seats. The killer knows she is in there somewhere, but can’t find her, and in an exceptionally suspenseful scene, lightly taps the hammer onto the wooden backs of the chairs as he searches attempting to scare her out. Amy hears the door slam closed. Assuming the killer has left, she comes out of hiding to find that the killer has tricked her and now stands mere feet away. She scampers into a side room and finds her roommate dead, seated at what appears to be a kitchen table. Cornered, the killer enters the room and closes in. Amy spots a large butcher knife on the table, takes hold of it and plunges it into him. 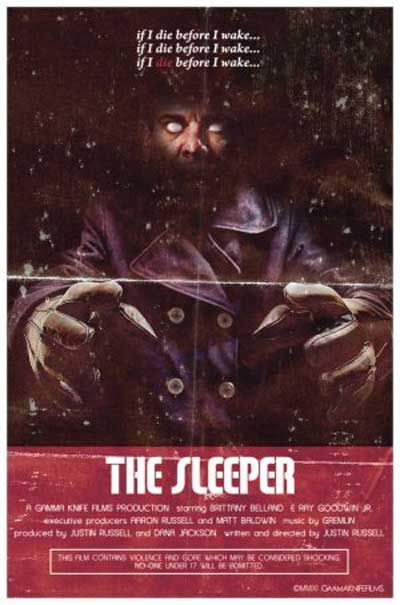 Afterward, in a scene eerily reminiscent of the boat scene where Jason jumps out of the water and attacks, Amy is looking outside, through the window in a door at a sheriff motioning her to come out. Suddenly the killer appears behind her and takes her into his grasp, holding the hammer high. 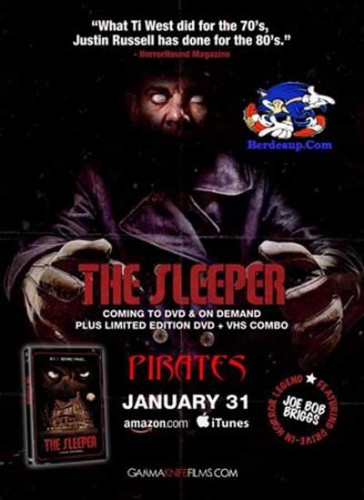 Amy wakes up badly shaken in a hospital room to a doctor telling her that she only had a bad dream, something normal for a person who had been through such trauma. She lies back and the doctor leaves the room. The room’s phone starts ringing and Amy answers it to hear night night Amy in the killer’s voice. She screams and the film ends.

Throughout the film I continued wondering what the killer’s motive was, assuming that the film’s end would fully explain. It didn’t. None-the-less, this film attempts at trying to be a film using The Sleeper starring as a Jason Voorhees or a Michael Myers wannabe. It fails miserably too. However, in all due respect, there are those camera shots, from the bridge of the nose up of the killer’s menacing eyes which, at the very least, partially made up for it.