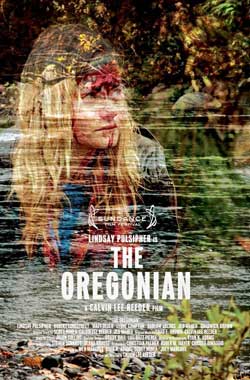 There is a place. A place where the skies are wide and the forests are thick and strange. You can lose yourself forever in these woods. You’ll meet truckers with problems and old women with strange powers. You may even make a furry friend. Just be sure to stay quiet. Spend some time with a woman from Oregon who is lost on the road and running away from her past. Now she has a chance to experience everything the grotesque Northwest has to offer, whether she likes it or not.

The Oregonian,Calvin Reeder’s debut feature, met to audience walkouts and harsh reviews at its Sundance screenings. Among the complaints were a lack of plot and surrealistic imagery devoid of any meaning. The negative buzz didn’t exactly raise expectations, but I told myself that critics aren’t right all the time (the possible exception being myself, of course). At  first I was intrigued by the sights and sounds in front of me, thinking to myself I was in for a surprise. Several minutes and no story developments later, I began to question Reeder’s intent as a writer and director. 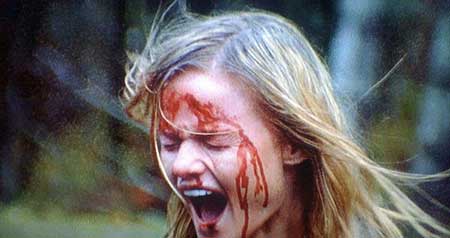 We begin with a woman (True Blood‘s Lindsay Pulsipher) awakening from a car crash. She discovers two dead bodies and wanders off for help. Along the way she encounters some truly odd individuals: an elderly woman who materializes at random (Lynne Compton), a bespectacled smoker who spouts off pseudo-philosophical gibberish (Barlow Jacob), and a pervert masquerading as a Gumby-type character (Matt Olsen). That’s the entire movie described in a few sentences. I’d go so far as to say it’s less a horror movie and more a tour of the Pacific Northwest conducted by Alejandro Jodorowsky or David Lynch. I wanted to believe the symbolism and imagery had a purpose, but I turned the movie off having no idea what it all meant. Maybe I’ve been out of college too long or maybe Reeder’s goals were merely to confuse and frustrate his audience. If there’s a movie that requires a director’s commentary, it’s definitely this one. 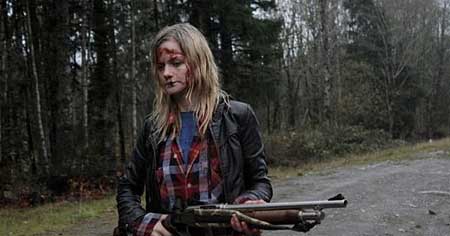 Although I’m baffled by Reeder’s storytelling choices,  I can’t deny his talent for knowing how to disorient his audience. The few music cues present in the movie–distorted, Thurston Moore-esque guitar, harsh ringing noises and a cover of “Pomp & Circumstance”–set a foreboding and unpleasant tone. The use of such tricks as jump cuts and the zoom-in technique effectively convey the lead character’s confusion and worry. Shot in 16mm, the film has the grit and faded appearance of low-budget 70’s horror. The rough visuals are appropriate for the dark, dream-like mood Reeder creates.

I can only comment on Lindsay Pulsipher’s performance as she’s the only actor who’s given things to do. She offers a believable and intense portrayal of a woman who’s in over her head. Although I dislike her work on True Blood, seeing Pulsipher’s work here has changed my opinion of her acting. Some members of the supporting cast do stand out, but let’s face it: this is Lindsay Pulsipher’s movie through and through. She more than meets the challenge of carrying the film on her own. 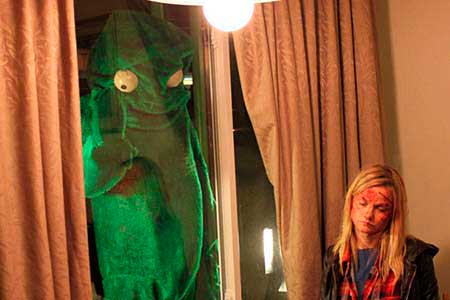 Not without its flaws, The Oregonian is a film I couldn’t take my eyes off of. I hesitate to use the tired phrase “see it for yourself”, but no review could describe the strangeness that is The Oregonian. I will say anyone who doesn’t enjoy experimental film should steer clear. Not only will you be denied answers, you’ll wonder if there are answers to be uncovered. 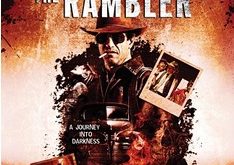 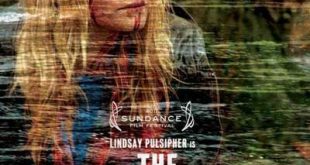