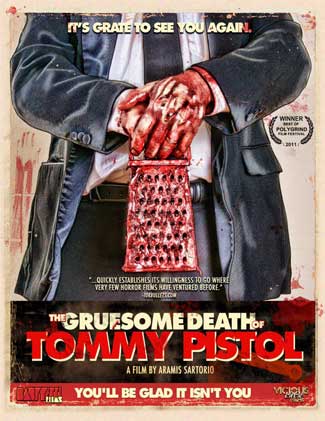 Breaking Glass Pictures has announced the March 27 release of the surreal, horror-comedy “The Gruesome Death of Tommy Pistol” (SRP $24.99).

Director Aramis Sartorio takes viewers on a demented roller-coaster ride through the mind of a down-and-out actor forced to the edge where sanity and fantasy collide, where he must ask himself, “At what point do you give up on your dreams?”

Read our Review of  The Gruesome Death of Tommy Pistol

“The Gruesome Death of Tommy Pistol” follows the disappointing life of struggling actor Tommy Pistol, who has turned his back on family and friends to pursue his dream of stardom.

When he finally hits rock bottom, Tommy seeks solace in a penis pump and finds himself in a fantasy world where he pursues bloody vengeance against those who’ve put him down.

What he doesn’t realize is that his whole life has been leading up to the moment when he awakes to find that he’s run out of second chances, and despite his regret, there is no going back.

10KBullets applauded its “willingness to go where very few horror films have gone before.” “Gruesome Death” has captivated viewers and made top horror films lists for 2011 as well as being named Best of the 2011 Pollygrind Film Festival. 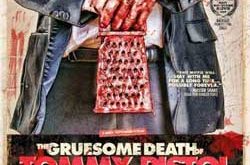