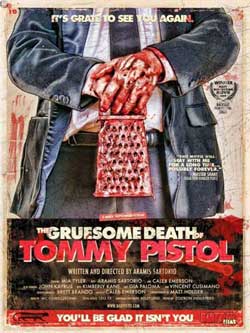 The Gruesome Death of Tommy Pistol follows the disappointing life of struggling actor Tommy P, who has turned his back on family and friends to pursue his dream of stardom and when he finally hits rock bottom, Tommy seeks solace in a penis pump and discovers that even in his dreams, he still fails miserably. What he doesn’t realize is that his whole life has been leading up to the moment when he awakes to find that he’s run out of second chances, and despite his regret, there is no going back.

In this anthology of twisted, Cronenberg-on-meth-in-a-one-night-stand-with-H.G. Lewis-inspired nightmares, poor Tommy has in fact lost it all and hit rock bottom – he gets fired, loses an acting gig, and his family walks out on him because he refuses to give up his dream of hitting the big time. What’s a poor broken sap to do? Well in his case you throw on some p*rn, slap a hotdog in the microwave for 20 minutes (??), slide on the penis pump while his wiener cooks (yeah, I went there), and drift off into a not so peaceful slumber involving three dreams (hence, yep I said “hence”, anthology) ranging from finally making it as an actor in a snuff film he thinks is make believe to literally slipping into the skin of another actor to get a part to getting to direct his own p*rn when a radioactive spider bite does NOT give anyone great power or great responsibility but instead starts a zombie outbreak. Well hot damn, bend over and LET BRUCE BRUCE HIT IT!!!! 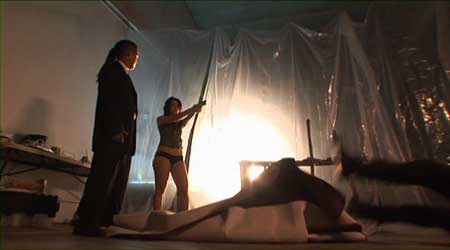 Here we go, folks – the oft-dreaded anthology flick. I say that because I seem to have been handed primarily indie horror (which I love) to review in the past year or so, so it seems every time I get one in the mail from Big Bossman to review I cross my fingers and eyes hoping for something in the vein of FRANKENSTIEN UNLIMITED or SLICES, which keep the spirit and flavor of the kickass big-studio anthology flicks from my youth like ASYLUM, CREEPSHOW, and BODY BAGS fully intact. Sadly though, I usually wind up with dreck like CREEPSHOW 3 (which in my mind is still a very, very bad dream) and I’d be lying if I said that hasn’t hardened me a bit when it comes to how I view these flicks now. I also have to say without a single thread of an apologetic tone, that I am not now nor probably ever will be, a fan of Troma movies, which if one were to look too closely the similarities would be hard to miss. 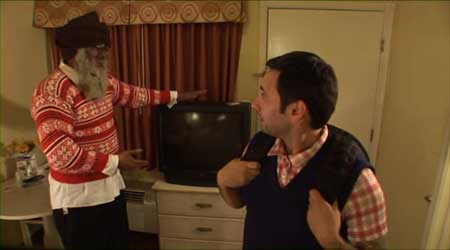 Good thing the first thing I enjoy and look for in even the most extreme low budget indie (after boobs) is a story I can get behind. This one was so far out there that I couldn’t help but laugh and cringe and feel the whole time I was watching it that I’d just taken 37 huge hits of Purple Sticky Punch. I should have known that both Pistol and Sparks come from the adult film world, with their fearlessness and total willingness to bare all AND go all out for their roles, no matter where the roles took them, and Pistol’s comedic timing is nothing short of perfect. 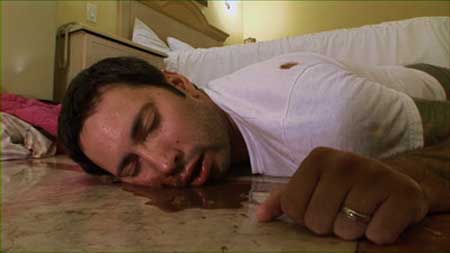 One of the other things I look for first in a movie (after more boobs) is heart…did anyone have it in front of and/or behind the camera? It’s obvious to me here that everyone did, and had a f*cking blast for every second of the filming, and dammit, I loved almost every second of this ode to gorefests of old. Almost because for me, there was too long of a ramp-up to the carnage. Sure, once it finally got going I had a blood-soaked blast and second, the sudden inclusion of a statement of regret over sacrificing family to make it in film came straight out of Buzzkill Buzzkillington’s How Not To End A Movie Handbook and seemed too last-second and heavy handed for my tastes. 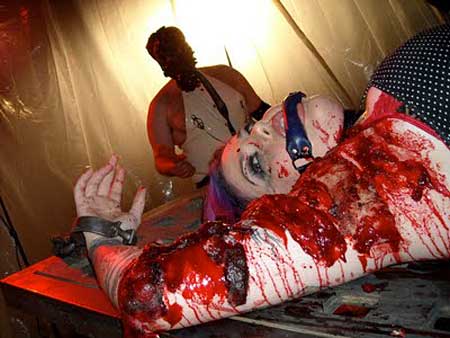 But in between all that, DAMN, and it didn’t tarnish my viewing experience at all…just had to point it out. Gorehounds rejoice and…normally I would say pick this up immediately, but I can’t find anywhere that it’s been released yet so I’ll say definitely watch for it. And on that note, I leave you with two thoughts – one, I will never take a defenseless cheese grater for granted EVER again and B, I must find the nearest adult movie store and stock up on Miss Sparks’ flicks IMMEDIATELY!!! Hmmm, maybe that last thought should’ve been kept internal… 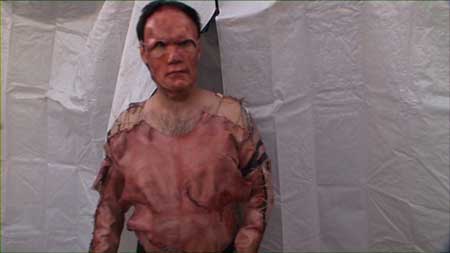 The Gruesome Death of Tommy Pistol (2010) 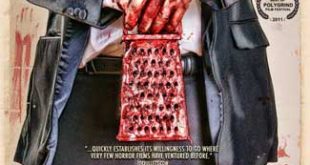