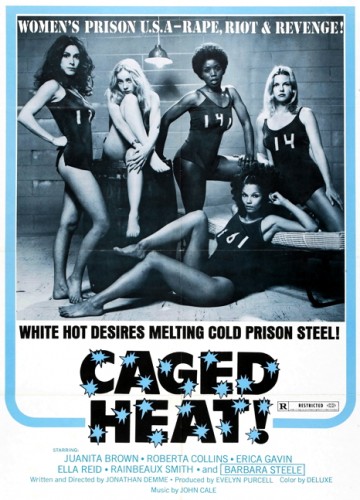 “A girl is caught in a drug bust and sent to the hoosegow. The iron-handed superintendent takes exception to a skit performed by the girls and takes punitive steps, aided by the sadistic doctor who is doing illegal electroshock experiments and raping drugged prisoners. After a while the prisoners put away their petty differences and plan the Big Prison Escape.” (courtesy IMDB)

Caged Heat (1974), also known as Renegade Girls, could be easily dismissed as standard grade-Z issue from the Roger Corman school of genre flicks, with just one exception – Oscar-winning director Jonathan Demme. Just before he made it, he met master filmmaker Bernardo Bertolucci, who asked Demme if he was planning to use a lot of long shots, “You know, scenes that don’t need editing?” It gave Demme pause. Not that you’d know that he consulted with Bertolucci before making Caged Heat. With the faintest of exceptions, you’d never be able to tell it was a work by Demme, accompanied by his future cinematographer Tak Fujimoto. 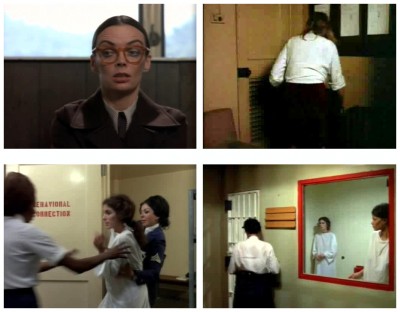 In the acting stakes, Caged Heat offers up a pair of queens in the appealing shape of Roberta Collins and Barbara Steele. Roberta Collins made a career in what became known as the ‘women-in-prison’ sub-genre in films like Caged Heat, The Big Doll House (1971), Women In Cages (1971), and starred in many exploitation films, the most memorable being the prostitute Clara in Tobe Hooper’s Eaten Alive (1977), and as Matilda The Hun in Paul Bartel’s Death Race 2000 (1975). The small amount of screen time given to Barbara Steele as Superintendent McQueen is one of Caged Heat’s failings. This English rose became an icon of low-budget European horror films in the sixties, starting with Black Sunday (1960). Major directors also made use of her talents. Fellini cast her in Eight And A Half (1963), and she had a memorable supporting role in Young Torless (1966), Volker Schlöndorff’s highly regarded first film. She was unable to take the part written especially for her in They Shoot Horses Don’t They? (1969) so it went to Susannah York, as did an Academy Award nomination. Her best roles in the seventies were in David Cronenberg’s Shivers (1975), and in Piranha (1978) as Doctor Mengers aka fish food. This did not lead to better offers in the eighties and she turned to producing the World War Two miniseries The Winds Of War and its sequel War And Remembrance.

Caged Heat also features bares breasts, female wresting, nude solitary confinement, molestations, shootouts, plus a few funny lines in the script, also written by Demme: “The only true consistency with the movies I’ve done so far is hopefully they were done from good scripts. As you know, the vast majority of films are dreadful, mostly because of so few good screenplays. There is a terrible crisis of writing in the motion picture industry. It’s laden with talent in all categories except writing.” 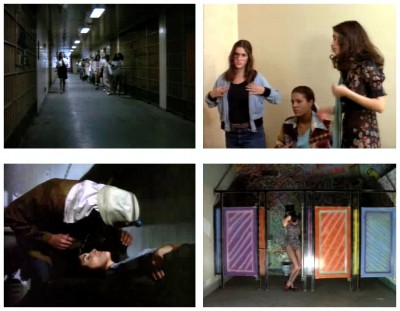 Demme has always retained his gratitude to Corman for giving him his directing start, and gave Corman a cameo in Silence Of The Lambs (1991) as an FBI chief. “Roger is always in charge. You may be the one directing, but he’s still in charge. He’s a great guy, I’m very fond of him. I never get to see him, so one of the few ways to see the tycoon is to cast him in a movie. Roger is always looking for another way to make a little money. When you go to make a deal with him and tell him, ‘Minimum plus a little bit,’ he says, ‘That’s okay, the residuals add up’. I learned from Corman. He talks about how good it is to struggle for ways to find good motivation to move the camera, when to slow down. He teaches you a lot of good stuff – basic, important stuff about how to make a movie that audiences will like.” 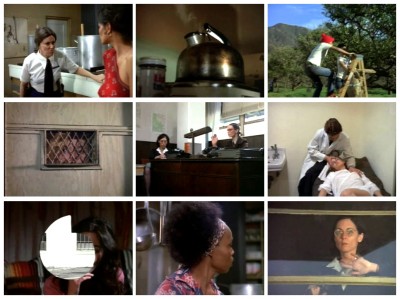 Caged Heat would be the last time the so-called feminist director would be unkind to women, but many of his movies, including Something Wild (1986) and Married To The Mob (1988), have Caged Heat-style streaks of violence. “On the violence front, I do have this ongoing relationship with screen violence and, if you care about violence in society, you inevitably wind-up in some conflicts, some dialogue within yourself about it. My big struggle is wanting to be very responsible and show violence when it’s called for in a piece, as something horrifying, demeaning and something that must be prevented by any means necessary.”

“The little-kid moviegoer in me, that grew up loving westerns and war movies – even though now I know better – still sticks his head out from time to time and gets carried away with a thrilling action scene. I don’t get thrilled anymore if there’s orgiastic, p*rnographic, bullet-spraying kind of violence, violence for violence’s sake. But a movie professing to have a theme of integrity and has one of those showdown kind of moments, I can get swept-up in that as I have for the past thirty or forty years. I wanted to do that as a filmmaker. I failed at that a lot in Married To The Mob, trying to do some exciting, thrilling gunfights. I think I’m a lot more successful in Silence Of The Lambs because that picture really is anti-violence, clearly anti-violence. It’s not a movie that invites you to cheer at violence, it’s a movie that makes you dread violence and, when it rears its head, it wants to confirm to you that violence is awful.”

Searching in vain for a link in Caged Heat to any of Demme’s later work turned up in a very small item: There’s an initial tracking shot down the corridor of prison cells that is the same staging as our first meeting with serial killer Hannibal Lecter in Silence Of The Lambs. Otherwise, the voyeurism and histrionics of this early work quickly disappeared from Demme’s later efforts, as if he had endured some Corrective Physical Therapy himself. “With a single twist of the drill, you’ll see a mellowing effect,” promises the prison doctor in Caged Heat and, sure enough, Demme mellowed and became a masterful, socially and politically conscious artist. It’s with this thought in mind I’d like to quickly thank Projections: A Forum For Filmmakers by Walter Donohue (Faber & Faber 1992) for assisting me in my research for this article, and graciously invite you to please join me again next week so I can poke you in the mind’s eye with another pointed stick from the faggot formerly known as Hollywoodland for…Horror News! Toodles!