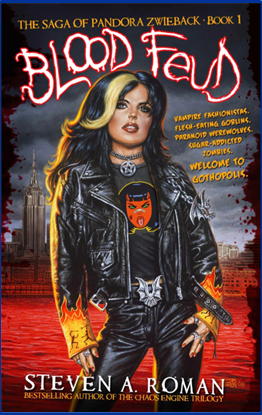 Synopsis:
Sixteen-year-old Goth girl Pandora Zwieback has a major problem: she’s just discovered that her New York City hometown is the stalking ground for every monster and ghoul out to raise a little hell (literally!) . . . BUT she’s apparently the only one who can see them. That means she can’t tell her friends or family about the dangers around them – not unless she wants to spend the rest of her life locked up in a psychiatric ward.

But before Pan has a chance to make sense of her increasingly weird life, she finds herself in the middle of a war among rival vampire clans. Elegant Gothic Lolitas from Japan on one side, silk-suited London vamps on the other, leather-clad hunters from Eastern Europe in the middle, and all after the same prize: a mysterious crate recently delivered to the horror-themed museum owned by Pan’s father.

What is the terrifying secret of Item #179? How do its contents tie into an incident from the blood-drenched past of Pan’s new friend, a 400-year-old, shape-shifting monster hunter named Annie? And, more important, will Pan survive long enough to get answers?

Lately, supernaturally-based teen heroines have become a bit … less than heroic. They’ve become passive, broody, even depressing really. I blame one particular teen heroine and her sparkly vampire boyfriend for this disheartening trend, but I won’t rant about THOSE books here because instead I want to focus on THIS book and THIS heroine. Who is not passive, not broody, and not depressed. Even though she has every right to be.

Pandora (or Pan for short) is a Goth girl with a lot of attitude and a lot of spunk, and unfortunately the ability to see the supernatural hiding out in the world around her. This ability began when she was six years old and her parents and the mental health community took it as a sign that she might have a small case of schizophrenia. Not the usual result in teen fantasy novels, but a pretty realistic one for this day and age. So Pan was put on drugs to keep her “psychosodes” to a minimum, and grew up thinking she was probably batsh*t insane.

But she didn’t let this keep her down or send her into a spiral of self-loathing and unhappiness where she couldn’t even function at human levels anymore (for months and months until her stupid sparkly boyfriend decided to acknowledge her existence again and … wait, not ranting about THOSE books so moving on). She got up, put her big girl pants on, and moved on with her life.

Which is pretty damn impressive. And which makes her exactly the kind of teen heroine that readers should be standing up and cheering for.

Pan is snarky and smart and not afraid of the high school “it crowd” bullies. She loves her friends and she loves her parents more, and she believes that even when things suck the most, eventually they will get better again. She’s a real girl in a real world that just so happens to include demons and vampires and faerie folk flitting around amidst the derelict sections of New York City. And when the proof comes that she isn’t as crazy as she always thought, that the monsters she has been seeing for over half her life are in fact real and some of them want to kill the people she cares about most, she doesn’t just let them. She’s terrified and woefully under skilled at defeating bad guys, but she tries anyway.

Steven A. Roman has written an incredibly enjoyable teen supernatural urban fantasy novel, with a dark and edgy tone that doesn’t try to play light with the sensibilities of younger readers just because they are younger. His world isn’t all fairy tale love and vegetarian vampires and monsters who can be talked out of behaving in unconscionable ways. It is bloody and vicious, even if it is dotted here and there by Goth Loli Japanese vampire girls who are too adorable to be believed – until they rip your head off – and museum curators who are equally obsessed with Boris Karloff and The Mets. In this world demons behave in demonic ways, and vampires are monsters with automatic weapons that can’t be reasoned with, and even angels can fall from grace and try to destroy the world. I suppose in the eyes of some critics and parents, this world might even be a bit too dark for a young adult audience. But compared to a lot of what shows up on TV and in the movies today, it isn’t that extreme. Sex is non-existent, cursing dialogue kept to the barest of minimums, and graphic death scenes are mostly experienced only by non-essential characters. So it is dark, but not splatter-p*rn a la “Hostel” dark. Teens should have no problem with this stuff.

While “Blood Feud” is one of the most entertaining and well-written books in this style that I’ve read this year, there were a few points that irked me. Pan’s friend Annie, the 400-year-old shape-shifting monster hunter, is just a bit too super powerful for my tastes. Not only is she extremely beautiful but she is funny and helpful and smart and quippy and able to take on an entire squad of assassin vampires single-handed and has most of the law enforcement agencies in the city bowing down at her feet. She gets shot but just gets back up again. She has a bad relationship with a fallen angel who tries to murder her, but pops out on top in the end and manages to kill him back instead. There are a few too many things she CAN do and not enough things she CAN’T do for me to relate to or sympathize with her. I prefer even my monster-hunting super chicks to have some human failings (like the wonderfully insecure, bad-relationship magnet Buffy the Vampire Slayer).

I also didn’t care much for the cliffhanger ending. I don’t mind too much when a book is intended as part of series that the end be somewhat ambiguous. It should leave you wanting to run out and buy the next book as soon as possible so you know what happens next. But an all out cliffhanger is just annoying. What if the next book never comes out? Or what if it is two years before it’s released? Will I even remember what happened at the end of this book by then? I’ve been waiting on the last book of a series by L.J. Smith for over 10 years. And sometimes that feels like a really, REALLY long wait (and by the way, I will be buying that book when it finally is published, I’m just gonna bitch about it a bit first). I think every book in a series should be as self contained as possible, with a beginning and middle and end. They should reward you for reading all the way through and giving so much of your time and energy to them. Making you wait until the next book to find out the answers to life or death questions is really just kind of rude.

Even with these two issues, however, this book is still far and away one of the best young adult supernatural fantasy novels released in the last few years. It has a fun and realistic young heroine, an edgy and exciting setting, and a lot of action and suspense and magic-y type stuff (which is to be expected coming from Steven A. Roman who does Marvel novelizations so has some action-writing experience). I would recommend this as far and away a better book series for teen readers than that OTHER teen vampire series (you know the sparkly one I’m talking about).