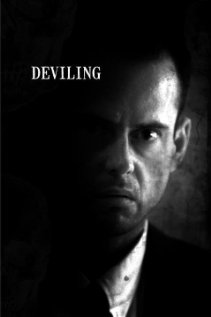 A woman experiences her worst fear after a failed relationship with a mortician.

Deviling is a thriller short film directed and created by Michael Sharpe. It runs for 14 minutes

In this stark coldly-toned film short we are introduced to Ronald (Robert Haulbrook) the mortician who is trying to cope with the recent breakup from his girlfriend Sharlene (Jodi Essex).

Sewing up dead bodies, offers no reward, though it does keep things quiet. Actor Robert Haulbrook provides a strong emotional performance of a man who just can’t face up to the rejection of Sharlene who doesn’t want anything to do with him. The work has taken its toll on him and as a consolation he promises Sharlene that if he can have her, then no one can. This leads to a reality that Sharlene will have to face for the rest of her short life.

The film short is superbly shot with high points going to Robert Haulbrook who really brings his A-game on an dynamic level. Use of angles and perspectives prove that Michael Sharpe knows his way around the camera. As a premise, the story was too short for me to really invest any connection to the resolution leaving things at least on a story level to feel unfinished. Director Michael Sharpe would fair well with the right script and amount of content to play with. The look and feel of this piece wins points on a well put together finished product.