From horror-mastermind Uwe Boll (House of the Dead, Bloodrayne) comes the adrenaline-fueled next chapter in the epic action/adventure franchise as IN THE NAME OF THE KING 2: TWO WORLDS battles on to Blu-ray and DVD December 27 from Twentieth Century Fox Home Entertainment.

Dolph Lundgren (The Expendables, Masters of the Universe) stars as Granger, a lethal,
ex-Special Forces soldier who finds himself transported back to a mystical age of sorcery, dragons and savage hand-to-hand combat. This modern-day warrior has been summoned to defeat the forces of darkness and fulfill an ancient prophecy. But as he fights his way to the truth, Granger learns no one can be trusted — and one wrong move could cost him not only his life, but the future of his world.

With supporting performances from Natassia Malthe (Bloodrayne, Lake Placid), Lochlyn Munro (The Benchwarmers, White Chicks) and Aleks Paunovic (This Means War, I Spy), the IN THE NAME OF THE KING 2: TWO WORLDS Blu-ray and DVD are loaded with bonus material including Behind the Scenes, Commentaries from the Director and Writer plus more. Pre-book is November 30.

IN THE NAME OF THE KING 2 Special Features:

Tags In the Name of the King 2 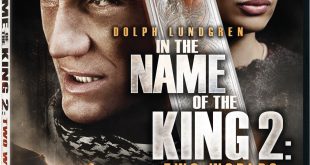 In The Name Of The King, There Will Be Another Horrornews.net Giveaway !