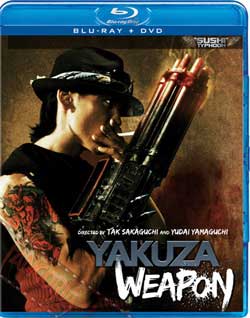 The Team Who Brought You VERSUS Have Returned with Another Hard-Edged Battle Royale Featuring
Tough Gangsters, Deadly Women and Cybernetic Penis Implants!

Stuntman-turned-director, Tak Sakaguchi, directs himself as a hard-hitting maverick who returns to Tokyo, only to discover his Yakuza father murdered, his family headquarters turned into a shady loan shop, and a powerful gang leader attempting to overthrow the entire criminal underworld! With rival gangs jacked up on “hyperdrug,” he must becomes a one-man, butt-kicking army – and things only get wilder when he loses an arm and a leg, only to have them replaced with more firepower than the entire Japanese military possesses

From the director of Mutant Girl Squad (Tak Sakaguchi), and Meatball Machine (Yûdai Yamaguchi) comes the “bloody awesome”* Yakuza Weapon, debuting on Blu-ray™ + DVD Combo Pack and DVD February 7th from Well Go USA Entertainment. Another warped film from the prolific Japanese production company Sushi Typhoon, Yakuza Weapon is based on the cult manga by Ken Ishikawa and stars stuntman-turned-director Tak Sakaguchi as a one-man, butt-kicking army out to avenge the death of his father with built-in firepower. The extensive bonus features include the behind-the-scenes featurette “The Making of Yakuza Weapon,” a discussion with Director Tak Sakaguchi and the spinoff short film Takuzo Weapon. Yakuza Weapon will be available in a Blu-ray + DVD Combo Pack for $29.98 SRP and on standard DVD for $24.98 SRP..

Yakuza Weapon has a runtime of approximately 106 minutes and is unrated. 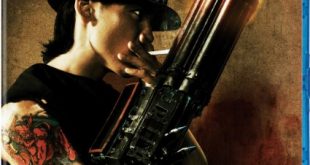