This is going to be a tough one to write. I remember the entire weekend vividly, though there were moments that seem a bit hazy, and others I will just keep to myself. This was the third HorrorHound Weekend I have attended in a year. This was BY FAR my favorite as well as being the MOST FUN! There may have been a few minor complaints (not really from me, mostly grumblings I heard in the halls), but overall a terrific show, well organized, and almost twice the size of the show they had last year in Cincinnati. What I found to be the most interesting was how approachable and friendly the guests were at this show. It was unbelievable! The show headliner was sitting with my entourage for over an hour just hanging out and chatting. From my personal experiences, I had never seen anything like this. So lets’ give you guys a bit of a rundown.

For the most part, Friday was a mellow day. There were a decent number of people in attendance but not over crowded. The longest I waited in line to meet anyone was maybe 10-15 minutes and that was for Michael Rooker. Staff was only allowing four people at a time into the room and it seemed to work. Rooker also happens to be a really great guy, taking the time to chat and joke around with everyone. After Rooker, I took my first foray into the first dealer room. There is always so much stuff to look at, so much stuff to buy, and always never enough money to spend. During the time in the dealer rooms, I also stopped to meet Tom Towles (great guy), Alex Winter, Thom Mathews, James Duval (the coolest guy ever), and of course stopping to talk with the legend that is Lloyd Kaufman. The highlight of the evening was watching the drunkest fool I had seen in a long time, stealing food from the buffet in the bar. He got off with a warning the first time but the second time he was caught by Doug Bradley (and Bradley was pissed). Kind of surreal and the whole time I was thinking Bradley was actually going to tear this guys soul apart. A fun day all around though incredibly long with the 5hr drive tacked on.

Saturday was just a ridiculous day. Not bad by any means, there was just so much going on and so many people. The first part of the day I was able to make it to a few vendors and pick up a few things. I was able to snag “Hardware”, “The Exterminator” and “Intruder” on blu-ray. The “Intruder” disc I walked away with was very limited, inside it includes on a burned disc the original workprint that is limited to 500. Kind of awesome, especially if you were a tape trader back in the day. Also found a vendor, Knee-High Horror, that sells miniature stand-ups that were really freaking cool. I picked up one (though I wanted more), the “Haute Tension” one that I immediately took and had signed by Mr. Philippe Nahon who was a terrific fellow and took a pretty funny picture. Saturday was CROWDED. So crowded that at points in the mid-afternoon, traffic came to a stand-still in the hallways. From what I understand, the fire marshal even showed up. This was only for a few hours in the middle of the afternoon. There was also an issue with some of the guests having to cancel. HorrorHound made the mistake (I thought it was) of booking guests who currently star on one of cables top programs, “The Walking Dead”, two of which were unable to attend and canceled last minute. I have been to enough shows to know that, though disappointing to some, these things happen. Especially when involving busy actors. Schedules change, shooting runs over, and that was the case with Norman Reedus and similarly to Jon Bernthal. No biggie, there were just many rumors floating around during the day and made some people rather unhappy. Also made it a point to check out a screening of “Chillerama”. A really fun film that plays extremely well to a crowd of half-drunk horror fans.

For an after party, HorrorHound has the unique ability to throw a party at the CoCo Keys Water Resort within the Crowne Plaza Hotel. Much more fun than last year and I just couldn’t get over how many of the celebrities were swimming, sliding, and drinking alongside everyone. Kind of interesting, had Anthony Michael Hall sitting with us at our table for a good portion of the evening. Nice guy and I also learned he is planning on directing an independent film as well as returning to the SyFy series “Warehouse 13”. I also hung out with James Duval who revealed that he recently recorded an audio commentary with Gregg Araki and his fellow castmates for an upcoming special edition of “The Doom Generation”. Michael Rooker was also in attendance. Pretty awesome having a beer with and having him wish me a happy birthday (best way to spend a birthday)!! When the waterpark party ended, the halls and the bar filled up and the rest of the evening is best kept secret.

Sunday was rough. I didn’t crawl into bed until well after 4am and had to be packed and checked out by 11am. After that rush I made it to the “Friday the 13th part 6” panel. It ran for close to 45min and was fun to listen to everyone talk. Especially director Tom McLoughlin, who had the most insight into the history of the film and how he planned to make a satire while always treating Jason seriously. I was a little disappointed in the fact that Jason himself, CJ Graham, had to cancel, but everyone else was great. I made a few final purchases and stopped to say bye to a couple of the celebritites we spent time with over the weekend. Took my last couple of minutes to meet Doug Bradley and pick up Kane Hodder’s autobiography “Unmasked”, then left the place behind.

Aside from the overcrowding on Saturday afternoon, this was BY FAR one of the best shows I have attended. HorrorHound really knows how to put on a terrific show and the celebrity guests were terrific. You really should try and make it to one of their shows. You won’t be disappointed. 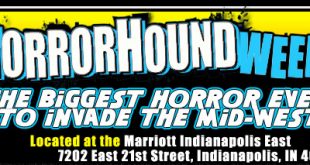