Somehow I managed to scrounge up enough cash and get time off work to attend HorrorHound Weekend Indianapolis, March 25th-27th at the Indianapolis Marriot East. This is only my second time attending a HorrorHound show and I have to admit they are tremendous events and very well organized. I will try to keep this short and entertaining. Plus much alcohol was consumed, starting before I was even able to check in. So I have many hazy memories and honestly, I am still trying to recover.

The event was pretty crowded from the get go and the first order of business when walking in to The HMA sponsored Mask-Fest room, was being greeted by Robert Hall, director of “Laid to Rest” and the upcoming sequel “Chromeskull”. We talked a bit about the first film but he is really excited about the sequel and filled me in on some info. We should look for the film around September and to expect a much larger body count. Also in attendance was Chromeskull himself, Mr. Nick Principe.

This was his first convention appearance and seemed a bit quiet at first but his enthusiasm for the character really began to shine through during the panel discussion where they premiered two clips from the film, one of which featured Brian Austin Green as an accomplice to Chromeskull who only communicates to him through a computer. Green’ character wants to be in on everything. There is also a captured young lady who appears as if she will be a victim. The second scene featured Chromeskull in action, a terrific murder scene with a rather gruesome knife to the side of the face. Robert explained that the new film picks up directly where the first ended and that they spoke with doctors about the possibility of face reconstruction. If you have seen the first film then you would know why, the doctors told them it was possible, since a man in Russia had his face completely torn off and survived. This film is something I am really looking
forward too.

The convention was set up in 6 areas total, which included two screening/panel rooms, the Mask-Fest, the main vendor/celebrity room, a horror host room, as well as a room just for the larger named celebrities like The Boondock Saints’ Norman Reedus, Sean Patrick Flannery, and David Della Rocco. This years headliner was Corey Feldman. Other celebrities in attendance, Bill Moseley, the legendary Barbara Steele, Ken Foree, Sid Haig (who told me, in his exact words, was hungry as f–k!!!), Kristanna Loken, a “Killer Klowns” reunion, and many others. I promised Lloyd Kaufman a plug in my next write up so here it is: READ “DIRECT YOUR OWN DAMN MOVIE” and “PRODUCE YOUR OWN DAMN MOVIE” great reads. Don’t forget that the 2011 edition of the Tromadance Film Festival is April 22-23, at the Showroom Theater in Asbury Park, NJ. Visit Tromadance for more information.

The rest of the first evening consisted of a sideshow presentation, pole dancers, magicians, and more booze than I care to remember. The rest of that evening was rather hard to remember except for sitting in the bar and turning around to see some girl pushing Norman Reedus and Sean Patrick Flannery in a luggage cart up to the bar.

Saturday I somehow managed to crawl out of bed early and make it to the Vincentennial: Vincent Price Super 8 Film Festival. It featured condensed versions of films like “Savage Justice”, “The Raven”, “Vincent Price Trailer Reel”, and more all shown on Super 8 film with sound. The highlights were “The Mad Magician” which was shown in 3D as well as my favorite Tim Burton film “Vincent”. The line for Corey Feldman was wrapped down the hall and outside. It was routed out of the way but the average wait time was over four hours and with so much to do, I had to pass.

I attended a panel for “Halloween III: Season of the Witch” that featured director Tommy Lee Wallace, mask maker Don Post, the assassin (and former Michael Myers) Dick Warlock, as well as the films stars Stacey Nelkin and the legend that is Tom Atkins. This was fun to watch since most of the discussion were just stories of how they enjoyed working on the film. Wallace telling a story of how he and DP Dean Cundy were almost killed by Warlock when a car stunt went wrong, Atkins remembering the wrap party and drinking too much and smoking (not cigarettes) too much and crawling back to his room. There was good stuff here. Saturday afternoon was also host to a special photo-op with Mr. Sid Haig, dressed as Captain Spaulding. Yes, I partook and the picture turned out pretty funny.

Saturday was by far the busiest day of the con, many times people were shuffled around in order to disperse crowds that were causing fire hazards. It was almost impossible to shop since everything was so congested but I did manage to meet Tom Atkins in that time who may be one of the nicest guys I have ever met. When I spoke to him Sunday, he had still remembered us from the day before. He spent several moments talking to us and he even dropped the line “Thrill me” from “Night of the Creeps”.

The event closed at seven for the day and the after party festivities commenced shortly after. Apparently, they would have started sooner but a certain Corey held things up.

The Invisible Man Corp. Sideshow warmed the place up with their amazing and hilarious brand of circus sideshow entertainment. They were followed by the costume contest. There were some pretty amazing costumes. But the main event for the evening was a live performance by Mushroomhead. They delivered an incredible performance and by the end of the show I think they won over many new fans.

Afterwords, the halls were filled with attendees and celebrities alike, chatting, drinking, and who knows what else. The cops showed up several times as did the fire department. Good times!!!

Sunday was a much more mellow day. Everyone was moving in slow motion and the halls were mostly quiet. Mostly people were just taking their last strolls through the dealer rooms for last minute deals. I took the time to meet “The Boondock Saints” stars Flannery, Reedus, and Rocco. All were great guys but Reedus took the time to ask me a few questions about the shirt I was wearing and hopefully I turned him on to “Dr. Horrible’s Sing-A-Long Blog”. I took another few moments to speak with Kaufman who once again reminded me to plug his books and Tromadance. So don’t forget the Tromadance Film Festival is April 22-23, at the Showroom Theater in Asbury Park, NJ. Visit Tromadance for more information. And if you do read this Lloyd, I reviewed them on Amazon too.

We said our final goodbyes then my wife (we celebrated our five year anniversary there), sister-in-law, friend, and myself left behind an incredible weekend that left me sad (going to be 8 months till the next HorrorHound show) and inspired (thanks Robert, Nick, and Lloyd) to get back to writing which is something I love to do. Terrific show and one I won’t forget any time soon. 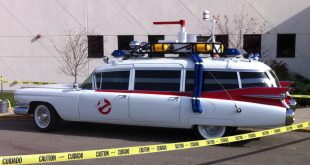