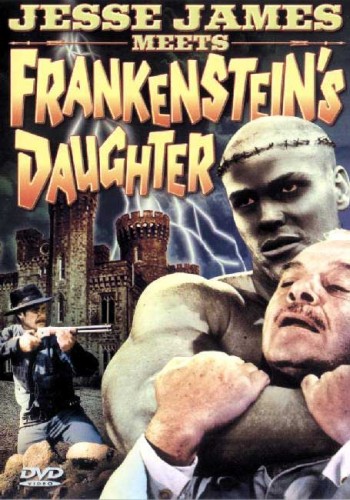 SYNOPSIS:
“Legendary outlaw of the Old West Jesse James, on the run from Marshal MacPhee, hides out in the castle of Baron Frankenstein’s granddaughter Maria, who proceeds to transform Jesse’s slow-witted pal Hank into a bald zombie, which she names Igor.” (courtesy IMDB)

REVIEW:
This week’s public domain nugget is a little anti-classic with the self-explanatory title of Jesse James Meets Frankenstein’s Daughter (1966). Yes, you heard right, I’m discussing a western, make no bones about it. So strap on your stirrups, pull out your six shooter and get ready to ride with me into the sunset as we tolerate Jesse James Meets Frankenstein’s Daughter. 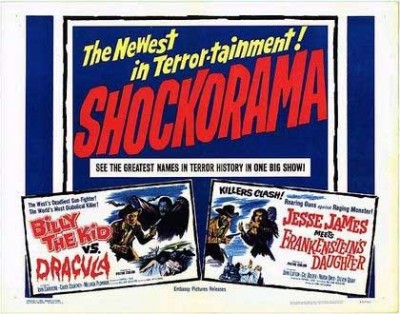 Produced in 1966 as the other half of a double feature with Billy The Kid Versus Dracula (1966), could you think of a worse premise for a low-budget western-horror hybrid film? It must have been a very slow year for doggy director William Beaudine. He was between television shows at the time, having finished with Rin-Tin-Tin (1959) and taking a break from Lassie, also known as Jeff’s Collie, to make this, a fictionalised version of the real-life western outlaw Jesse James’s encounters with the fictional granddaughter of the movie’s title, that of course being the famous Doctor Frankenstein.

John Lupton, who plays the part of Jesse James, is actually a bit too old for the role. When the film was made, Lupton was already thirty-eight years old. The real-life Jesse James died before his thirty-fifth birthday, and is probably still spinning in his grave after this piece of shhhh…lock was released, although John Lupton does have a star on Hollywood Boulevard which is more than Jesse James can say. I guess it’s for his work on Broken Arrow (1956), or maybe for his bit parts in Kung Fu, Ironside, Days Of Our Lives or The Time Tunnel, or any of the other 137 television shows he appeared in. He went on to do volunteer work for the Multiple Sclerosis Association and the Special Olympics, and unfortunately passed away in 1993 of so-called ‘unreported causes’ at age sixty-five. I happen to know for a fact he could never get over the embarrassment of Jesse James Meets Frankenstein’s Daughter, and that’s what got him in the end. 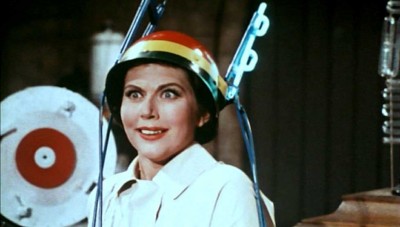 Narda Onyx plays Doctor Maria Frankenstein, and I suppose being an Estonian-born German speaker living in Sweden before fleeing to England and then to Canada, makes her accent just perfect for this role. This was her last movie and it’s probably for the best. I’m not sure if she could have ever have topped this particular role, and it’s probably a good thing she didn’t try. Personally, I would have liked to have seen her mud-wrestle that other female physician of the old west, Doctor Quinn Medicine Woman, but that’s just me. 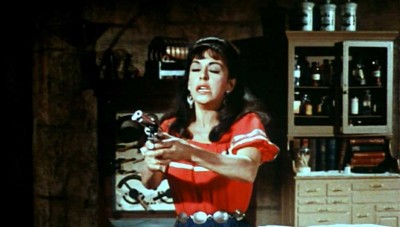 Estelita Rodriguez aka the Cuban Spitfire plays her final role as well, as the Mexican servant girl Juanita. And that is a pity. She passed away under so-called ‘mysterious’ circumstances, too, just a few months after filming this movie, while preparing to play Lupe Valez, the Mexican spitfire, who also died in mysterious circumstances. Coincidence? Probably.

Steven Geray is a passable Doctor Frankenstein, but in those days just having a European accent was enough for most horror films, and after working on The Donna Reed Show and The Dick Van Dyke Show, I’m sure he appreciated the challenging new role. Naturally enough, even with all the rootin’, tootin’ and shootin’ going on (what the hell does that mean, anyway?), this is nevertheless a Frankenstein film, so go on – guess the plot! No hints now. At some point, without giving away any spoilers, we just know Jesse James is going to bring his wounded muscle-bound pardner to the doctor, although he soon wishes that he had picked a different physician. There’s a very good reason this was nominated for a Golden Turkey award.

Jesse James Meets Frankenstein’s Daughter was shot in just eight days using lab equipment provided by my old friend and prop-man Kenneth Strickfaden, who used the same laboratory equipment in the original Frankenstein films made by Universal, as well as Mel Brooks wonderful Young Frankenstein (1974). Ken was an electrician, set designer and effects genius who created pseudo-scientific apparatus for over a hundred different motion pictures and television shows, from the original Frankenstein (1931), Wizard Of Oz (1939) and The Mask Of Fu Manchu (1932), to television’s The Munsters. In fact, Jesse James Meets Frankenstein’s Daughter is one of the few times Ken’s equipment was ever filmed in colour.

Contrary to the film’s title, it really should actually be called Jesse James Meets Frankenstein’s Grand Daughter. The movie combines cowboys, Indians, cops, robbers, Mexican villagers, Jesse James and his muscle-bound pardner, a European brother/sister team of mad scientists, and a monster. All it needs is an extra-terrestrial transvestite from transexual Transylvania, and you’d have a rather exciting, although very strange movie. Ooh, I just had a brainstorm! Let’s make an Australian supernatural soap opera and call it TranSylvania Waters! It would be like a cross between Dark Shadows and Kath And Kim – oh dear, Kath And Kim? Maybe not – just pretend I didn’t say anything.

Being a western as well, I was expecting a lot of action. That’s not what I got. Surprisingly, there isn’t that much excitement. The movie moves slowly and is rather tame, and I think the so-called monster is a bit of a dud as well. I’ve seen scarier things on the Letterman show. Although Jesse James Meets Frankenstein’s Daughter was actually quite bland, I’m still glad I watched it. It’s all in the title, you know, I just had to see what this movie was all about. For any fan of the old Universal monster movies, this should be on your list, maybe quite far down on the list, way, way, way down on the list, right after Wedding Videos With Drunken Auntie Maude – but it should be on the list all the same. Anyway, please join me next week when I have the opportunity to give you another swift kick in the old brain-box with another fright-filled fear-fest from the far side of…Horror News! Toodles! 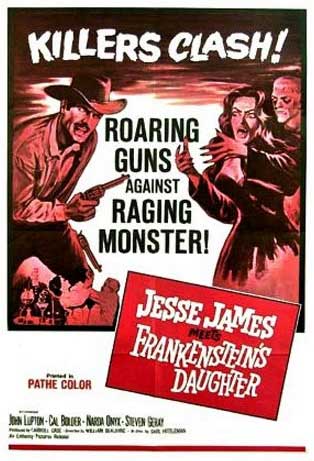