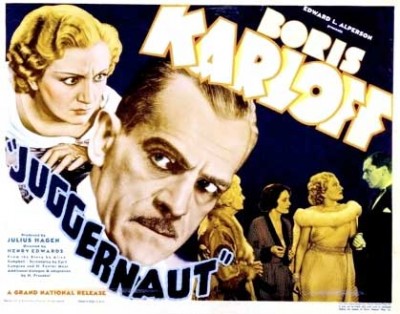 SYNOPSIS:
“Doctor Victor Sartorius, a dedicated but dying medical researcher working in Morocco, becomes frustrated when his funding is cut off and his experiments ended. He is approached by Lady Yvonne Clifford, the young and beautiful wife of wealthy but aging aristocrat Sir Charles Clifford. She has been carrying on an affair with a gold-digging army captain and offers Sartorius the 20,000 pounds he needs to continue his research if he will become her husband’s personal physician and covertly murder him. When Sir Charles’ son Roger enters the picture, it is clear that he is marked for death too. Only Sartorius’ altruistic nurse Joan stands in the way.” (courtesy IMDB)

REVIEW:
In the past I’ve discussed the more ordinary films of Bela Lugosi, Vincent Price and George Zucco, so this week I’ll attempt to redress the balance by writing about one of the more ordinary films of one of the truly iconic stars of horror cinema. This week I’m discussing the 1936 chiller Juggernaut (1936), starring the rich-man’s Glenn Strange, Boris Karloff, as the seemingly kind Doctor Victor Sartorius, a dedicated but dying medical researcher. It’s such a pity to waste a great name like that – he could be both evil and well-dressed. 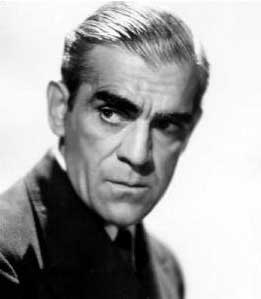 Yes, I know, this isn’t really a horror film as such, more of a crime thriller, but what the heck, it’s got Boris Karloff in it, so I’m discussing it. Brooding Boris plays the ailing doctor working in Morocco. He teams up with Lady Yvonne Clifford in a plot to poison her husband, Sir Charles Clifford, so he can collect the 20,000 pounds necessary to save his experiments and his funding. Roger Clifford, the son of Sir Charles, has also been marked for death. The only one who can stop the murder plot of Sartorius is Nurse Eve Rowe, played by the beautiful Joan Wyndham. 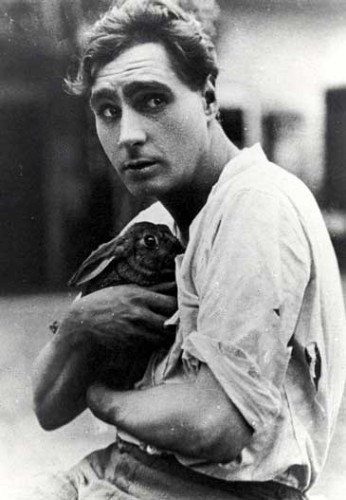 Let’s dispense with the less notable people first. Director Henry Edwards was responsible for some of the most boringly-named films in cinematic history. Let me glaze your eyes over with a few examples: His last film was The Vicar Of Bray (1937), but earlier he was responsible for such tedium as Beauty And The Barge (1937), Eliza Comes To Stay (1936), The Girl In The Night (1931), John Forest Finds Himself (1920), The Man Who Changed His Name (1934) and my two personal favourites, Are You A Mason? (1934) and What’s The Use Of Grumbling? (1918). The title Juggernaut comes from the novel of the same name. It was given a more ‘Henry-Edwards-esque’ title in the 1949 adaptation, The Temptress (1949). Juggernaut was also released under the title The Demon Doctor, but when Henry Edwards heard the new title, he had to admit himself to the Sunnybrook Home For The Excessively Nervous.

Actress Mona Goya, who plays Lady Clifford, made most of her films in France – so that’s enough about her. Sir Charles is played by Morton Selten, who is probably best-known as the king in the fantasy The Thief Of Bagdad (1940), an early biopic of Dick Cheney.

Juggernaut is one of the few Karloff genre movies from the thirties that is often overlooked and rarely discussed, and there are reasons for this. Despite the fact that the plot involves a scientist killing people so he can continue his experiments (which makes it similar to several other Karloff vehicles which are indisputably horror), Juggernaut not really a horror movie. What’s missing is the experiment itself. If they mentioned the nature of his experiments, I missed it, and it really doesn’t play any role in the proceedings. 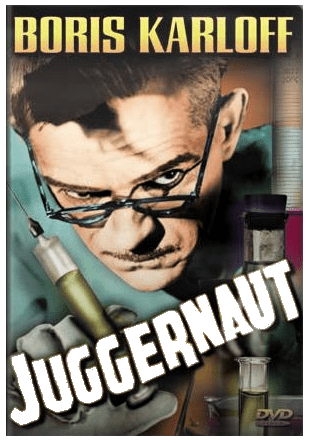 Karloff’s murders are either for the money, or to cover up evidence. So it’s not really horror, it’s more of a crime movie, and not a very good one at that. The script is weak, the set-up is confusing, talky and protracted, and the whole affair comes across as rather silly. Karloff does the best he can, but for some reason he hunches over during the whole movie and it’s distracting. However, Mona Goya overacts blatantly as the second wife of Sir Charles Clifford. Incidentally, actress Nina Boucicault is the daughter of Dion Boucicault, who was the first Irish playwright to have his work produced in England. When I think of Mad Scientists I often think of Boris, I don’t know if it’s because he plays the role of a mad scientist so well, or because I laughed my head off watching him in AIP and Roger Corman films. Anyway, please join me next week when I have the opportunity to inflict upon you the tortures of the damned from that dark, bottomless pit known as Horror News! Toodles!