Home | Ontario Get Ready To Scream DEAR GOD NO!

Ontario Get Ready To Scream DEAR GOD NO!

After wrapping up a successful week long theatrical run in Atlanta and Portland, the award winning Bikers vs. Bigfoot film DEAR GOD NO! is invading Ontario, Canada. James Bickert’s Super 16mm throwback to the 70’s packs in all the bullets, blood, boobs and booze one would expect from the golden era of exploitation horror.

DEAR GOD NO! tells the heartwarming story of The Impalers, a motorcycle club who just wants to be free. Free to rape, pillage, murder, drink and snort their way across the Southern landscape. They find a seemingly perfect hideout/home invasion opportunity in the off-the-path home of Dr. Marco a disgraced cryptozoologist living in seclusion with his emotionally-dead daughter Edna. There are some seriously strange goings-on at the good doctor’s home…there’s SOMETHING locked in his basement that may or may not have something to do with the genetic experiments he’s conducting, and there’s SOMETHING in the woods outside his house that’s been killing off the local fauna. What seemed on the surface like the perfect rape-and-murder hangout soon becomes a battleground where The Impalers must fight for their lives to keep from becoming victim to all manners of insane and horrific weirdness.

This fun midnight movie recently picked up The “Audience Award for Best Feature film” at both Pollygrind 2011 and The Corpsedance International Horror Film Festival. DEAR GOD NO! also won “Best Exploitation Film” at Pollygrind and The Arizona Underground Film Festival.

“The audience response has been tremendous,” say’s Bickert.

“Everyone is really getting into it. It’s developing quite the party atmosphere so naturally we wanted to take it on the road so we could keep enjoying it with a live crowd. I’m very excited to see the reaction in a horror haven like Ontario. Lead Impaler Jett Bryant, SPFX artist Shane Morton and me will be attending the screenings in Toronto and London so come out and have a get rowdy with us.”

The Toronto and London show will also feature massive giveaways of the DEAR GOD NO! poster illustrated by Tom “The Dude Designs” Hodge who is known for his retro posters for Hobo With A Shotgun, The Innkeepers and Father’s Day. 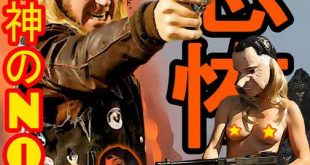