If you haven’t heard of ‘Dear God No!’ yet, you are not alone. DGN is quite possibly the best kept genre secret out there right now. It is a retro biker-rape-revenge film… With a dash of Bigfoot. Helmed by “Dumpster Baby” director, James Bickert, DGN is throwback to everything that makes movies cool. A high-concept, practical effects driven (read: little to zero CGI) thriller that would make some of the founding Ozploitation directors sh*t their pants.

Here is the official synopsis:

Grab some popcorn, gas up the jalopy and grab your favorite girl. Big World Pictures presents the retro Bikers vs. Bigfoot feature film DEAR GOD NO! A thrill ride here to save cinema by delivering all the carnival fun of a 1970’s drive-in movie. On the run from bikini clad machine gun fire, a group of outlaw bikers attempt to seek refuge in a mountain cabin only to fall victim to a crazed scientist and his hunchback assistant performing hideous experiments more deranged than the human mind can handle. What is lurking in the woods making escape impossible? Could it be the legendary… BIGFOOT!

I have been lucky enough to sit down with the director and producers of this film, as well as visit the set during shooting and let me assure you, there is nothing else like it. Shot entirely on 16mm film, the movie has been treated like a lost feature from the 70’s as opposed to an homage to films of the era. Producers Shane Morton and Nick Morgan went to painstaking lengths to ensure that they were confined by the same limitations that movie productions of the era would have been subjected to.

DGN is currently in post-production and is expected to premiere in time to hit the Summer festival circuit.Stay updated by joining the movie’s Facebook page. 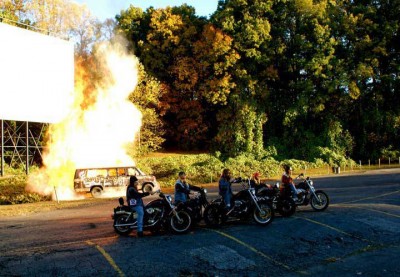 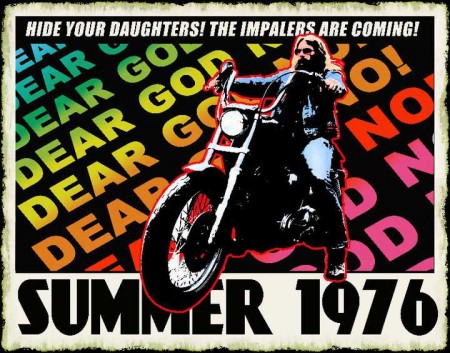 Ontario Get Ready To Scream DEAR GOD NO!