Book Review: The Universe Speaks: The Love and Pain of 2012-2025 – Author Roar Sheppard 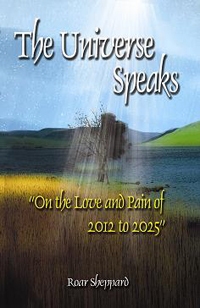 I’m always a sucker for new information or perspectives on 2012. I think maybe it’s that “unknowing” that eats at me the most. Although I don’t think authors or experts can tell the future, they can surely prepare you for it. This and many other reasons are why this book is great entry into that arena. Roar Sheppard as we are told has been at this for almost 15 years. His studies and exercises have attuned him to place that most of us will never get. He speaks of light beings, Pleiades and changes coming soon. And yet, my gut reaction is to just continue what I’m doing, living status quo and not buying into anything that will misled me. Though I have to ask that serious questions of what if, what if I don’t take action and why should I doubt someone who is clearly more educated on the matter.

This segues me into my review on this book. It seems honest, a bit weird and more so kind of scary. So we are the 3rd dimension prepping for the 5th? Is that also like what they are saying about the age of Aquarius? The book focused on the element of love and the universe. I fully understand that we don’t understand what we truly are. Though even with the number of books on this subject, I feel that something is missed. Roar Sheppard takes us on mental journey as he details his conversations with Mother Gai and various entities. The conversations themselves are sometime hard to follow…meaning, I wish they would have began them with …”Mother Gai” and so one to help us separating open from the other. I think I got it, but at times felt like I was associating the responses wrongly. I’m not sure how the public will respond to this in whole. Mainly because we have changed as a society and don’t really respond to the Beatles “All you need is love” like we used to.

Then again, maybe that’s the problem. Roar Sheppard preps us in his book for this upcoming thought journey and details what is “really” going on with the world. Its; definitely quite intriguing and quite compelling. The book doesn’t stop at the 2012 marker. It suggest our transformation during the 2012 to 2025 period which is right in line with my life span.

Now, alien aficionados will really take interest in the fact of beings being past civilizations that have visited, left and contain higher knowledge of our purpose in the structure as a while. Do we have it wrong, is life just a state in our journey and are we only here to learn and move on? Roar Sheppard tends to think so, so maybe its time for a revelation.

What separates this book from all the other 2012 themed books on the market?
I’ve read quite a few myself, so I know first hand on what to expect. I will say I was blown away in a whole new way on this release. First it takes a very simple but intelligent approach by using a question and anywhere format. The Q&A is answered with vital info from the Pleiades knowledge of how out universe and history is going to fall into place. We are told that we are entering our 5th dimension as a being and as a planet. This pass will happen as we pass thru the Photon belt which is happening now to be complete by 2013. What is remarkable here is a completely different perspective on out paradigm shift. Earth is explained as a training ground in which we have reached the and of our cycle. The passing which is much like a “Star gate” will not only change our environment but our evolution. This cycle which comes every 130,000 years is upon us and very much in line with how the universe is designed.

A message is given about who were are and what we are really meant for. This message states that the time for ultimate change and judgement is within our site as we head into this change of earth, matter and spiritual awakening. In the very least, I thought, this book and ones like it may find there way to conspicuousness before that opportunity has passed.

The Q&A is very much n line as to how we might ask ourselves…such as will our race be eliminated, what happens afterwards, is the sequence in line with the eMayan prophecies. I in fact couldn’t put this one down. And in the process of reading and review, I would turn to my wife and state, as bizarre as this all sounds, as science fiction as it all read, what if its exactly true? I think the read will be an eye opener and in the very least might start attuning readers thoughts to a concept that they can embrace. This approach is highly engaging and keeps things in simpler format as a whole.

In a sense the book presents as being very prophetic. It talks about 2012, and it talks about 2011. Where a few readers might have issues with is that some of the 2011 discussions have passed or are near passing without really coming to pass as written here. I didn’t let that bother me, as I still feel I have a reference now to compare to moving forward.

As we move into new territory, strange territory, it may be guides such as this one that help to seque the transition. While there is no way for me to know if the pages are the just the creation of fiction, it is believed by the author to be genuine. In fact he calls it a “gift from the universe, a guidebook. To our readers, I strongly suggest that you grab a copy of this book if only to prepare yourself for a sense of few under5tsanding. If these cosmic beings exist and if they have found a messenger than this collective of thought may hold your ultimate questions into the universe.