Book Review: That Which Should Not Be – Author Brett J Talley 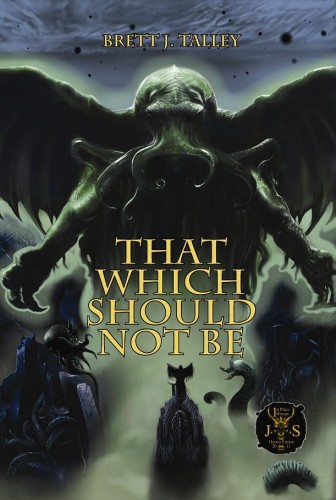 THAT WHICH SHOULD NOT BE

Something lurks within the darkness. A spell binding, crippling fear taunts the very hairs upon the nape of your neck. Your stomach lurches as your pulse quickens; prayers for salvation or at least a fast and painless death.

Talley’s odyssey into the unknown makes this tale a heart stammering page turner from beginning to end. From the onset we’re introduced to eccentric college professor Dr. Atley Thayerson.  A self consuming obsession with the occult possesses Thayerson to deploy his protégé young and impressionable Carter Weston on a quest for the ancient hallowed book Incendium Maleficarum.

En route across the European country side, a north eastern snowstorm confines the journeyman to a local village’s tavern. Seeking refuge there the locals warm to his despair. Each shares their own chilling story of encountering the paranormal and unexplained.

Jack paralyses us with fear recalling a tale of the arctic tundra and the ferocious Wendigo creature.

Daniel depicts his eerie memory in a barren Romanian countryside castle and the legend of Satanic ritual Walpurgis Night.

William weakens the grip on rationality with his story about serial killers in the Danver’s State Insane Asylum.

Captain John Gray ventures forth with his memory of a ghost voyage upon the vast seas.

That Which Should Not Be transcends to the present where Weston successfully attains the forbidden Incendium Maleficarum book reminiscent of the evil Necronomicon. The ancient finding exumes a proverb in tow, to be careful what you wish for; after all it may come true. Will the evil artifact unleash a primal force darker than any desire?

Talley’s use of present, to past and foreshadowing rivals that of any successful commercial author in contemporary horror fiction. His characters are well crafted, personable and allow us to root for the protagonists through and through.

Evidence of successful horror literature is when that story sticks with us, plagues us into sleeping with the light on, running back from taking out the trash-it sharpens our irrational fears and then pokes us mercilessly. Each tale in TWSNB stands on its own and knits well into one another, strengthening conflict and suspense. Shades of H.P. Lovecraft, Ray Bradbury and a dash of Rod Serling: Brett J Talley’s efforts here to provoke sheer terror begin with That Which Should Not Be.

That Which Should Not Be – Author Brett J Talley

Tags Brett J Talley That Which Should Not Be